Lycocerus wenchuani: A new species of Soldier Beetle from Taiwan.

Soldier Beetles, Cantharidae, are an extremely diverse and widespread group of elongate, soft-bodied Beetles related to Click Beetles and Fireflies. They get their name from the red colouration of one of the earliest species descried, which resembled the colour of the red jackets worn by British soldiers in the eighteenth century, rather than any particularly aggresive behaviour.

In a paper published in the journal Acta Entomologica Musie Nationalis Pragae on 15 July 2016, Yun Hsiao of the Department of Entomology at the National Taiwan University and Yûichi Okushima of the Kurashiki Museum of Natural History describe a new species of Solier Beetle from southern and southeastern Taiwan.

The new species is placed in the genus Lycoceras, an extremely specious Asian genus, with thirty six previously described species from Taiwan alone, and given the specific name wenchuani, in honour of Wen-Chuan Liao, who collected the first known specimen of the species and who is a citizen scientist who assists many Taiwanese taxonomists with the collection of material. The species is largely black in colour with yellow and brown markings, and reaches 4.5-5.0 mm in length. Females are slightly wider than the males, with slightly smaller eyes. The species was originally noted by the Jinshuiying Historic Trail in Pingtung County, but is thought to be present across south and southeastern Taiwan, at altitudes of 1000-1600 m above sealevel. Adults of the species appear from late spring into early summer. 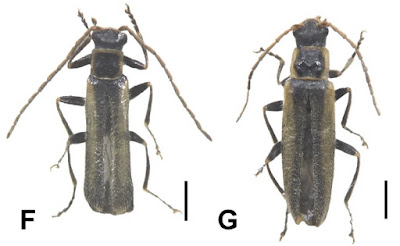 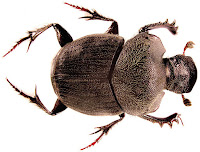 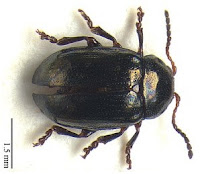 Notomela joliveti: A new species of Flea Beetle from Principe Island.                        Flea Beetles, Alticini, are highly specialized Leaf Beetles, Chrysomelidae, which get their common name from their highly modified rear legs, which enable them to make sudden long jumps when threatened. They are small for Leaf Beetles, though not exceptionally so...