Pristimantis prometeii: A new species of Rain Frog from the cloud forests of El Oro in southern Ecuador.

The tropical forests of Central and South America are home to almost half of the known species of Amphibians, and since about a quarter of these species have been described in the past decade, this is likely to be a severe under-estimation of the true diversity of Amphibians in these forests. The largest group of Amphibians in these American tropical forests is the Brachycephaloidea, a group of Frogs with an entirely terrestrial life-cycle, laying eggs in moist habitats, which develop directly into small Froglets and missing out on the Tadpole stage altogether. About half of the described Brachycephaloidians are included in the most specieous genus of terrestrial vertebrates known, Pristimantis, members of which are commonly known as Rain Frogs, which contains almost 500 species.

The new species is named Pristimantis prometeii, which refers to the Prometeo program of Secretaría de Educación Superior, Ciencia, Tecnología e Innovación of the Republic of Ecuador, through which Dan Cogălniceanu and Paul Székely received funding for their research in southern Ecuador. The Frogs are brown or green in colour with variable blotchy markings. Adult females reach 29.9–37.6 mm in length, males 20.4–24.9 mm. 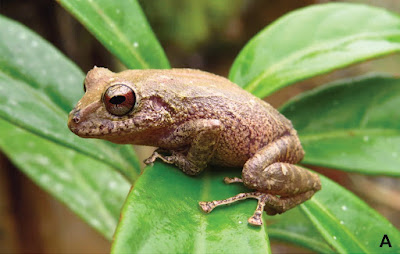 The species was found at three locations in the Reserva Buenaventura, at altitudes of between 878 and 1082 m. The species was observed in September in 2014 and 2015, generally after rain at night, when they could be found on leaves close to the forest floor (10-100 cm above the ground). 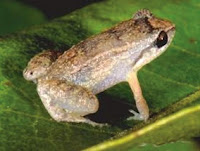 A new cryptic species of Microhylid Frog from Espírito Santo State, Brazil.                      Cryptic species are species which resemble one-another physically, and which cannot generally be separated using traditional taxonomic methodology, but which are nevertheless genetically and reproductively isolated. Genetic studies of many groups...
Follow Sciency Thoughts on Facebook.
Posted by Joe Bauwens at 20:52