Hominin footprints from 1 500 000-year-old deposits near Ileret in northern Kenya.

One of the features that serve to distinguish Modern Humans from our closest living relatives, the Great Apes, is an upright bipedal stance unlike that seen in any other Primate. Based upon analysis of fossil skeletons, it is thought that this gait and posture appeared in the earliest members of the genus Homo, with earlier Australopithicene Hominins thought likely to have had a more Ape-like gait. However this is based almost entirely upon analysis of the bones of the legs and pelvis, with foot bones extremely rare (a set of eleven isolated foot bones from 1.8 million-year-old deposits at Dmasini in Georgia have been attributed to Homo erectus, but beyond this the foot bones of early Homo are unknown). One method that has proved extremely useful when studying non-Hominin terrestrial animals is analysis of preserved footprints, which can reveal a great deal about both the posture and gait of the animals, however fossil Hominin footprints are also extremely rare; a set of 3.7 million year old footprints from Laetoli in Tanzania have been attributed to Australopithicua afarensis, but footprints assignable to early members of the genus Homo are extremely rare.

In a paper published in the journal Scientific Reports on 12 July 2016, a team of scientists led by Kevin Hatala of the Department of Human Evolution at the Max Planck Institute for Evolutionary Anthropology and the Center for the Advanced Study of Human Paleobiology at The George Washington University describe a series of Hominin footprints from the 1 500 000-year-old Ileret Tuff Complex in northern Kenya, and the implications that can be derived from these.

The tracks comprise 97 discrete footprints from five sites, representing 23 trackways made by 15-23 individuals (depending on whether some individuals made more than one trackway). The tracks were laid down in soft mud rich in volcanic ash close to Lake Turkana and covered by fresh sediment within a few hours of their formation. The footprints range from 20.5 cm to over 30 cm in length. 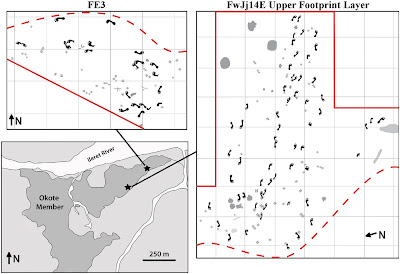 Schematic maps of excavated footprint surfaces at sites FE3 and FwJj14E. Map of the Ileret area (lower left) shows the locations of sites FE3 and FwJj14E, marked by black stars. Schematic maps of the excavated surfaces at FE3 (top left) and the FwJj14E Upper Footprint Layer (right) show the presence of multiple trackways across each of these surfaces. Print size analyses indicate that the groups of individuals represented at each site consist of predominantly males. Multiple trackways at FwJj14E show parallel directional movement and similar preservation states, suggesting that they could represent a group traveling together. Note that the schematic map of the FwJj14E surface has been rotated relative to North for visualization purposes. Solid red lines mark borders of the current excavations, and the same geological layers that preserve footprints are known to extend beyond these borders. Dashed red lines indicate the finite edge of the preserved surface, as areas beyond these lines have been lost due to erosion. The schematic map of the Ileret area was created by Neil Roach, using a map generated in ArcGIS software version 10.2. Hatala et al. (2016).

Based upon the size of the footprints the tracks are thought to have been made by individuals with an average adult body mass (the smallest set of tracks are thought to have come from a child, with all the others thought to be adults) of 48.9 kg. This is comparable to the average adult body mass of the modern Daasanach people (52.6 kg), who inhabit southwestern Ethiopia, southeast South Sudan and northwest Kenya, including the area around Lake Turkana, and also comparable to the estimated size derived for a series of 800 000-year-old footprints from Happisburgh in Norfolk, England, attributed to Homo antecessor, and considered to be the oldest-known Hominin footprints outside of Africa (48-52 kg).

1.5 Ma hominin tracks from Ileret, Kenya. Representative images of hominin tracks uncovered in the Ileret area between 2007 and 2014. These tracks come from five different sites within  about 1.5 km of each other. Some tracks show deterioration and overprinting, while many preserve fine detail, indicating that they were rapidly hardened and covered with sediment. No two sites represent the same continuous surface, as all come from different stratigraphic levels within the Ileret tuff complex. The total sample includes 97 hominin tracks produced by at least 20 different individuals. Hatala et al. (2016).

Three Hominin species are thought to have been present in the Turkana Basin 1 500 000 years ago, Paranthropus boisei, Homo habalis and Homo erectus. Of these only Homo erectus is thought to have been large enough to have made the Ileret footprints, the other species being considerably smaller. Morphological analysis of the footprints suggested that the weight distribution on the foot and gait of the track-makers was similar to (but not identical to) that of habitually barefoot Daasanach individuals living in the area today, but quite different to that of the makers of the 3.7 million year old footprints at Laetoli in Tanzania (probably made by Australopithicua afarensis, and certainly by an Australopithecine rather than a member of the genus Homo). 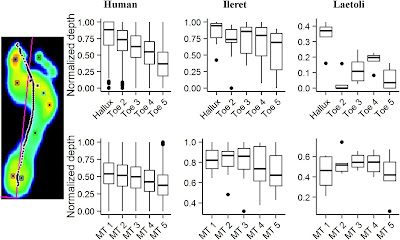 Forefoot depth profiles of modern human and fossil hominin footprints. Boxplots compare regional depth profiles of modern human footprints (n = 490 footprints from 41 individuals) to those of the 1.5 Ma Ileret (n = 11 footprints from 8 trackways) and 3.7 Ma Laetoli (n = 5 footprints from 1 trackway) Hominin tracks. Top row represents depths across the toes while bottom row represents depths across the metatarsal heads. In each plot, medial is left and lateral is right. The image at far left shows the distribution of pressure including the path of the centre of pressure, plotted as a dashed black line, during a typical human walking step. The overall forefoot morphology of the Ileret tracks closely resembles that of human tracks and provides evidence of a human-like medial weight transfer. The Laetoli tracks are distinct from those of Modern Humans and the Ileret Hominins, and reflect a different pattern of foot biomechanics. Note that scales differ only for the purpose of better visualizing the variation within the relatively smaller fossil samples. In all boxplots, the box encloses the 25–75% interquartile range, the bold line represents the median, and the upper and lower whiskers extend to the largest and smallest observations within a distance of 1.5 times the interquartile range above and below the limits of the box. Hatala et al. (2016).

Homo erectus is thought to have shown far higher sexual dimorphism than Modern Humans (i.e. the difference in size between males and females was more pronounced), for which reason it was considered to assign sexes to the makers of the tracks. Using this methodology it was calculated that sixteen of the trackways (representing 8-16 individuals) were made by substantially larger, presumably male individuals (the alternative hypothesis, that all the individuals were female, representing the size range of female Homo erectus individuals, with larger male footprints not present, was deemed to be less likely). This does not rule out the possibility that some of the smaller, presumed female, footprints were made by smaller, possibly subadult, males.

This high proportion of male individuals (8-16 adult males in a group of 15-25 individuals) is remarkable, in that it is unlike the population structure of any known Primate species, or indeed Mammal of any kind, and is unlikely to represent a reproductively viable population. Hatala et al. suggest that this may indicate that the trackways were made not by an entire population but by a sub-set of that population travelling with a specific purpose. This may represent the division of labour amongst a hunter-gatherer society, something which is known in both Modern Human and Great Ape populations today, or possibly the patrolling of a border of a territory held by one group of individuals against incursions by members of another group, behaviour which is known in both Modern Humans and Chimpanzees, and which in both cases is carried out by smaller groups of individuals from within a larger population, with those smaller groups predominantly or exclusively made up of adult males.

Hominin rib from Sterkfontein Caves. Sterkfontein Caves is a palaeoarchaological excavation site about 40 km to the northwest of Johannesburg in Gauteng State, South Africa, which forms part of the Maropeng Cradle of Humankind World Heritage Site has previously produced a... 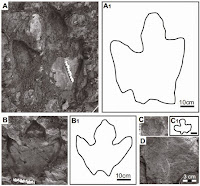 A Hadrosaurid Dinosaur trackway from the Denali National Park in Alaska.                           The preserved tracks of ancient animals such as Dinosaurs can provide insights into their lifestyles and biology that could not be determined by examination of bones alone, although such data needs to be interpreted carefully. Such studies can potentially provide data on herding or other social...