The Burnetiamorphs are a poorly understood group of Permian Theraspids (Theraspids are the group which gave rise to and and include the living Mammals, though Burnetiamorphs are not thought to be particularly closely related to the earliest Mammals or their direct ancestors) known from Southern and East Africa and Russia. The group has a somewhat limited fossil record; by the end of the twentieth century only two species had been described, one from South Africa and one from Russia, though since then the number has risen to ten species. The most commonly preserved part of Burnetiamorphs is a heavy bone boss, made up of the fused and thickened bones of the occipital region and the upper part of the braincase, though it is often hard to identify the different bone components in these dense structures, making them of limited use for understanding relationships within the group.


In a paper published in the journal Palaeontologia Africana on 23 March 2016, Christian Kammerer of the Museum für Naturkunde at the Leibniz-Institut für Evolutions- und Biodiversitätsforschung and the Evolutionary Studies Institute at the University of theWitwatersrand, records two previously undescribed Burnetiamorph specimens from museum collections. Both specimens originate in the Karoo Basin of South Africa, and both are considered by Kammerer to be too fragmentary to assign to a species, but they nevertheless provide insights into this little known group.

The first specimen described, TM 4305, comes from the collection of the Ditsong National Museum of Natural History in Pretoria. It comprises a weathered and only particularly prepared skull fragment, including the interorbital region, temporal region and dorsal occiput. Any details of where or when, or by whom this specimen was collected appear to have been lost, though it does have a label attached, identifying it as coming from the Tapinocephalus Assemblage Zone, making it Middle Permian in age. 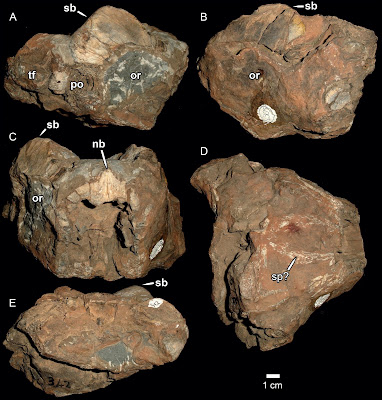 The second specimen described, NHMUK R871, comes from the collection of the Natural History Museum in London. This specimen comes with more detailed location information, having been collected by palaeontologist Thomas Bain (1797-1864) at a site in Tafelberg, Beaufort West, which produced a number of other, more complete and more studied, vertebrate fossils, all of which were assigned to the genus Tropidostoma; the location is therefore considered to be part of the Tropidostoma Assemblage Zone, making it Late Permian in age.

This specimen comprises a fragment of skull roof preserving the interorbital region and temporal roof to the anterior edge of the pineal foramen. It was originally identified as a 'Theriodont? Reptile' and subsequently as a 'Deinocephalian', but both a Deinocephalian in the Tropidostoma Assemblage Zone and a Theriodont with the extent of bone fusion and thickening seen in the specimen are highly unlikely. The pattern of bone fusion is, however, consistent with a Burnetiamorph, and Kammerer feels confident in assigning the specimen to this group. 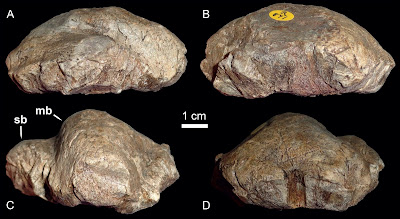