Five people have been confirmed dead in an outbreak of Cerebrospinal Meningitis in the Federal Capital Territory of Nigeria this week. Four deaths were recorded in the Durami area of Abuja on Tuesday 28 March 2017, and a fifth death in Dakwa (about 30 km to the northwest) the following day. The victims range in ages from 1 to 29 years, and all developed signs of the disease shortly before dying, though only two, one from Durami and one from Dakwa, have been fully autopsied. The disease has already killed about 270 people in an epidemic centred on Zamfara, Sokoto and Niger states this year, leading to concerns that a vaccination scheme, credited with saving many lives in the country and greatly reducing the annual impact of the disease, may be starting to fail as the disease adapts to the program. 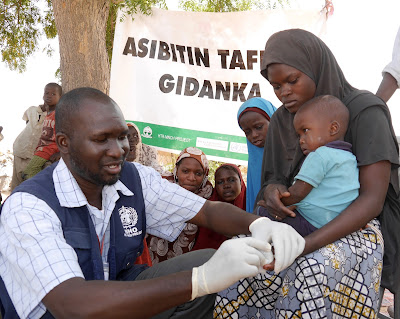 A member of a medical team adminisering vaccinations in Borno State, in northeastern Nigeria. A Clemments-Hunt/World Health Organization.

Meningitis, an infection of the covering of the brain and spinal column can be caused by a number of micro-organisms, though in West Africa it is usually caused by the Bacterium Neisseria meningitides, which causes annual outbreaks in during the Dry Season the African Meningitis Belt, which runs from the Senegambia region on the west to Kenya and Ethiopia in the east. Between five and ten percent of those infected with the disease die within 48 hours of the first onset of symptoms, with the very young most at risk. 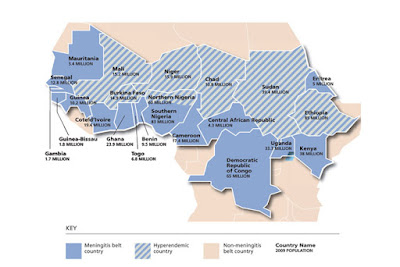 The countries of the Africa Meningitis Belt. David Simpson/PATH/Gavi.
Neisseria meningitides is a form of  Betaproteobacteria spread by salivary and respiratory fluids (i.e. by coughing and sneezing, sharing eating utensils etc.). About 10% of the population are thought to be carriers of the disease, without apparent ill effect, but causes disease in others, particularly in children and young adults, occurring as an annual epidemic in parts of Asia and Africa. Symptoms of the disease include fever, headaches, confusion, stiffness and septicaemia, this later being extremely dangerous; patient with  meningacoccal septicaemia develop a vivid purple rash, and about 50% of patients with this symptom typically die.
Nigeria suffered a particularly sever outbreak of Meningitis in 2009, when over a thousand people lost their lives, though since then an extensive vaccination program has been carried out, with an emphasis on targeting young children, which was thought to have brought the disease largely under control, with only 33 fatalities were recorded in 2016. This is likely to indicate the presence of a new strain of the Bacteria, which the current vaccine does not provide protection  against. 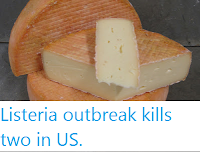 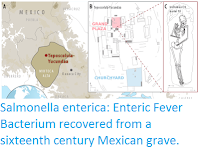 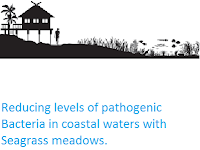 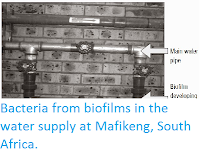