A cleanup operation is underway in Queensland, Australia, after Cyclone Debbie made landfall between Bowen and Airlie Beach on Tuesday 28 March 2017, leaving a trail of devastation about 50 km across. One man is in hospital with serious injuries following a wall collapse in Prosperine, and authorities are reporting a single known death, though they have not yet released any details of this, and have expressed fears that there may be further casualties in remote communities cut off by the storm. Around 25 000 people were evacuated from homes directly in the path of the storm, and about 48 000 homes have been left without power, with warnings being issued about the dangers of downed power lines. Flooding has been reported around Prosperine, and evacuees returning to their homes are being warned to expect extensive damage. 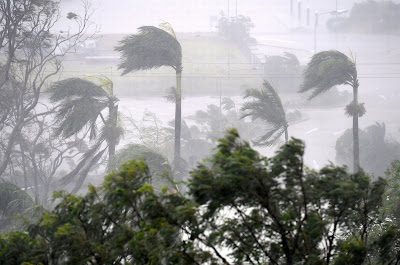 Trees being battered by high winds and rain at Arlie Beach as Cyclone Debbie passes. Reuters.

Cyclone Debbie is recorded to have been a Category Four storm as it made landfall, that is to say a storm with sustained windspeeds in excess of 209 kilometers per hour (a sustained windspeed is defined as a windspeed recorded continuously for periods in excess of a minute), though the storm has lost energy as it has passed over land, though high winds are expected in the area till at least Wednesday 29 March. 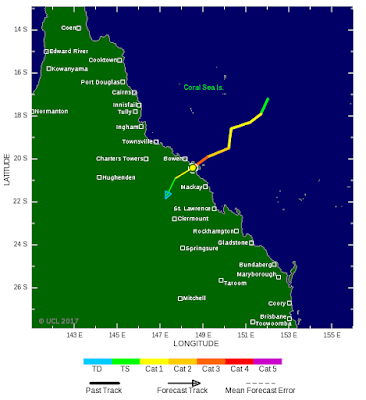 The passage of Cyclone Winston till 07.00 GMT on Tuesday 28 March 2017  (thick line) with its predicted future path (thin line, circles represent the margin of error on the predictions). Colours indicate the strength of the storm. Tropical Storm Risk.


Tropical cyclones are caused by solar energy heating the air above the oceans, which causes the air to rise leading to an inrush of air. If this happens over a large enough area the inrushing air will start to circulate, as the rotation of the Earth causes the winds closer to the equator to move eastwards compared to those further away (the Coriolis Effect). This leads to tropical storms rotating clockwise in the southern hemisphere and anticlockwise in the northern hemisphere.These storms tend to grow in strength as they move across the ocean and lose it as they pass over land (this is not completely true: many tropical storms peter out without reaching land due to wider atmospheric patterns), since the land tends to absorb solar energy while the sea reflects it.

View of Cyclone Debbie from the International Space Station. Force 13. 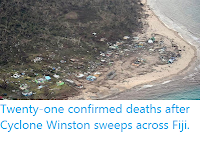 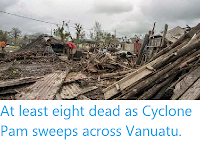