At least thirty seven people have been killed, with more than sixty wounded and many more missing, following an attack on a convoy of buses carrying workers to the Boungou Gold Mine in Gnagna Province in eastern Burkina Faso. The incident happened on the road between Fada and the Boungou Mine site, on Wednesday 6 November 2019, and began with with an explosion that destroyed a military escourt vehicle, followed by a number of gunmen opening fire on the buses. It is unclear how many of the dead are employees at the mine, which is owned by Canadian mining company Semafo, and how many were members of the Burkinabe security forces.

The approximate location of the 6 November 2019 attack. Google Maps.

This is the latest in a series of clashes at and around gold mines in Burkino Faso, which have claimed dozens of lives since September 2017, as well as numerous injuries, and damage to both mining facilities and local villages. In January this year a Canadian geologist was kidnapped and killed, and a number of other foreign workers have been held for ransom, and in October more than 20 people were killed in an attack on a mine at Dolmane in Soum Province, in the north of the country. Like may other African countries, Burkino Faso has granted concessions to mining companies in areas where small-scale artisanal mining has traditionally helped to supplement the incomes of subsistence farmers. This provides an important source of revenue for governments, however, little of the money from such projects tends to reach local communities, which often leads to ill feeling and attempts to continue mining clandestinely, which can result in tension or even clashes between mine operators and local populations.

However the recent large scale attacks on mines in Burkina Faso do not appear to have be directly aimed at the gold industry itself, but rather to have been part of a widening campaign against the central government in Burkina Faso, in which economic assets and infrastructure are attacked as often as military targets. The two main militant groups in the area, Ansarul Islam and the Macina Liberation Front, both seek the re-establishment of the short-lived state of Macina, which occupied parts of what is now northern Burkina Faso, eastern Mali, and western Niger, between 1818 and 1862. Both groups claim both religious authority and to represent populations that are often ignored by central governments in their respective nations, but neither has, to date, sought to hold any territory or establish any form of alternative administration. 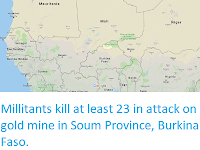