A Chambered Glass Sponge from the Early Devonian of northern Spain.

In a forthcoming paper in the journal Acta Palaeontologica Polonica available online from 17 June 2013, Martin Nose of the SNSB-Bavarian State Collection of Palaeontology and Geology, Radek Vodrážka of the Institute of Geology at the Academy of Sciences of the Czech Republic and Luis-Pedro Fernández and Isabel Méndez-Bedia of the Departamento de Geología at the Universidad de Oviedo, describe a species of Chambered Glass Sponge from the Early Devonian of northern Spain.

Casearia devonica is a straight or branching Chambered Sponge, comprising up to 18 chambers, each 0.5 to 5.0 mm in height. It was discovered in shales of the Valporquero Formation near the village of Colle in the Cantabrian Mountains in northern Spain. These shales are thought to have formed in mud mounds between Coral outcrops, in waters bellow the storm wave-base. Modern Glass Sponges no longer form similar chambered shapes, but they do typically live bellow the wave-base, being found across the globe in waters deeper than 100 m. 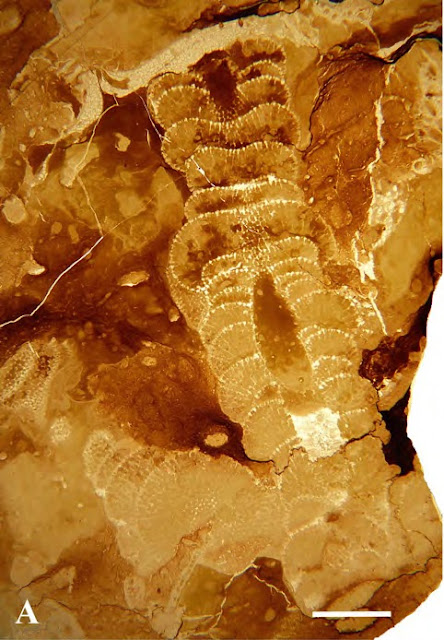