Five people have died after a landslide struck a house in the town of Santa Domingo in Antioquia State in northeast Columbia in the early hours of Thursday 14 November 2013. The dead have been identified as Nebardo Hernandez (29) his 26-year-old wife, and their three sons, two of whom were under five years old.

The incident happened following a night of torrential rain. Landslides are a common problem after severe weather events, as excess pore water pressure can overcome cohesion in soil and sediments, allowing them to flow like liquids. Approximately 90% of all landslides are caused by heavy rainfall. Such incidents are common in mountainous Columbia, particularly during the countries two rainy seasons, between April and June and September and November. This two rainy seasons per year pattern is typical in equatorial countries, with rainy seasons around the equinoxes and dry seasons around the solstices. 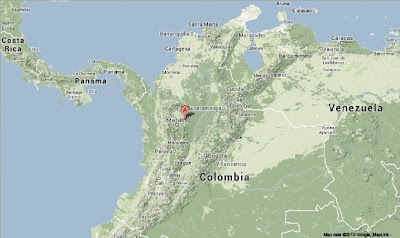