A new species of fossil Pig from the early Pleistocene of Ethiopia.

Pigs (Suidae) are found throughout the Old World. They are members of the Artiodactyla, the group that also includes Cattle, Deer and Antelopes (and, curiously, Whales), though they are considered less highly derived than other members of the group, lacking a rumen (additional stomach compartment) and retaining four toes on each foot (though two of these are held permanently above the ground). The earliest fossil Pigs appear in the Oligocene of Asia.

The new species is placed in the genus Kolpochoerus, which has eight previously described species from the Pliocene and Pleistocene of Africa, and which is thought to be ancestral to the modern Giant Forest Hog (Hylochoerus meinertzhageni), and is given the specific name phillipi, in honour of the South African paleoanthropologist Phillip Tobias of the University of the Witwatersrand, who passed away in 2012.

Kolpochoerus phillipi is described from a partial cranium and associated mandible and a second partial mandible, as well as a series of detached teeth. It is similar in size to the skull of a modern Giant Forest Hog, and is thought to be about 2.5 million years old. 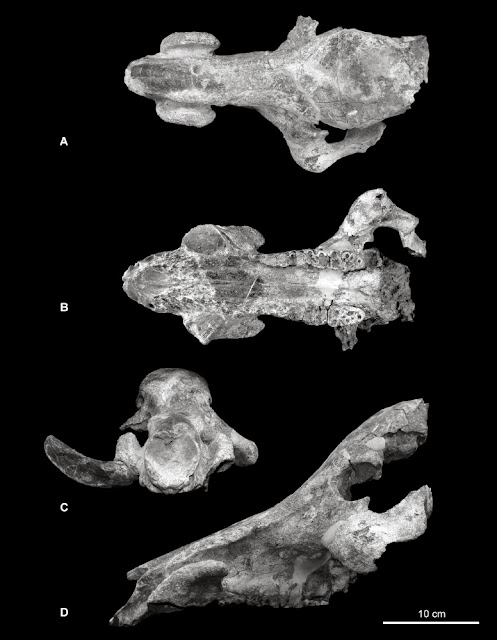 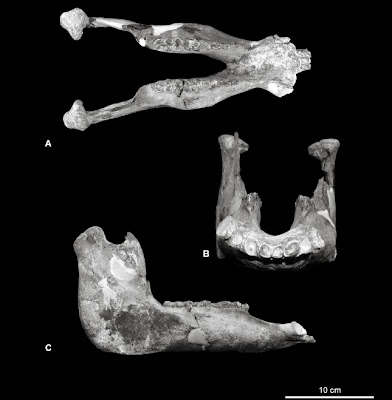 See also A fossil Porpoise from the early Pliocene of northern Hokkaido Island, Japan, A fossil Neobalaenine Whale from the Late Miocene of Argentina, How fencing the Tibetan prairies is effecting the endangered Przewalski’s Gazelle, A Giant Camel from the mid-Pliocene of Ellesmere Island in the Canadian Arctic and Small Llamas from the Late Pleistocene of Central Mexico.