The new species of Anthia from the Marquesa Islands in French Polynesia.

Anthias (Anthiinae), or  are small brightly coloured fish belonging to the Grouper Family (Serranidae) in the Perch Order (Perciformes). They are found in large numbers on many coral reefs, and tend to be highly endemic (i.e. species tend to have limited ranges), leading to a large number of different species. The variety, bright colouration and sociable nature of Anthias make them popular in the aquarium trade. All Anthias are born female, and join the harem of a male that controls a section of reef upon reaching maturity. Anthias grow throughout their lives, and when a male dies the largest female in his harem will  change sex, becoming male and taking over the harem.

In a paper published in the journal Zootaxa on 8 May 2013, Jeffrey Williams of the Division of Fishes at the Department of Vertebrate Zoology at the National Museum of Natural History and Erwan Delrieu-Trottin and Serge Plans of the Centre de Recherche Insulaire et Observatoire de l'Environnement at the Université de Perpignan describe two new species of Anthia from the Marquesa Islands in French Polynesia.

The first new species described is placed in the genus Plectranthias and given the specific name flammeus, meaning fiery. Plectranthias flammeus is a 11.5–23.4 mm, white Fish with red, orange and yellow blotches. It was found living on a rock wall with a rubble and sand base near Nuku Hiva Island, towards the northwest end of the Marquesa Island chain.

The second new species is placed in the genus Pseudanthias and given the specific name oumati, a Marquesan word for the Sun, in reference to its brilliant yellow colour. Pseudanthias oumati is a 58 mm bright yellow Fish. It was found living near a sloping reef at a depth of 50-55 m near Fatu Hiva island at the southeastern end of the Marquesa group. 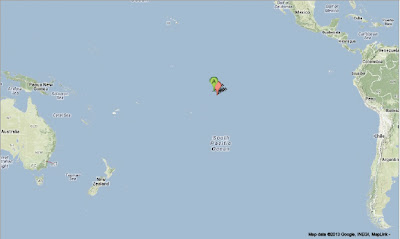