Athabasca River polluted by mine runoff.

Communities along the Athabasca River in west-central Alberta, Canada, have been advised against drawing water from the river five days after the collapse of a wall containing a holding pit that held runoff from the Sherritt International operated Obed Mountain Coal Mine, an open pit mine roughly 30 km to the east of Hinton. Around a billion liters of water contaminated with coal dust, clay and sand were released into two tributaries of the river, on Thursday 31 October 2013. Coal runoff can potentially contain a variety of toxic chemicals, and while tests have not revealed any dangerous compounds in the river, many residents have questioned why they were not informed of the problem immediately, and raised concerns as to how well the Alberta government is policing the mining industry. 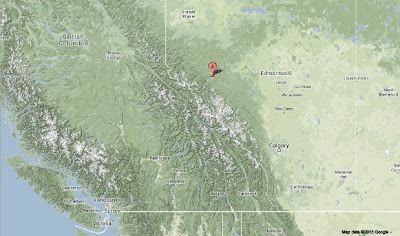 The approximate location of the Obed Mountain Coal Mine. Google Maps.

Sherritt International reopened the Obed Mountain Coal Mine in 2009, having obtained it from previous owners, Luscar, who ran the mine from 1985-2003, when it was closed for economic reasons. At the time there were ambitious proposals to expand the mine, but in 2012 these were scaled back dramatically, apparently due to a drop in the price of coal on international markets, with the majority of the staff being either laid off or transfered to other projects. The mine is currently described by Sherritt as 'economically inactive', with only a skeleton staff employed in maintenance roles. It is unclear what Sherritt's long-term ambitions for the project are.