An American Hyaenodontid in China.

The Hyaenodontidae were a group of carnivorous Mammals the appeared in the the Late Palaeocene and continued till the Late Miocene. Their name means 'Hyena-toothed', though they are not closely related to the Hyenas, or any other extant Mammal group. They were formerly classified with the Oxyaenids in a group called the Creodonts, though that group is now thought to be polyphyletic; i.e. the two groups which formerly were classified together to form the Creodonts are no longer thought to be closely related.

In a paper published in the journal Palaeontology in January 2014, Michael Morlo of the Forschungsinstitut Senckenberg, Katharina Bastl of the Institut für Paläontologie and the Forschungsgruppe Aerobiologie und Polleninformation at Universität Wien, Wu Wenhao of the  Research Center of Palaeontology at Jilin University and Stephan Schaal, also of the Forschungsinstitut Senckenberg, describe a new species of Hyaenodontid from the late middle Eocene Huadian Formation of Jilin Province China.

The new species is placed in the genus Sinopa, and given the specific name jilinia, meaning ‘from Jilin’. The species is described from a right dentary (jawbone) preserved in two fragments, recovered from the Gonglangtou Coal Mine in Jilin Province. 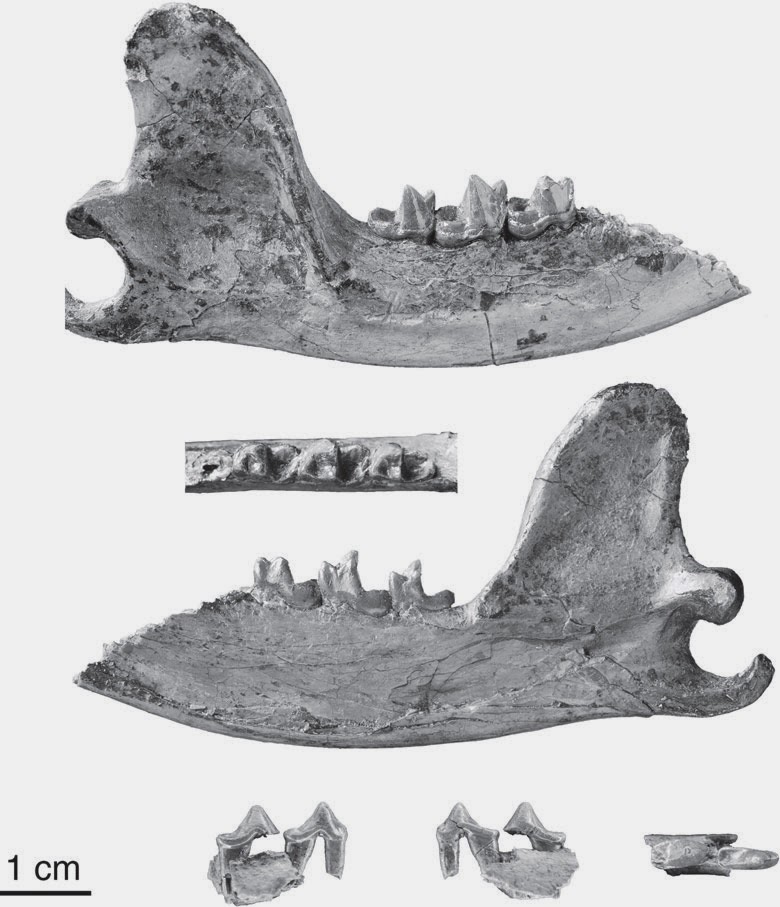 The genus Sinopa has previously been described only from North America; this is its first occurrence in Asia. The presence of Hyenadontids in China is not unexpected; the group is believed to have arisen in Africa, and spread through Eurasia to North America by the early Eocene, however the genus Sinopa is thought to have arisen in North America, after faunal interchange with eastern Asia had largely ceased. The presence of Sinopa jilinia in northeast China adds to a small, but growing, body of evidence that faunal interchange between Asia and North America may have persisted for longer than previously thought.