Two killed in landslide in Azad Jammu and Kashmir.

Two people were killed in a landslide at Lohar Gali near Muzaffarabad in Azad Kashmir on Wednesday 19 March 2014. Dr Mohammed Ashraf Quraishi the Director of the Agriculture Department of Azad Jammu and Kashmir, and his daughter Hina Ashraf Quraishi, a first year medical student at AJK Medical College in Muzaffarabad were traveling from Rawlipindi to Muzaffarabad on the Muzaffarabad-Mansehra Highway when their jeep was buried beneath the landslide. The incident provoked a demonstration in Muzaffarabad against the condition of the road, leading to a confrontation with police in which several people were injured. 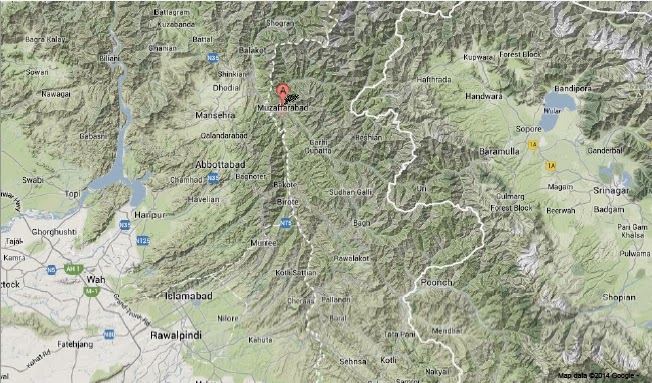 The area around Muzaffarabad is extremely prone to landslides, due to a number of active faults in the area, these being driven by the northward movement of the Indian Plate, which is pushing into Eurasia at a rate of 40 mm a year. This causes earthquakes on both plates, as well as the folding and uplift that has created the Himalayas and the Tibetan Plateau. The situation is made worse in spring, when thawing leads to increased runoff from melting glaciers. Landslides are a common problem after severe weather events, as excess pore water pressure can overcome cohesion in soil and sediments, allowing them to flow like liquids. In 2010 and 2011 the region also saw extensive flooding due to melting glaciers.