Two cars travelling in opposite directions were swallowed by a sinkhole that opened up to the north of Hayden Lake in Kootenai County, Idaho (roughly 40 km northeast of Spokane, Washington), at about 3.00 am local time on Thursday 6 March 2013. Both drivers, Clifton McMahon (24) and Melissa Ehrmantraut (31) were treated at the Kootenai Health and Medical Center for non-life threatening injuries, as was a passenger in one of the vehicles, Anthony Marino (47). 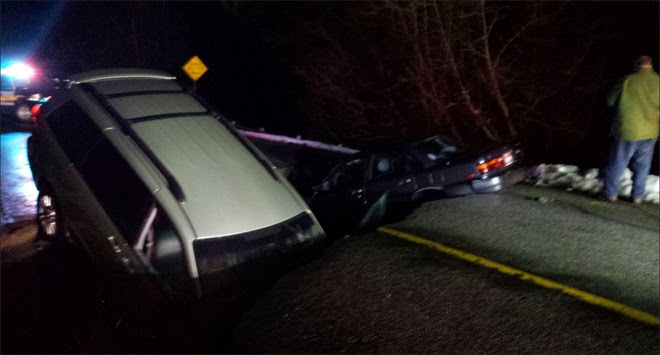 The two vehicles at the site of the 6 March 2013 Hayden Lake sinkhole.﻿ Koontenai County Sheriff's Office..


The Hayden Lake sinkhole is thought to have been caused by a rainwater culvert running beneath the road, which failed due to heavy runoff, leading to water washing away a significant volume of soil beneath the road, and the formation of a 3.0 by 2.5 m sinkhole.   See also Pickup truck swallowed by sinkhole on Big Island, Hawaii, One person rescued after Chicago sinkhole swallows pickup truck,  Homes destroyed by Florida sinkhole, US Marine killed by Missouri Sinkhole and Car swallowed by sinkhole in Indianapolis.   Follow Sciency Thoughts on Facebook.
Posted by Joe Bauwens at 09:54