Bite marks on the bones of Late Cretaceous Juvenile Ornithischian Dinosaurs from Utah.

Most Mesozoic Vertebrates are known only from skeletal material, which at first sight would seem to make it hard to make detailed studies of the ecology and behavioural interactions of the living animals. Feeding traces on preserved bones are one way to study the behaviour and diets of extinct animals, though in order to do this it is necessary to be able to make an accurate assessment of which animal has made the marks.

The Kaiparowits Formation has been dated to between 76.1 and 74.0 million years old using argon isotope dating. The sequence was laid down by a lowland river system in a subhumid climate. The bones in the study are thought to have come from at least three individuals, though the skeletons were completely disarticulated, and found in the freeze/thaw zone of a crevasse-splay deposit. The bone bed was 20 m bellow a bentonite (volcanic ashfall) layer dated to 75.02 million years old by isotope dating, indicating that the bones must be older than this.

Three distinct types of predator capable of tackling small Dinosaurs are likely to have been present in Late Cretaceous riverine ecosystems; Theropod Dinosaurs, Crocodyliforms and Mammals, each of which would be expected to make distinctive marks on bones, due to their different dentition. Theropod Dinosaurs had flattened, blade shaped teeth that were often serrated and left distinctive striations on bones (though the absence of such marks cannot in itself be taken as evidence against a Theropod Dinosaur as the trace-maker), Crocodyliforms have rounded or oval cone-shaped teeth, typically used to crush bones in powerful jaws, and Mammals have heterodont dentition (i.e. their teeth are not all the same shape), typically leaving distinctive bite-marks.

The bite-marks on the Kaiparowits Dinosaur bones lack the typical striations of Theropod predation, and do not show any sign of the trace-maker having had heterodont dentition. More tellingly one of the marks retains a fragment of tooth from the trace-maker, and this is blunted and oval on profile, similar to the tooth of a Crocodyliform but unlike that of a Theropod. The canine teeth of predatory Mammals often have a similar profile to those of Crocodyliforms, though Mammals (unlike Dinosaurs and Crocodyliforms) are not capable of replacing lost or damaged teeth throughout their lives, and therefore typically adopt  feeding strategies which avoid damage to teeth, making it more likely that the tracemaker was a Crocodyliform.

Crocodyliforms are known to have reached far larger sizes during the Mesozoic than they do today, and it is generally accepted that all but the very largest Dinosaurs are likely to have been at risk of predation from these animals. Most studies of potential Crocodyliform predation on Dinosaurs have concentrated on these larger species, but the Kaiparowits traces appear to have been made by a far smaller animal, suggesting that either smaller species of Crocodyliform were targeting Dinosaur prey (or carrion), or sub-adult specimens of these larger species were doing so. The Kaiparowits Formation has produced a diverse Crocodyliform fauna, with a variety of both large and small species which could potentially have been the trace-makers. 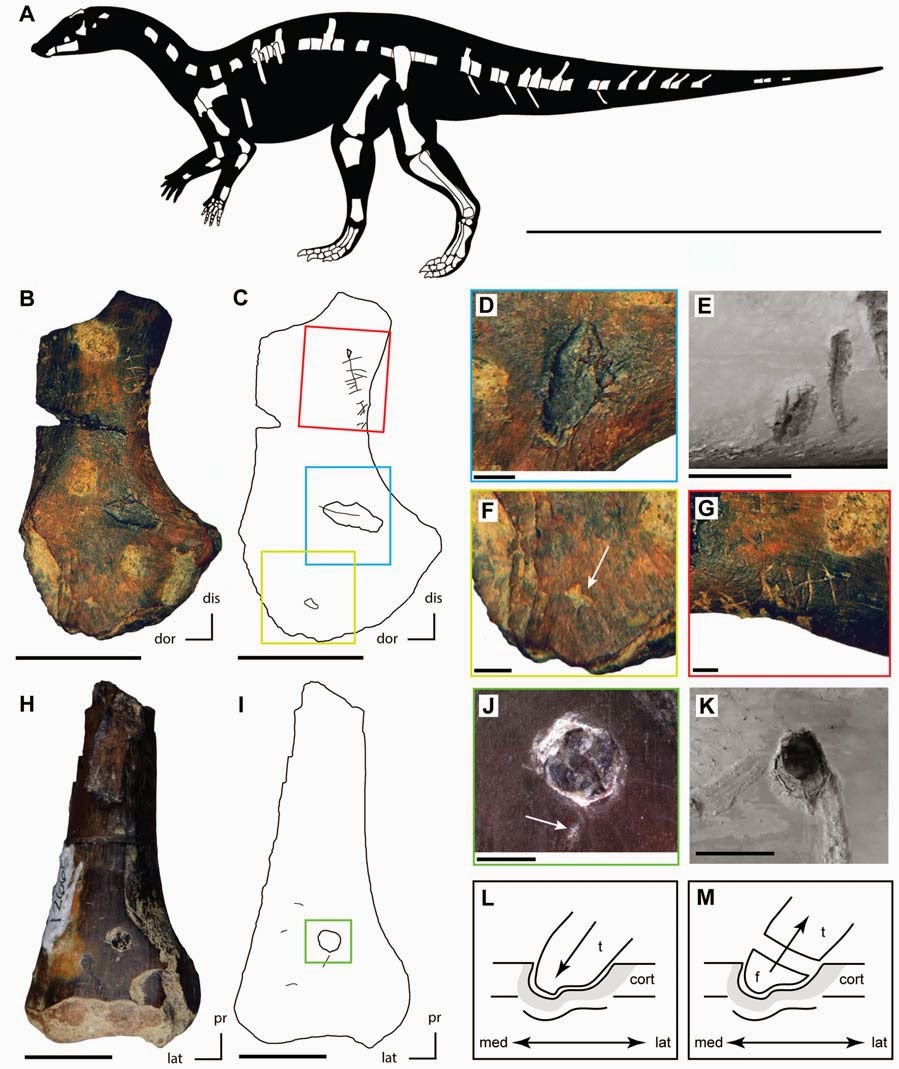 Feeding traces on juvenile Dinosaur bones (Kaiparowits Formation) compared to those derived via actualistic experiments. (A) Skeletal reconstruction of the undescribed Ornithischian Dinosaur from the Kaiparowits Formation with known material shown in white. (B) Partial left scapula with feeding traces. (C) Outline drawing of left scapula with feeding traces highlighted and coloured boxes showing the locations of figure parts (D), (F), and (G) (colours match the respective figure parts). (D) Bisected pit on the left scapula. (E) Bisected pit on a modern cow femur produced by Alligator mississippiensis during actualistic experiments. (F) Small pit (highlighted by white arrow) on the proximal portion of the left scapula.(G) Series of small scores present along the ventral margin of the neck of the left scapula.(H) Distal portion of a right femur with feeding traces. (I) Outline of right femur with feeding traces highlighted and coloured box showing the location of figure part (J). (J) Puncture containing an embedded tooth present on the right femur and a small pit (highlighted by white arrow) just ventral to the puncture. (K) Puncture present on a modern cow femur produced by Alligator mississippiensis during actualistic experiments.(L) Reconstruction of the hypothesized impact of the Crocodyliform tooth with the right femur, creating the puncture observed in the specimen. (M) Reconstruction of the hypothesized fracturing of the damaged Crocodyliform tooth crown, resulting in the embedded tooth observed in the specimen. Scale bar equals one meter in  (A); 10 mm in (B), (E), (H), and (K); 2 mm in (D), (F), (G), and (J). Abbreviations: cort, cortical bone; dis, distal; dor, dorsal; f, tooth fragment; lat, lateral; med, medial; pr, proximal; t, tooth crown. Boyd et al. (2013).


See also A giant Metriorhynchid Crocodylomorph from the Middle Jurassic of England, Predation of Freshwater Mussels in the Early Cretaceous of Spain, A Thalattosuchian Crocodiliforme from the Late Cretaceous of Argentina and Identifying Triassic footprints.