A 7000-year-old copper awl from the Jordan Valley of Israel.

The production of copper goods in the Middle East is thought to date from around 4500-3800 BC, when the Ghassulian culture of the Jordan Valley began producing a variety of copper and gold prestige items (jewelry etc.). The peoples of the Middle East adopted the technology relatively late; it was known in parts of southern Europe and the Indian Subcontinent before 7000 BC. 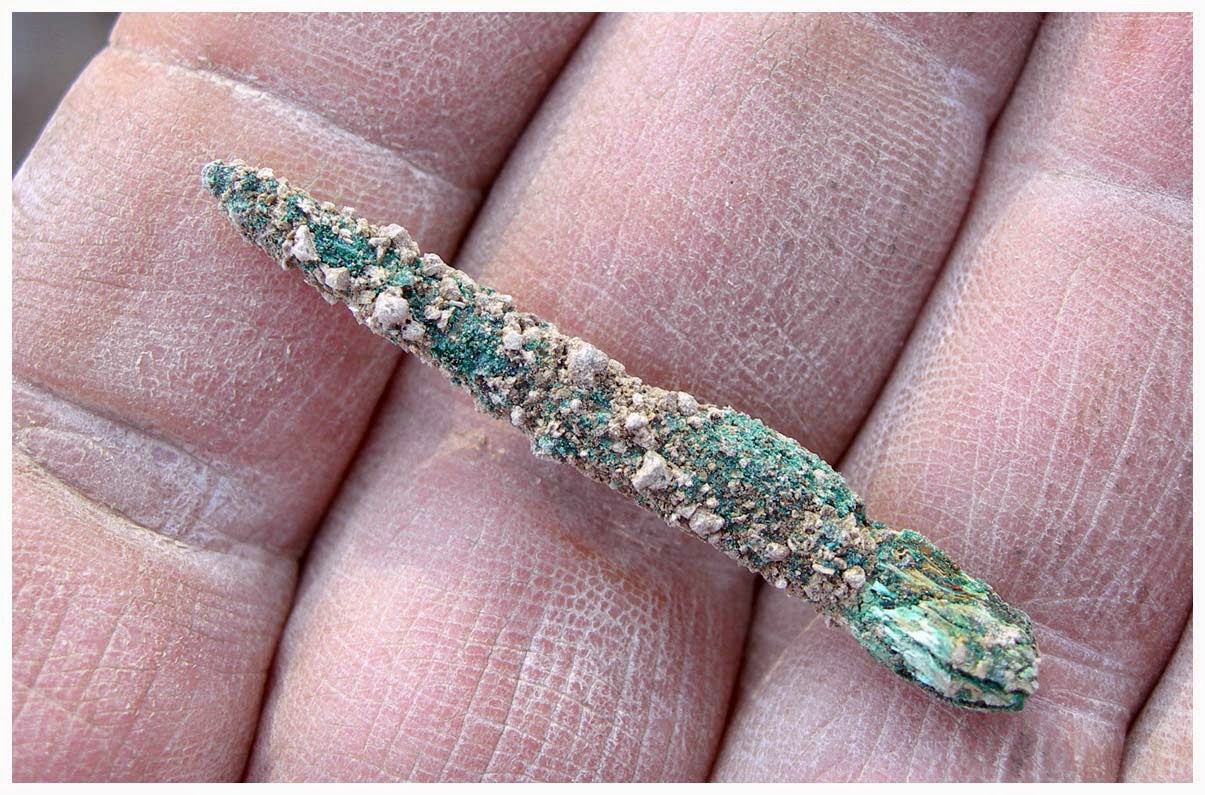 The Tel Tsaf site is a complex of mud brick buildings thought to have been occupied from roughly 5100-4600 BC. The site comprises a number of linked courtyards with a mixture of round and rectangular buildings, plus cooking hearths, grain silos and burial sites. The grain silos had storage capacities of an estimated 15-30 tons, far more than was likely to have been consumed by the local population, implying the production of a considerable surplus. The site has produced a large number of pottery items, Ostrich-shell beads and obsidian tools. Many of these items were not of local origin, including pottery from Syria and/or Mesopotania, obsidian from Armenia or Anatolia, and shells from Egypt, indicating that the site was part of an extensive trade network. 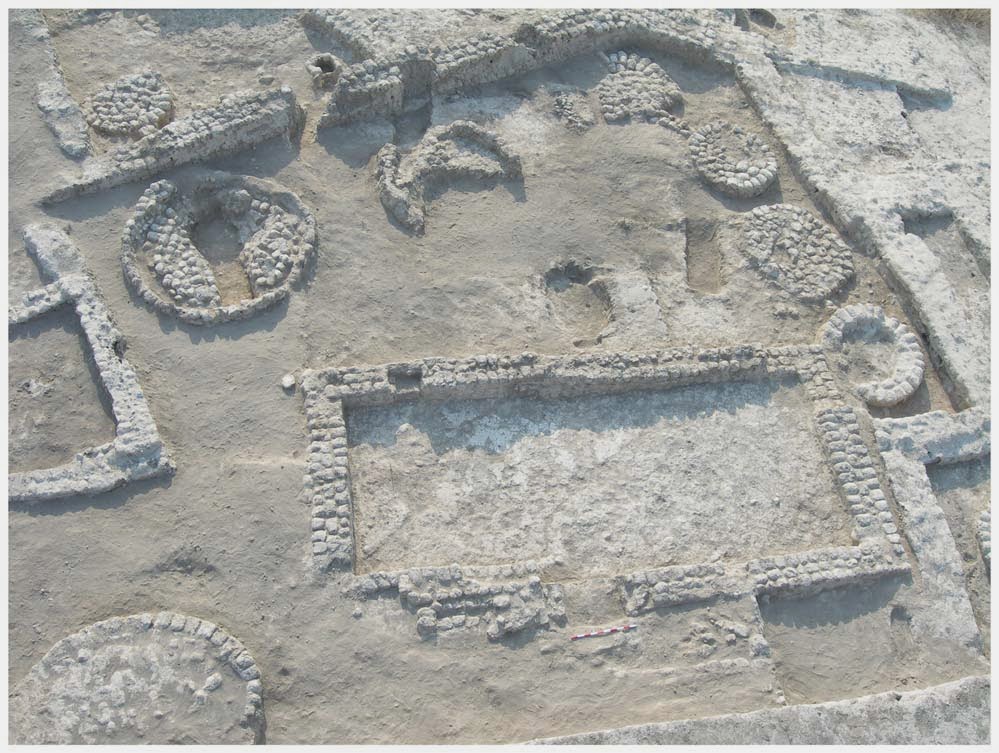 General view of Courtyard Building 1 at Tel Tsaf. The silo in which the burial was found is located in the upper left corner. Garfinkel et al. (2014).

The awl was found within a burial chamber, located within a silo at the northeast corner of a courtyard at Tel Tsef, one of four such burial chambers excavated at the site. The grave belonged to a woman of about 40, orientated north-south, with her head to the south turned to her right (i.e. facing east). 1668 Ostrich-shell beads were found in the grave, arranged in six rows on the pelvis. 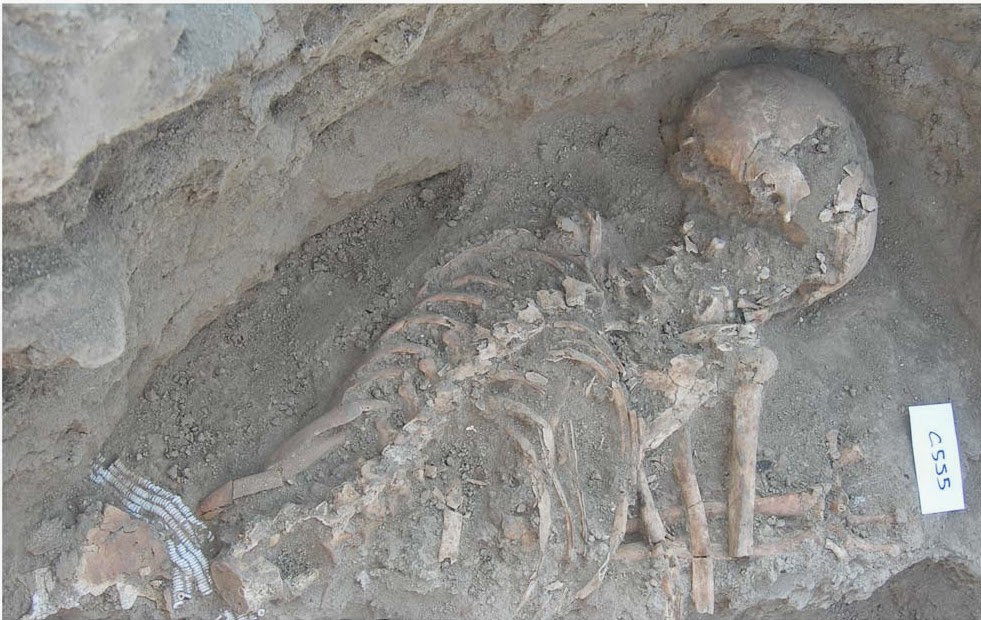 The awl was badly corroded, making estimates of the original manufacturing process and metallurgy difficult. However the metal appears to be about 6% tin, plus 0.8% arsenic, with trace amounts of lead and iron, quite different to any source of copper in the vicinity. This suggests that the awl probably reached the area as a trade item, rather than being manufactured locally, and Garfinkel et al. tentatively suggest that the high tin content may indicate that it comes from the Caucasus region. Despite the lack of local manufacture, the awl does represent an important stage in the development of copper technologies in the region, as it indicates that the people area were already trading with people who could manufacture copper items in the centuries before they began to do so themselves. 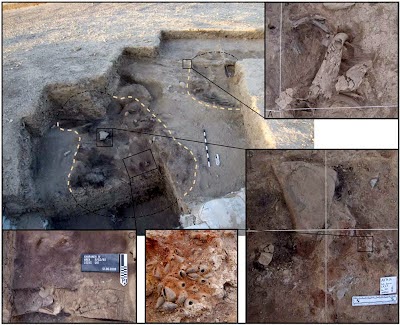 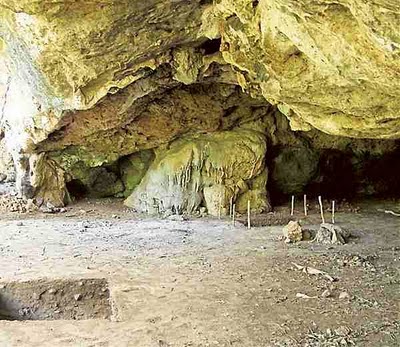 Fishermen targeting tuna in East Timor at least 42 000 years ago.