Fossil Thrips from the Early Eocene of France.

Thrips (the term is both singular and plural) are tiny (usually less than 1 mm) Insects related to Lice and True Bugs. They have wings, but are poor flyers, and feed by sucking fluids from plant or animal hosts. Thrips do not undergo metamorphosis, the young are essentially smaller, non-reproducing versions of the adults. Due to their small size and ubiquitous nature, it is probable that Thrips are one of the larger Insect groups, though they are relatively understudied, with little work carried out on Thrips that do not have agricultural significance.

In a paper published in the journal Acta Palaeontologica Polonica on 19 December 2011, Patricia Nel of the Muséum national d'Histoire naturelle in Paris and AgroParisTech, Alexander Schmidt of the Courant Research Centre Geobiology at Georg−August−Universität Göttingen, Claus Bässler of the Nationalparkverwaltung Bayerischer Wald and André Nel, also of the Muséum national d'Histoire naturelle describe a new species of Thrips from Oise Amber, which originates from the early Eocene of the Paris Basin (about 53 million years old, close to the Paleocene–Eocene Thermal Maximum).

The new species is placed in the genus Uzelothrips, and given the species name eocenicus, meaning from the Eocene. The genus Uzelothrips has to date contained only a single species, the extant Uzelothrips scabrosus, which has been recorded from Brazil, Singapore, Australia and Angola. Uzelothrips eocenicus is almost identical to the modern species, differing only in the antennae, on which segments III and IV are fused in the modern species but separate in the Eocene one. The species is described from two specimens, one female and one of uncertain sex. 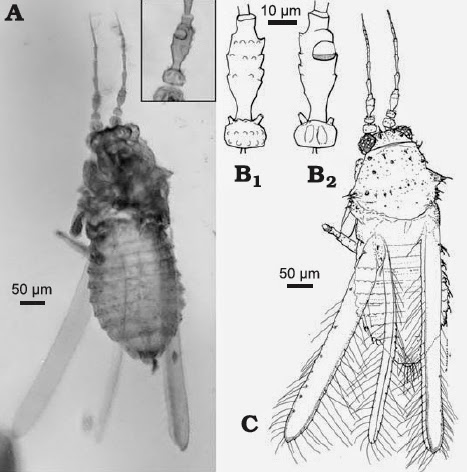 Nel et al. also found a number of fungal fragments attached to one of the specimens. These are thought to be from a Sooty Mould, a type of fungus that primarily gains nutrients from the excreta of Aphids, Scale Insects etc. These have not previously been documented from Thrips, but examination of photographic records of Uzelothrips scabrosus showed that several specimens were in fact carrying similar Fungi. 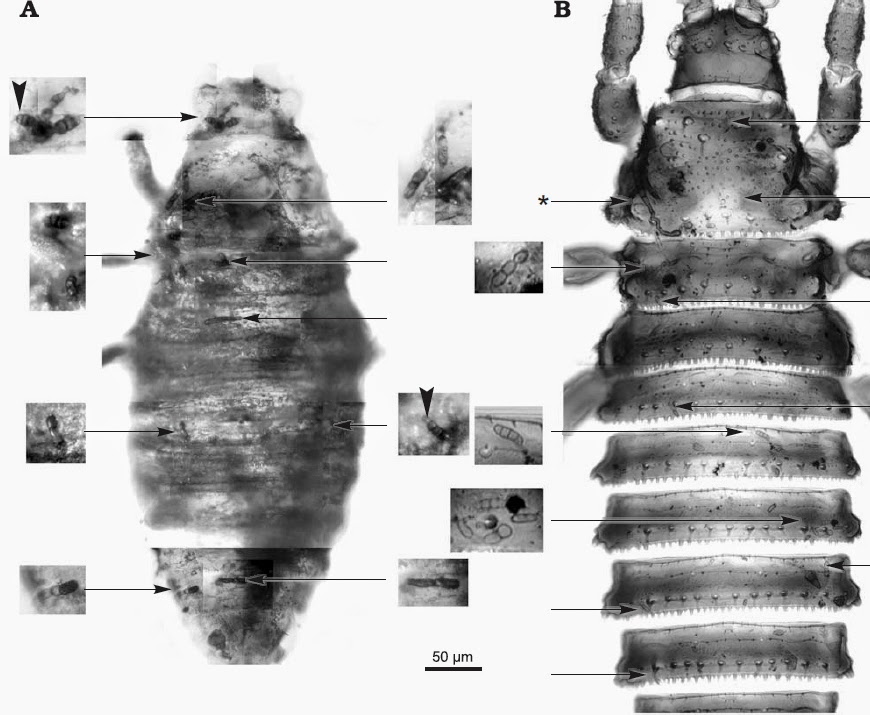 Ascomycetes found attached to the cuticle of the fossil and extant Uzelothripid Insects. The small panels show higher magnification images of some fossil and extant fungi found at the locations indicated by the arrows. (A) Fossil apterous specimen of Uzelothrips eocenicus. The image is composed of photographs obtained from those optical sections which show the attached fungi most clearly. The arrowhead in the uppermost left panel indicates a Capnosporium−like conidium; the arrowhead in the middle right panel indicates a tapering hypha tip with dividing stage. (B) Recent specimen of Uzelothrips scabrosus. The asterisk refers to the elongated hypha that has possibly grown on the surface of the thrips after attachment. Nel et al. (2011). 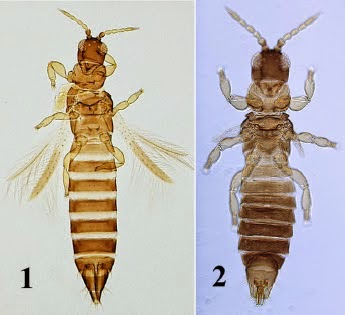 Three new species of Thrips from Japan, Malaysia and Australia.

A new species of Thrips from Chiapas State, Mexico.