DinosauriformArchosaurs and Theropod Dinosaurs from the Late Triassic of southwest Poland.

Dinosaurs emerged during the last 30 million years of the Triassic Period, and quickly rose to dominate terrestrial ecosystems, being the largest, most diverse and most abundant group of terrestrial vertebrates during the Jurassic and Cretaceous. However the earliest Dinosaurs and their relationship to other Archosaurs are not well understood, as the group has a poor Triassic fossil record, being known only from a few sites in western North America, central and southern South America and Germany.

In a paper published in the journal Palaeontology on 16 April 2014, Grzegorz Niedźwiedzki of the Subdepartment of Evolution and Development at UppsalaUniversity, Stephen Brusatte of the School of GeoSciences at the University of Edinburgh, Tomasz Sulej of the Institute of Paleobiology and Richard Butler of the School of Geography, Earth and Environmental Sciences at the University ofBirmingham describe a series of specimens of Dinosauriform Archosaurs (Archosaurs closely related to Dinosaurs, but not actually classified as such) and Theropod Dinosaurs from the Zbązszynek Beds at Poręzba in southwest Poland.

The Poręzba locality has produced a large assemblage of terrestrial and marine vertebrate fossils, as well as marine invertebrates and trace fossils, coprolites and plant macrofossils, pollen and spores. The vertebrate assemblage is dominated by Turtles, with Hybodontid Sharks, Actinopterygid Fish, Temnospondyl Amphibians and Archosaurs also present. Most of the bone fossils are fragmentary and rounded, being found in conglomerate layers, which almost certainly implies they were reworked, though some well-preserved isolated bones have been found in mudstone layers.

The first specimen reported is a proximal fragment (fragment from the end closest to the torso) of the left femur of a Silesaurid Dinosauromorph Archosaur. This specimen preserves the femoral head and part of the shaft of the bone. The head is separated from the shaft by a notch, the head is triangular in proximal view (i.e. looked at from the position of the joint that connected it to the body), the groove traversing the proximal surface of the bone is straight, and the bone has distinct anterior and dorsolateral trochanters (expand) which are not connected by a shelf; all of which indicate Silesaurid affinities for the bone.

The second specimen reported is a partial right scapulocoracoid of a Herrerasaurid, a group previously thought to lie outside the Dinosauria, but now thought to be early members of the group of uncertain affinities, possibly within the Theropoda or the Saurischia. The scapulocoracoid is formed of a fused scapula and coracoid without a visible suture, a feature seen in Herrerasaurids, some early Neotheropods (Ceratosaurs plus Tetanurans) and some non-Dinosaurian Dinosauromorphs, but not in early non-Neotheropod Theropods, basal Sauropodomorphs (unless Herrerasaurids are basal Sauropodomorphs) most early Ornithischians and most nonavian Tetanuran Theropods. The fusion in this specimen is very strong, making it impossible to see how much of each bone is present.

The acromion region of the scapula extends dorsally at nearly 90˚ to the blade of the scapula, a feature found in Herrerasaurids and some early Sauropodomorphs and Theropods, but different from the condition in most Dinosaurs, where this angle tends to be very obtuse (i.e. much larger than 90˚). The dorsal margin of the scapula is concave, though this is seen in a wide variety of Archosaurs, including most early Dinosaur groups. The bone has a thick, elongate ridge in the centre of its medial surface, a feature seen in other Herrerasaurids; a less prominent ridge has also been reported in some early Theropods, but possibly also in some Sauropodomorphs. 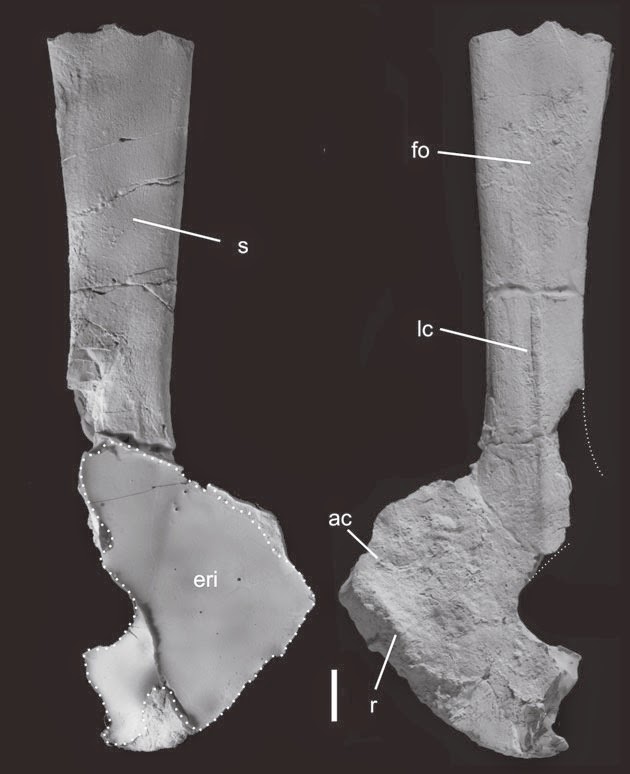 The third specimen reported is a proximal fragment of the femur of a Herrerasaurid, with the tip of the femur head missing and the bone extending to the centre of the fourth trochanter. The head is offset from the shaft, a feature typical of Dinosaurs. A dorsolateral trochanter is present on the lateral surface of the femur head, a feature seen in most Dinosauromorphs (Dinosaurs and Dinosauriform Archosaurs), this trochanter being flat with a low ridge at its anterior margin, a feature seen in Herrerasaurids and some early Theropods and Sauropodomorphs, but not in non-Dinosaurian Dinosauromorphs or early Ornithischians. There is a faint ligament sulcus on the underside of the femoral head, which has been recorded in some other early Dinosaurs. A spike-like trochanter is present on the anterior surface of the proximal end of the specimen, which is typical of Dinosaurs. However this trochanter lacks the distinctive dorsal process seen in most Theropods, as does that of other Herrerasaurids. The specimen also has a crescent-shaped trochanteric shelf on the anterolateral edge of the proximal femur, a feature recorded previously in the Herrerasaurid Chindesaurus, from the Late Triassic of North America, but otherwise not known in any other Dinosaur or close Dinosaur relative. The fourth trochanter forms a prominent flange-like ridge, typical of Dinosaurs but distinct from the mound-like fourth trochanter of Non-dinosaurian Dinosauromorphs and Crocodile-line Archosaurs (i.e. Archosaurs more closely related to Crocodiles than to Birds). 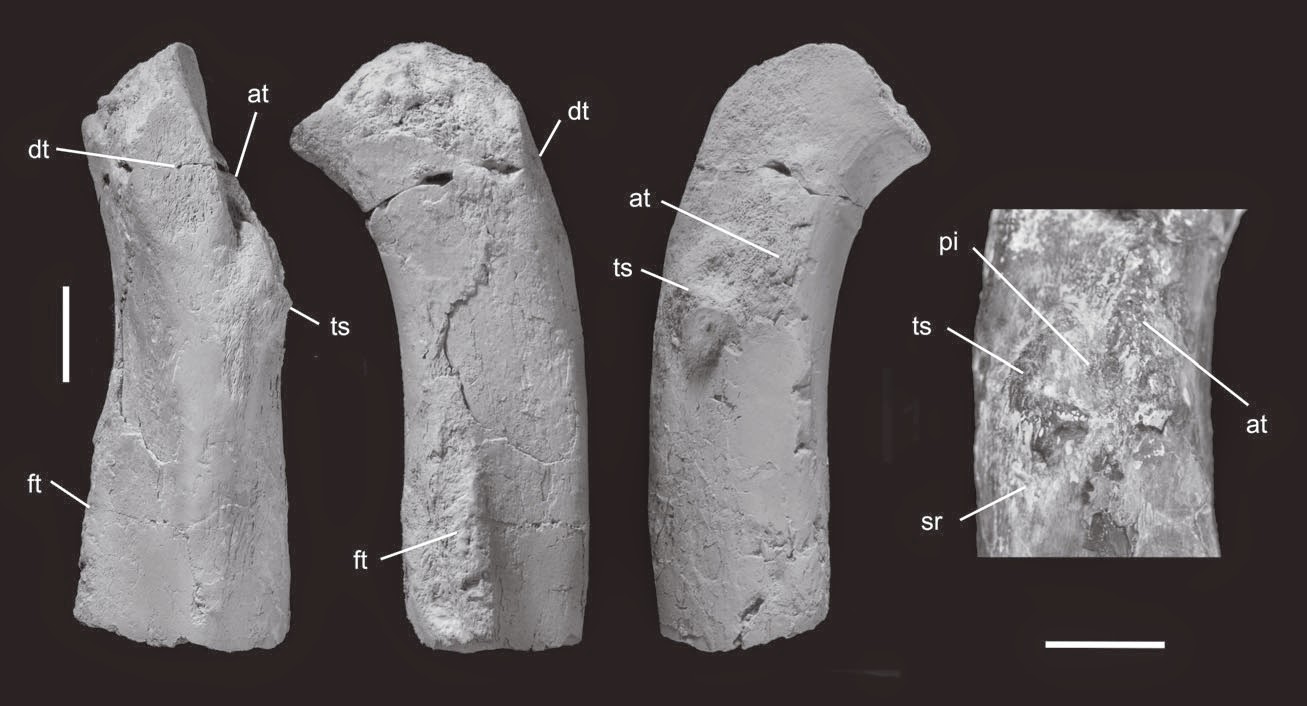 The fourth specimen reported is a proximal portion of the left fibula of a Herrerasaurid. This is transversely compressed, with a shallow depression for the joint with the fibular condyle of the tibia. The proximal end of the bone tapers to a point in proximal view, a feature seen in all Avian-line Archosaurs (i.e. Archsaurs more closely related to Birds than to Crocodiles). The medial surface is shallowly concave, typical of early Dinosaurs, but lacks the deep fossa seen in more derived Theropods. There is a distinct notch on the anterior edge of the bone, a feature seen in other Herrerasaurids, but not in other Dinosaurs or close Dinosaur relatives.

The fifth specimen recorded is an articulated left pelvis of an indeterminate Theropod. This has an open acetabulum (gap), which is the usual state in Dinosaurs, though this is partially closed in some early members of the group. The ilium, pubis and ischium are fused into one bone, but with the sutures visible as convex bulges. This is common in early Neotheropods and seen in some Herrerasaurids, but otherwise very unusual in Archosaurs. The supraacetabularcrest of the ilium is clearly separated from the postacetabular process, a common state in many non-Dinosaurian Dinosauromorphs, and early Dinosaurs of several groups, including Saurischians, Theropods, Herrerasaurids, Sauropodomophs and Ornithischians; however these features are fused in some early Neotheropods and in most Ceratosaurs. The specimen has a concave notch on the posterior margin of the ischial peduncle of the ilium, a feature seen in some other early Theropods, but absent in non-Dinosaurian Dinosauromorphs, Herrerasaurids, Sauropodomorphs, Ornithischians and most derived Neotheropodssuch as Allosauroids and Coelurosaurs. The suture between the ischium and the ilium extends horizontally at the same level as the suture between the ilium and the pubis, a condition seen in some early Theropods and other early Dinosaurs, but absent from more derived TetanuranTheropods. The ventral margin of the acetabulum of the specimen is largely formed from the ischium, forming a finger-like elongate process. This is also seen in various Coelophysoids and some Tetanurans, but is absent in Herrerasaurids and early Sauropodomorphs and close Dinosaur outgroups. It is present in some early Ornithischians, but the structure is quite distinct.

The final specimen recorded is the distal end of a right tibia, thought to be from a Neotheropod Dinosaur. This has a distinct oblique ridge on its anterior surfacewith a lateral malleolus, which probably contacted the fibula of the living animal during articulation, which is seen in other Dinosaurs and close Dinosaur relatives, but not Crocodile-line Archosaurs. A large posterolateral process projecting laterally is present, something seen in Neotheropods but not in other early Saurischian Dinosaurs. The posterior margin of the tibia is divided into two surfaces divided by a distinct ridge, which is the case in most Dinosaurs but not close Dinosaur relatives or Herrerasaurids. The posterolateral surface is distinctly concave, as is seen in Neotheropods, Sauropodomorphs and Ornithischians but not in non-Dinosaurian Dinosauromorphs or Herrerasaurids. 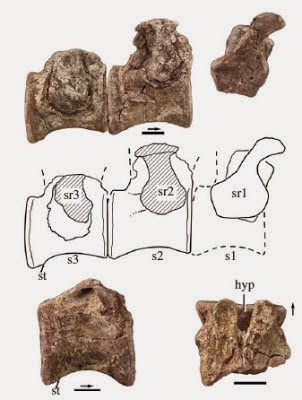 A predatory Archosaur from the Late Triassic of southern Poland.
Archosaurs are the group of Vertebrates that include...