Electric Knifefish, Hypopomidae, are small freshwater fish found in still and slow moving waterways in South America. They are members of the Order Gymnotiformes, which also includes the Electric Eel, Electrophorus electricus, and like it are capable of generating electrical pulses within their bodies, but unlike the Eel are not capable of producing a pulse of sufficient intensity to be used for capturing prey or defending against predators, though they are able to use it for sening and exploring their environment, and communicating with other members of the same species.

In a paper published in the journal ZooKeys on 28 August 2013, John Sullivan of the Cornell University Museum of Vertebrates, Jansen Zuanon of the InstitutoNacional de Pesquisas da Amazônia, and Cristina Cox Fernandes, also of the Instituto Nacional de Pesquisas da Amazônia and of the Biology Department at the Universityof Massachusetts, describe two new species of Electric Knifefish from the Amazon river system.

Both the new species are placed in the genus Brachyhypopomus, which is distinguished by having notably shorted snouts than other members of the Family Hypopomidae, but whereas other members of the genus, and indeed family, are toothless, the two new species were found to have small, needle-like teeth on their premaxillae (the bone that forms the front part of the upper jaw). For this reason Sulivan et al. erect a new subgenus, Odontohypopomus (‘Tootherd Knifefish’), in which both the new species are placed.

The first new species is named Brachyhypopomus (Odontohypopomus) walteri, in honour of Walter Heiligenberg (1938–1994) of the Scripps Institute of Oceanography, for his work on the neurophysiology and behaviour of electric Fish. The species was found in ‘floating meadow’ ecosystems along the Amazon and Solimões River systems, from the Río Napo drainagealong edge of Lago Anangucocha in Ecuador to the mouth of the Amazon River. 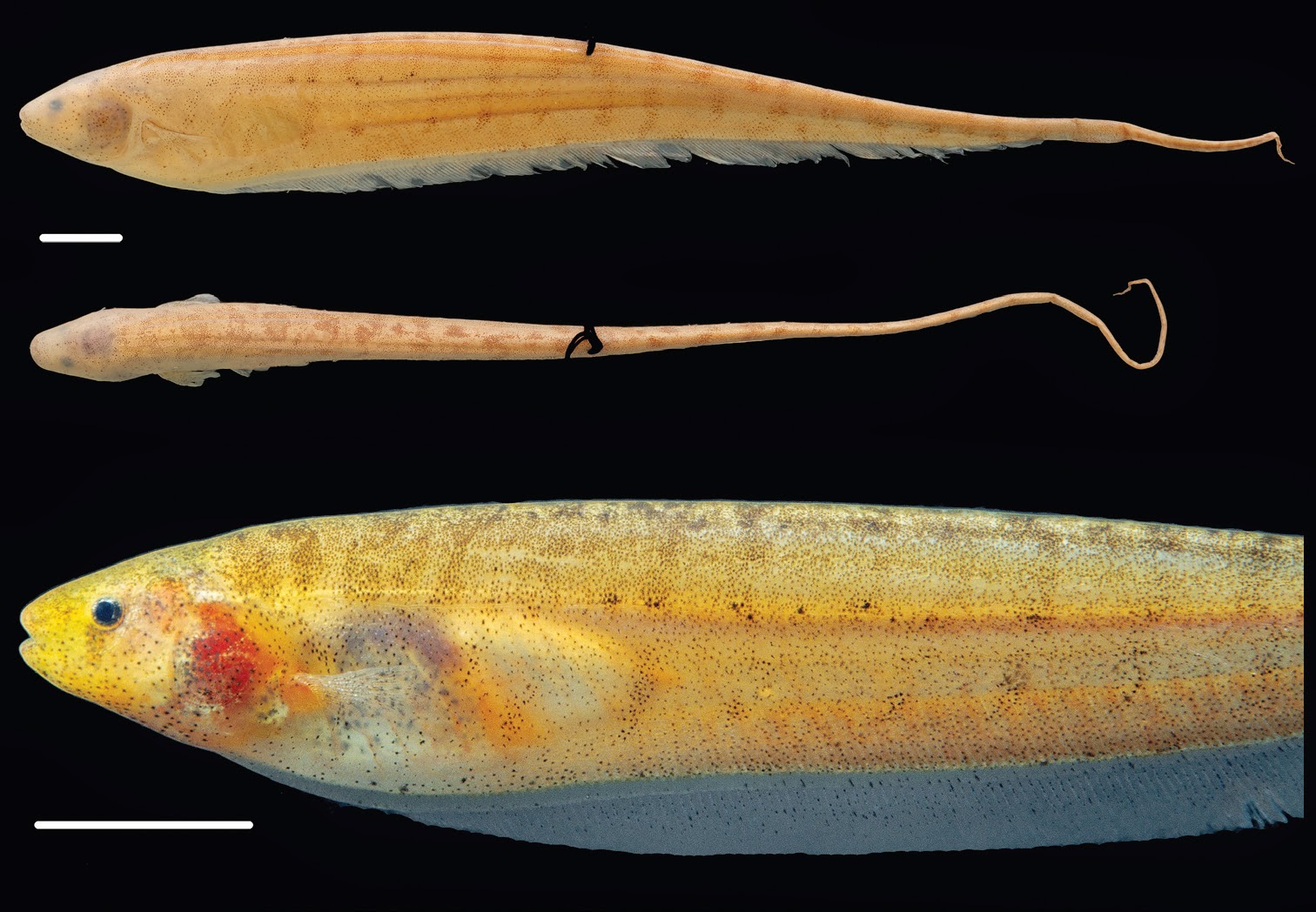 Adult specimens of Brachyhypopomus (Odontohypopomus) walteri examined range from 116 mm to 175 mm in length. They are yellow in colour and semi-transparent, with their gills appearing cherry red through the body wall, while the gut is dark and the swim bladder light. Many specimens had banding on their sides, which varied in both darkness and extent; in some specimens this was restricted to the dorsal side, in others the banding was also present on the underside, although narrower.

The second new species is named Brachyhypopomus (Odontohypopomus) bennetti, in honour of Michael Bennett of the Albert Einstein College of Medicine at Yeshiva University, for his work on electric fish neurophysiology. This species was also found in ‘floating meadow’ ecosystems, from Colombia, Ecuador and Peru in the west to the mouth of the Amazon in the east. 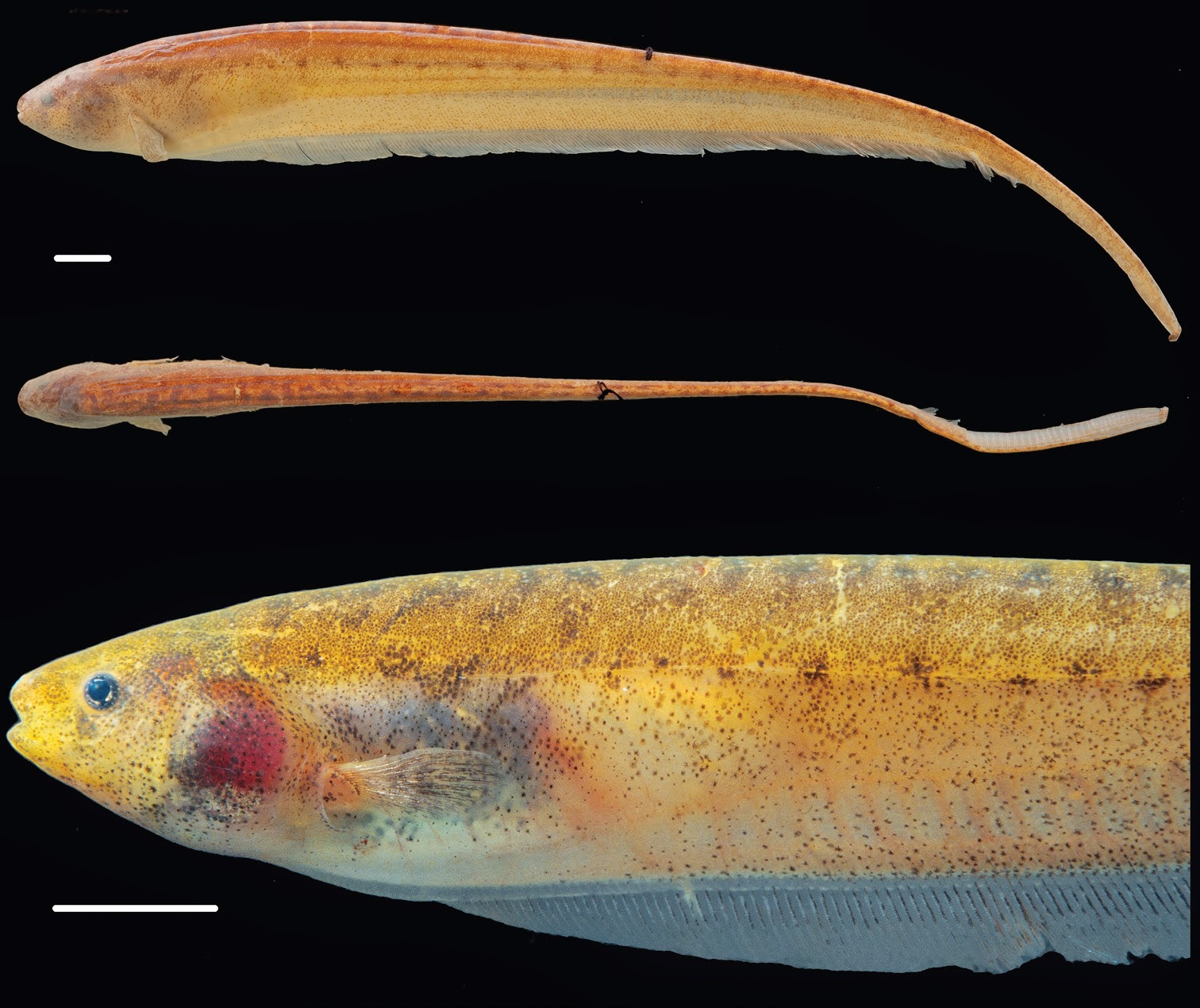 Adult specimens of this species examined ranged from 98 mm to 215 mm in length. They were yellowish tan in colour, but not transparent, with similar banding to Brachyhypopomus (Odontohypopomus) walteri. 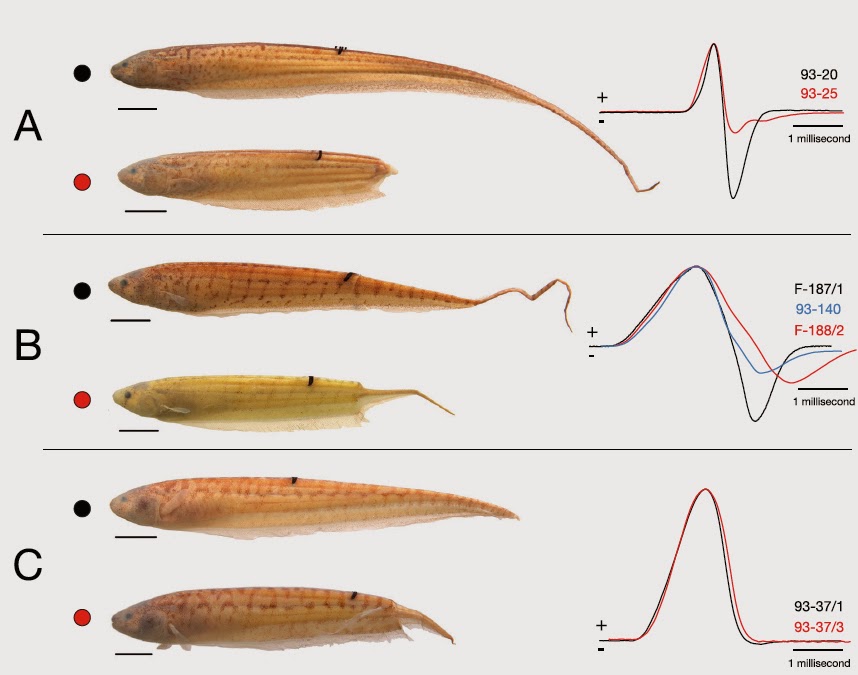 It has previously been speculated that variations in the electrical emissions of Gymnotiforme Fish may reflect variations in water conductivity, but the two species of Odontohypopomus live alongside one-another, so this seems unlikely to be the case in this instance. A monophasic pulse has only been recorded in two other species of Gymnotiformes, one of which is the Electric Eel, Electrophorus electricus, which occurs in the same floating meadows as the two Odontohypopomus species, and which is predatory in nature. Sullivan et al. suggest that Brachyhypopomus (Odontohypopomus) bennetti may be able to use its monophasic pulse to fool Electric Eels, or other predators which avoid dangerous Electric Eels but consume Knifefish. 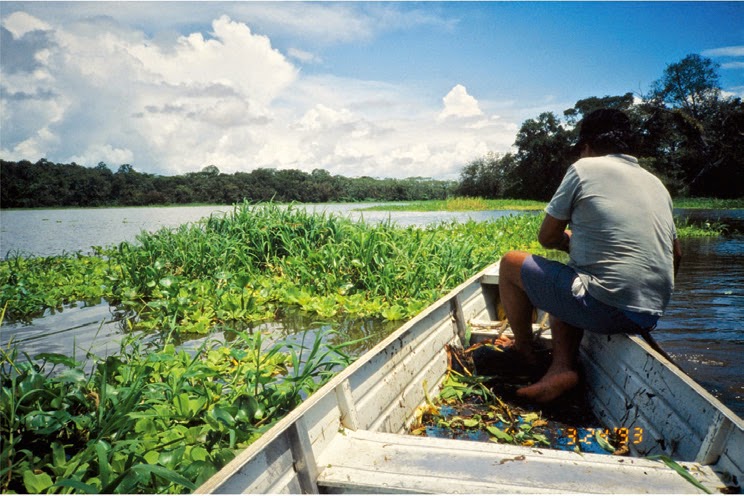 However Sullivan et al. also note that Knifefish frequently lose their tails due to predation and that this causes their electrical pulses, in particular the second, negative, phase of their pulses, to become much weaker. They also not that the electrical pulses of  Brachyhypopomus (Odontohypopomus) bennettiis not affected by the lose of its tail, and suggest that the monophasic pulse might be an adaptation that lets the Knifefish endure such attacks with less loss of electrical pulse function. 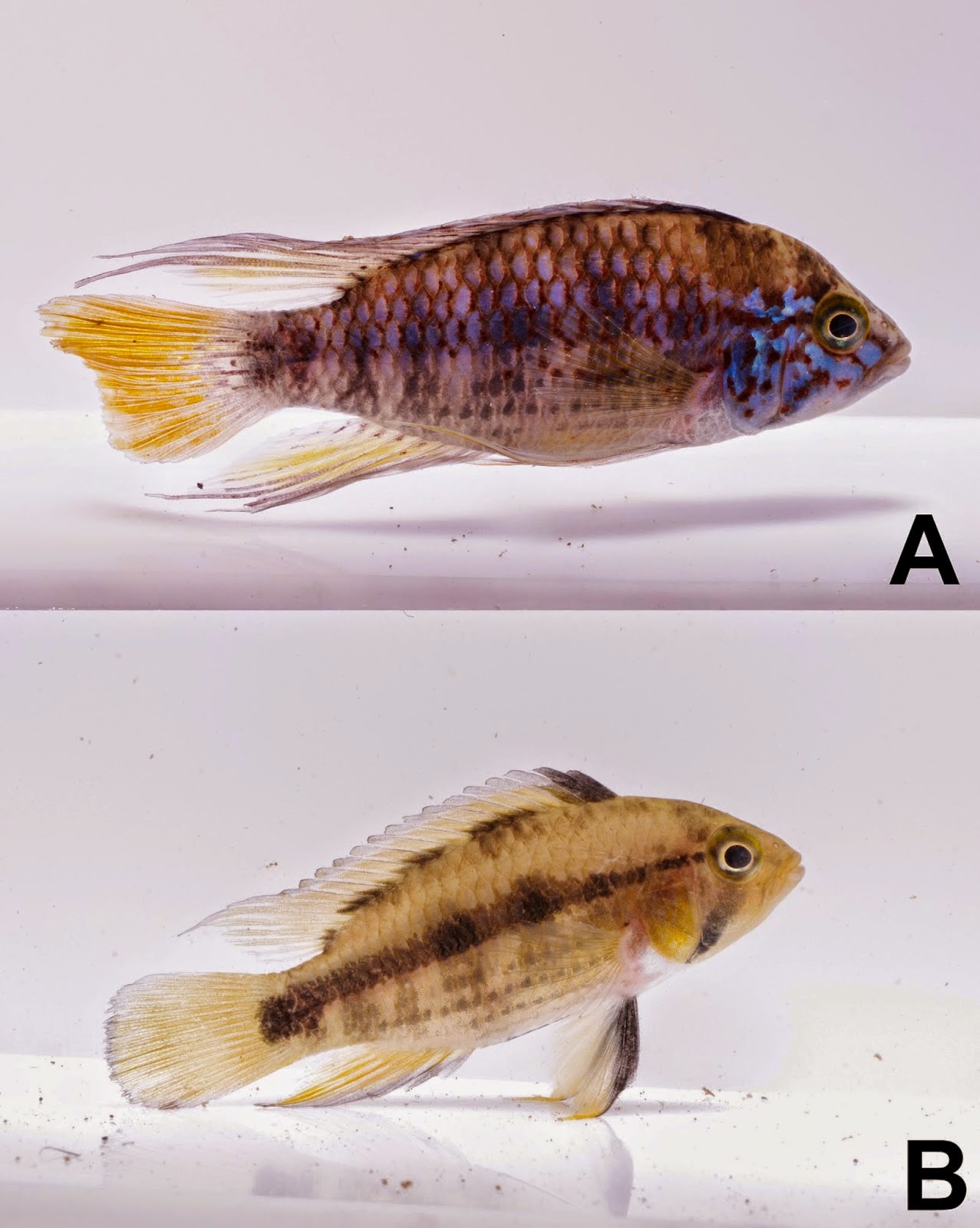 A new species of Cichlid Fish from the Amazon Basin in Peru.
Cichlid Fish of the genus Apistogramma are found in waterways across tropical South America. There are currently 84 known species, of which 18 are found in the Peruvian Amazon Basin. They are small Fish, never exceeding 60 mm in length, the males growing larger than the females and typically being more brightly coloured. 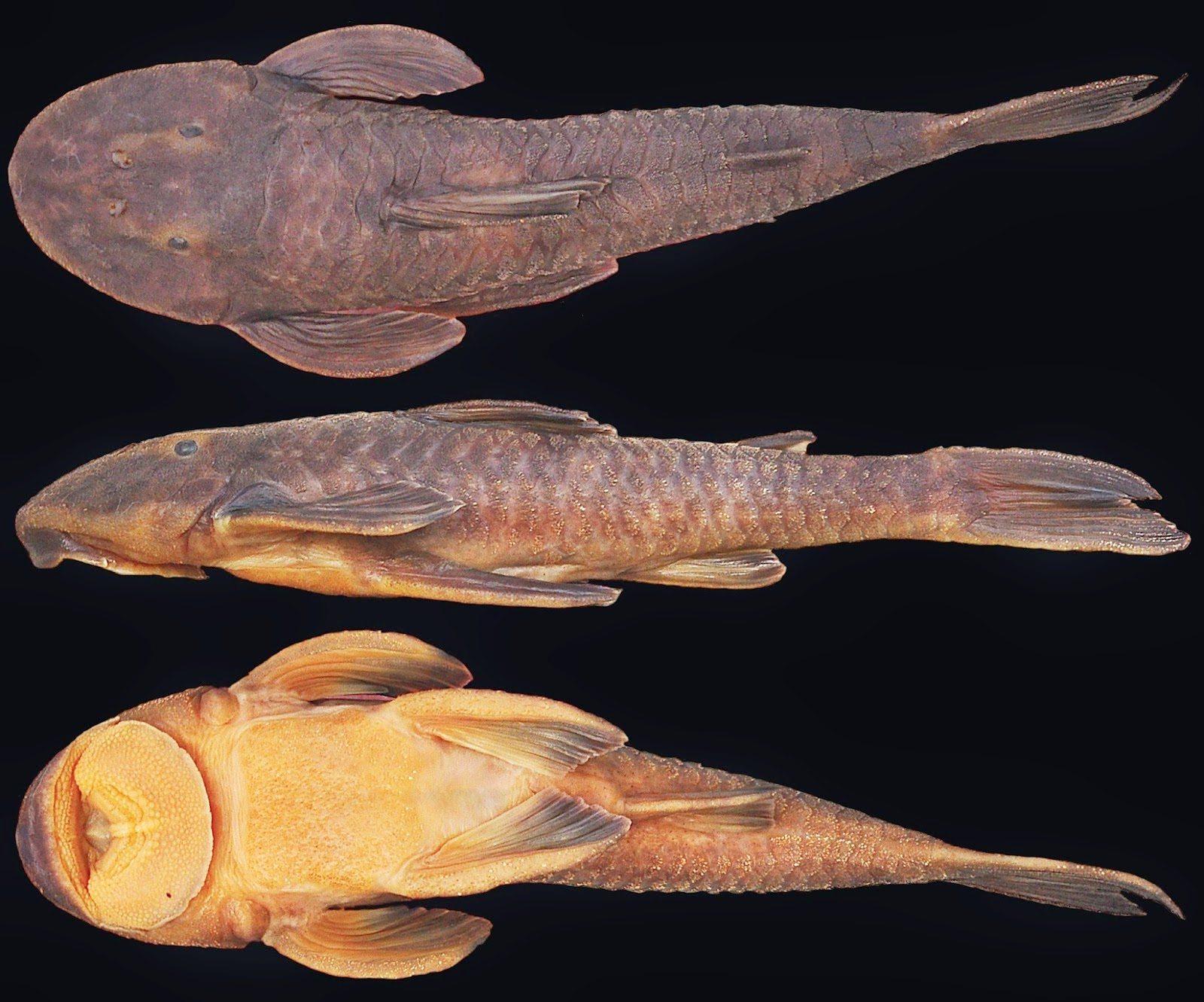 A new species of Armoured Catfish from the Rio Doce Basin in Minas Gerais State, Brazil.
Armoured Catfish (Loricariidae) are distinctive Catfish (Siluriformes) with bodies covered in bony armoured plates found only in South America. They are a diverse group, with a high number of species, many of which have very limited distributions, and several new... 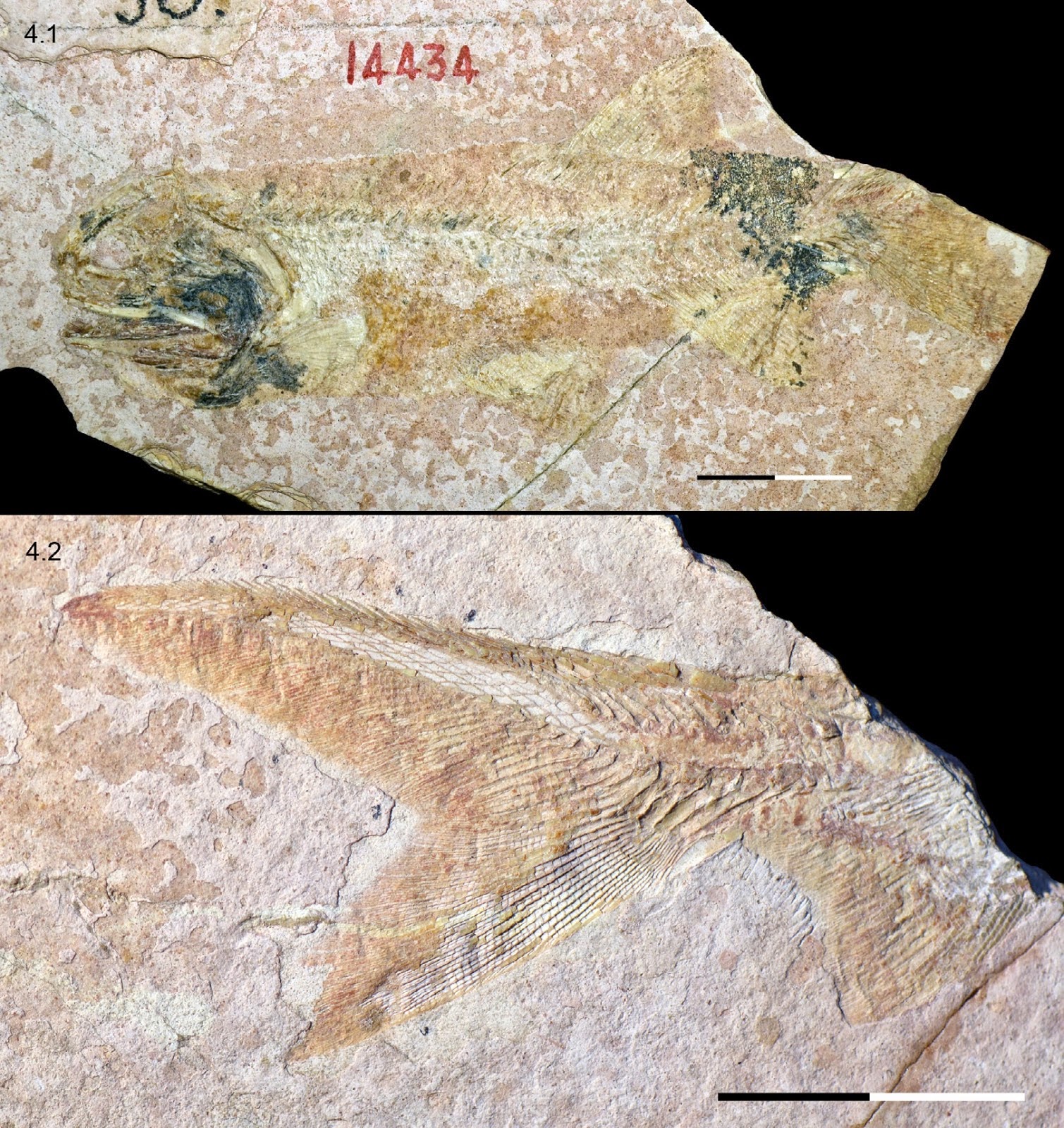