Quill Mites, Syringophilidae, are highly specialized Mites, Acari, that live within the quills of the feathers of Birds, feeding on fluids from the feather folicles. This is harmful to the plumage of the host, and many Quill Mites are considered to be pests in comercial and domestic Bird-keeping. For a long time the classification of Quill Mites has been based upon morphology, though this has been problematic as Mite living inside feathers have little room for morphological variation, but the advent of genetic taxonomy has led to a far better understanding of relationships within the group.

The new species is placed in the genus Aulonastus, and given the specific name similis, which is derived from Myiozetetes similis, the formal name of the Social Flycatcher, the Bird on which it was first discovered. The species is essentially similar in morphology to the previously described Aulonastus euphagus, though some of the hairs differ in length and the specis canbe separated by genetic analysis. The species was found in two species of Passarine (Song) Birds, the Social Flycatcher and the Red-throated Ant-Tanager, Habia fuscicaudai. 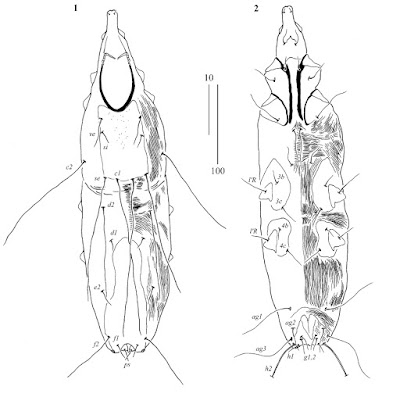 Laelaspis natanziensis: A new species of Laelapid Mite from Isfahan Province, Iran. Laelapid Mites are a large and diverse group, including free-living carnivorous forms as well as both obligate and facultative parasites (species that feed...