Could there have been life on ancient Venus?

The discovery of extensive sedimentary structures on Mars has led to considerable speculation about the possibility of ancient oceans and even life on that planet, despite considerable doubts about the possibility of a planet as small as Mars ever being able to retain a dense enough atmosphere to maintain a climate stable over long periods of time, and models of Solar evolution that suggest all the planets in the Solar System are likely to have received far less heat from the Sun billions of years ago than is the case today. However there is another rocky planet in the Solar System which is closer in size to Earth and therefore able to retain a denser atmosphere, and which, being closer to the Sun would be less negatively effected by lower Solar radiation emissions in the past. Venus today is covered by a thick and inhospitable atmosphere, the result of a runaway greenhouse effect, but a past Venus with a cooler climate could potentially have hosted extensive liquid water and potentially even life.

Modern Venus has a far denser atmosphere than the Earth, with more than twice as much nitrogen and many times as much carbon dioxide, a powerful greenhouse gas that contributes to the searing temperatures on the surface of the planet. However there is no reason to believe that the planet has always had an atmosphere as dense at this.

Venus also rotates extremely slowly and in a retrograde direction (i.e. the planet spins in the opposite direction to its orbit and the other planets of the Solar System), completing one rotation every 243 Earth Days; longer than the 225 Earth day Venusian year. This leads to a Venusian day (i.e. the time a point on the surface of Venus takes to complete one rotation relative to the Sun) of 116 Earth days. It has long been thought that this slow rotation speed has been brought about by breaking caused by atmospheric tides, suggesting that a younger Venus with a less dense atmosphere may have had a longer rotation period. However recent models have suggested that even an atmospheric density similar to that of Earth would have had a considerable breaking effect on Venus.

The nature of the topography of ancient Venus is unknown; the entire surface if the planet having been reworked by a period of intense vulcanism hundreds of millions (but not billions) of years ago. The surface of the planet is divided into areas of highlands and lowlands that superficially resemble the continents and ocean basins of Earth, however the surface of Venus is much flatter than Earth and an ocean of equivalent volume to that of the Earth's would lead to only 10% of the surface of Venus being exposed above the sea.

Way et al. constructed four models of the climate of ancient Venus, each starting with a Nitrogen atmosphere as dense as the (nitrogen plus oxygen) atmosphere of Earth today, plus carbon dioxide and methane levels equivalent to that of the modern Earth, and an ocean averaging 310 m in depth across the planet (i.e. some areas much deeper but some exposed). None of the models started out with any ice caps at the poles or on mountains, but these were allowed to evolve.

The first model was given a topography similar to that of modern Venus and was assumed to be receiving levels of Solar radiation equivalent to those predicted for Venus 2.9 billion years ago (about 40% higher than that recieved by Earth today), plus a rotation rate equivalent to that of modern Venus. This resulted in the surface of the planet evolving an average surface temperature of 11°C, with temperatures ranging from -22°C to 36°C. This is a much narrower range of temperatures than experienced on modern Earth, largely due to an absence of polar ice packs and more efficient heat distribution in the atmosphere of the slowly rotating planet. 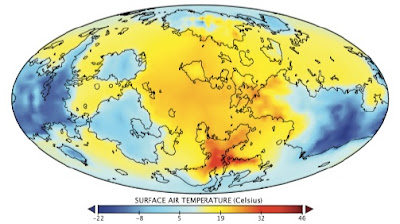 Surface temperature time average (over 1/6th of a Venusian solar day) of the surface air temperature (SAT) for the paleo-Venus world with modern day rotation rate and a solar spectrum estimated for 2.9Gya. Way et al. (2016).

This world developed a thick cloud cover on its Sunward side, at times approaching 100% cloud cover. Updraught in the tropics led to the formation of a shield of cirrus anvil clouds similar to that seen on the Intertropical Convergence Zone on Earth, but much more persistent, due to the slower rotation of Venus. The model planet was able to radiate considerable heat into space from its night side, unlike modern Venus where a thick carbon dioxide atmosphere creates a runaway greenhouse effect, leading to sufficient cooling on the night side of the planet for snowfall to occur. Most of this snow would be expected to disappear as the surface moves back into daylight, but a permanent ice-cap evolved on the highlands of the Ishtar Terra (which is located close to the northern pole), with permanent snow as deep as 5 m being found above in areas above 5000 m. 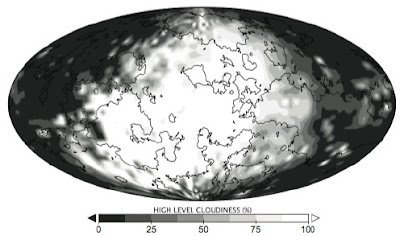 Very high levels of rainfall were observed in the Venusian tropics, with rainfall levels always exceeding 8 mm/day within 20° of the equator, and in places reaching tens of mm/day, wetter than anything seen on Earth. This led to a prediction of very high levels of erosion and potential development of sedimentary structures in the tropical highland areas of Aphrodite Terra and Beta Regio, deposits that could potentially be detected by future missions to Venus, even space-based missions reliant on remote sensing. 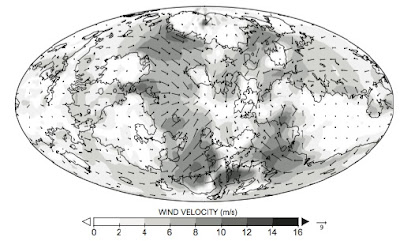 The second model also adopted the topography and rotation rate of modern Venus, but was given levels of Solar radiation equivalent to that expected to have been received by Venus about 715 million years ago (equivalent to the Early Cryogenian on Earth, around the time when the first simple animals were beginning to appear); about 70% higher than that received by the Earth today and only 6% lower than that received by Venus today. This world developed an average surface temperature of 15°C, with surface temperatures ranging from -17°C to 35°C; slightly warmer than the previous model, but with less difference between the extremes and still quite hospitable by modern Earth standards. 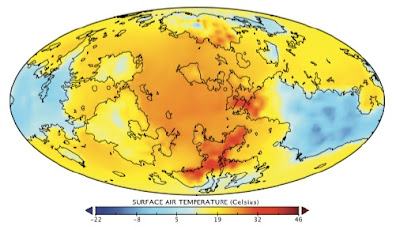 Surface temperature time average (over 1/6th of a Venusian solar day) of the surface air temperature (SAT) for the paleo-Venus world with modern day rotation rate and a solar spectrum estimated for 0.715 Gya. Way et al. (2016).

This model also developed an significant ice cap on Ishtar Terra, and a wet climate likely to lead to the evolution of high erosion and the development of sedimentary structures in Aphrodite Terra and Beta Regio.

The third simulation retained the solar radiation for Venus 2.9 billion years ago and the rotation rate of modern Venus, but was given an Earth-like topography. This model evolved an average surface temperature of 23°C and a range of surface temperatures from -13°C to 46°C, considerably warmer than either of the previous models. 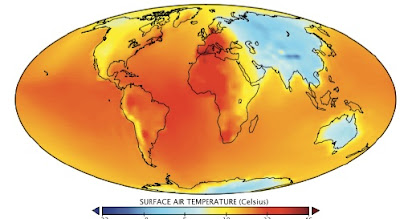 Surface temperature time average (over 1/6th of a Venusian solar day) of the surface air temperature (SAT) for the paleo-Venus world with modern day rotation rate and a solar spectrum estimated for 2.9Gya, but using a modern day Earth topography. Way et al. (2016).

This planet has considerably more water present in the tropics, leading to a higher rate of evaporation, and a significant water vapour driven greenhouse effect (though not as high as the carbon dioxide driven greenhouse effect on modern Venus). Nevertheless this planet is still cool enough for snow to fall and settle on its night side, though in this case all of the snow would be expected to be lost again as the surface moves back into sunlight.

The final simulation retained to topography of modern Venus and Solar radiation levels expected on the planet 2.9 billion years ago, but sped up the rotation of the planet till a Venusian day was only 16 times as long as an Earth day. This led to a considerably warmer planet with an average surface temperature of 56°C, and temperatures ranging from 27°C to 84°C in the surface. 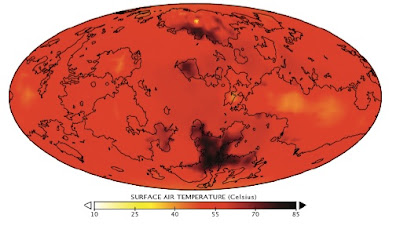 Surface temperature time average (over 1/68h of a Venusian solar day) of the surface air temperature (SAT) for the paleo-Venus world witha 2.9Gya solar spectrum but contrary to the other 3 simulations has a sidereal day 16 times that of modern Earth. Way et al. (2016).

This world develops a considerable greenhouse effect as the factor rotation period prevents significant cooling on the night-side of the planet, leading to lower air circulation (less wind). Consequently snowfall does not occur in this model, and the greenhouse effect begins to reach the level at which water could potentially be lost from the atmosphere into space, leading to a permanent drying of the climate. 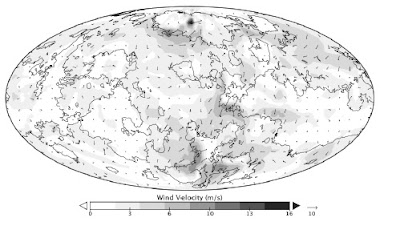 Surface level winds for the paleo-Venus world witha 2.9Gya solar spectrum but contrary to the other 3 simulations has a sidereal day 16 times that of modern Earth. Way et al. (2016).

All of this is, of course, highly speculative, as we have little idea about the geology of, or water levels present on, early Venus. Modern Venus is known to have no equivalent of the plate tectonics seen on Earth, but ancient Venus could potentially have had something similar, or a quite different tectonic system that we have not thought of. Similarly the planet may have always been dry, or may have previously had far more water than the Earth and lost it due to the planet's runaway greenhouse effect.

Nevertheless these simulations provide an interesting insight into the possible evolution of our solar System, and provide us with some insight into where to look on Venus for information about the planet's past. They are also informative in relation to our search for Earth-like world's in other stellar systems, in that Venus is considerably inside the inner limit of what is considered the habitable zone of our Solar System (i.e. the zone in which an Earth-like planet might be expected to have liquid on the surface, and which might consequently be considered to potentially support life), and yet these simulations have shown that under a range of conditions Venus could have maintained a mild climate and extensive oceans, simply because of its low rotation rate.

The possibility of an Earth-mass planet in the habitable zone of the Kepler-68 system.      The Kepler Space Telescope has located many multi-planet systems since its inception, which combined with discoveries made by other planet-hunting...

Reconstructing cloud cover for ancient Earth, with a view to spotting a new one.             Four the past four billion years or so the continents have ambled back and forth across the face of...
Follow Sciency Thoughts on Facebook.