Cratera viridimaculata: A new species of Land Flatworm from the Argentinian Atlantic Forest.

Land Flatworms, Geoplanidae, are carnivorous free-living Platyhelminth Worms found in terrestrial habitats. Like other Platyhelminths they have a very simple bodyplan, lacking an internal body cavity which holds the organs or any form of circulatory system or reproductive organs. They have flattened bodies, which allows oxygen absorbed through the skin to reach all the cells, with a simple gut with a single opening that serves as both the mouth and anus. Most Land Flatworms are extremely limited in their environmental tolerances, and consequently have very limited geographical ranges, but a few species have proved to be much more tolerant and have become highly invasive pest species.

In a paper published in the journal ZooKeys on 11 August 2016, Lisandro Negrete and Francisco Brusa of the Universidad Nacional de La Plata describe a new species of Land Flatworm from the Argentinian Atlantic Forest of Misiones Province, Argentina.

The new species is placed in the genus Cratera, which has previously only been described from the Brazilian Atlantic Forest (the Argentinian Atlantic Forest is a southern continuation of this forest, but in the cooler climate is semi-deciduous rather than an evergreen tropical forest) and given the specific name viridimaculata, meaning 'green with dots'; the worms are an olive green in colour, with grey speckles. These worms are large, exceeding 50 mm in length, and were found at two sites, in the Esmeralda Provincial Park and San Antonio Strict Nature Reserve, both within Misiones Province. 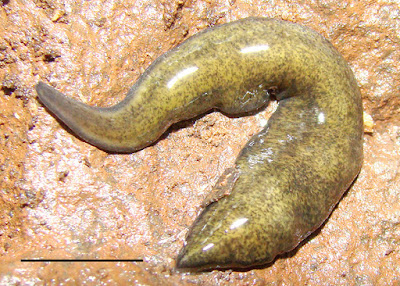 Flatworms (Platyhelminths) are among the simplest animals, and generally considered to be one of...

Blue Flatworms invade Menorca.                 Land Planarians of the family Geoplanidae (Flatworms) are simple animals; they have a rudimentary nervous system, lack a through gut (so that they must regurgitate any waste products), and have no respiratory organs (they absorb oxygen through their moist, non-watertight skins, but cannot actively collect...
Follow Sciency Thoughts on Facebook.