Cinnamomum bladenense: A new species of Cinnamon from southern Belize.

Cinnamons, Cinnamomum spp., are tropical trees in the Laurel Family, Lauraceae, best known for their aromatic bark, which is widely used to flavour food. There are currently about 350 known species of Cinnamon tree, most of which are found in tropical Asia, though 47 species have been described from the tropical forests of Central and South America.

In a paper published in the journal PhytoKeys on 7 June 2017, Steven Brewer of the Belize Foundation for Research and Environmental Education, and Gail Stott of the Department of Plant Sciences at the University of Oxford, describe a new species of Cinnamon from the Bladen Nature Reserve in southern Belize.

The new species is named Cinnamomum bladenense, where ‘bladenense’ means ‘from Bladen’ in reference to the Bladen Nature Reserve (this reserve in turn takes its name from the Bladen River, though the ultimate derivation of the name is unknown). It is a tall canopy tree (unusual for a Cinnamon) reaching 25 m in height, with flowers unusually small for the genus. It has a straight, round, trunk supported by buttress roots, the bark is grey with a pinkish cast, which when damaged reveals a pinkish brown under-layer with a strong soapy odour, reminiscent of a bathroom cleaner. The leaves are waxy, 35-86 mm in length and 11-31 mm wide, flowers are brown-to-black, roughly 5 mm in length and born on leaf axils 40-80 mm in length and covered in grey hairs. 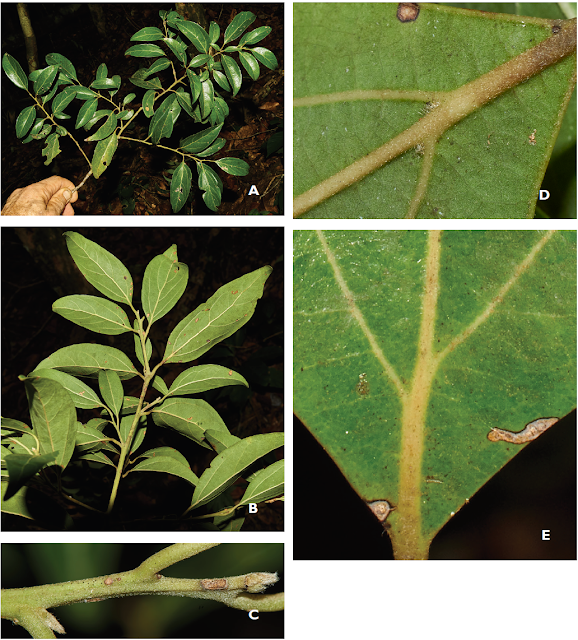 The species is described from less than ten trees found growing on a pair of limestone ridges (an unusual location for a Cinnamon) south of the Bladen River. These locations are slightly upstream of the stretch where the river descends onto the coastal plain, and are on steep, well drained slopes in semi-evergreen forest. No further trees were found in the Bladen Nature Reserve, but similar environments are known to the southwest, close to the border with Guatemala, and to the northeast along the foothills of the Maya Mountains, as far as the southeastern portion of the Cockscomb Basin. For this reason the conservation status of Cinnamomum bladenense is unknown, though Brewer and Stott note that while the Bladen Nature Reserve is theoretically protected, it is prone to illegal logging and burning.