Eight people have been confirmed dead and it is feared that as many as twenty more may be buried after a landslide swept two buses from a road into a gorge at Kotrupi in Mandi District, Himachal Pradesh, at about 20 minutes past midnight on Saturday 12 August 2017. The incident happened close to the Mandi-Pathanckot Highway, at a rest stop where passengers could acquire food and drink, when a landslide swept away both buses, several nearby houses, and the section of road they were standing on. The buses were swept about 800 m into the gorge, with one being completely buried. Five people have been pulled from the wreckage alive, and taken to a hospital in Mandi. The driver and conductor of one of the buses are said to be among the known casualties. 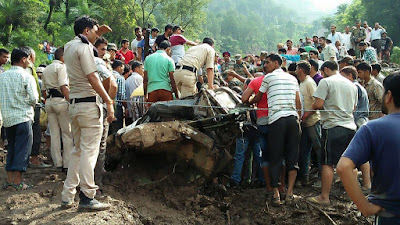 Rescue workers and local villagers search for survivors at the scene of the 12 August 2017 Kotrupi Landslide. AFP.

The incident happened after heavy rains associated with the Indian Summer Monsoon. Mountainous areas of Himachal Pradesh (which is most of the state) are notoriously prone to landslides, particularly during the monsoon season, which lasts from July to September, when very high rainfall levels can trigger many such events. Landslides are a common problem after severe weather, as excess pore water pressure can overcome cohesion in soil and sediments, allowing them to flow like liquids. Approximately 90% of all landslides are caused by heavy rainfall. 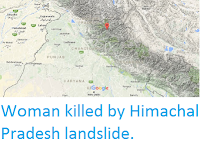 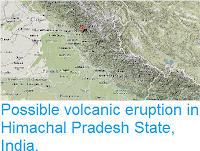