Giraffes, Giraffa camelopardalis, are iconic African Mammals associated with rich savanna grasslands. Because of their highly distinctive morphology and specific environmental requirements, these animals have the potential to serve as good environmental indicators in the fossil record. Unfortunately, dead animals exposed in the open in savanna environments are unlikely to enter the fossil record, as skeletons are rapidly destroyed by a combination of scavenging and weathering, with almost all fossils found in these environments coming from rock shelters, enclosed spaces where Humans, Hyenas or other predators took prey animals to prevent them being stolen. However the large size of Giraffes means that few predators will attempt to tackle them, generally only Human populations with advanced hunting technologies, and that even when killed these animals are almost impossible to transport to a rock shelter for safe consumption.

The footprints are preserved in a detached block of aeolian sandstone (i.e. sands that were laid down by the action of the wind rather than water) roughly 3.9 by 7.9 m, which is estimated to be between 133 100 and 114 500 years old, and probably between 126 000 and 121 000 years old. A total of twelve tracks are preserved, with the best preserved tracks being found at the southern end of the block. The block is located in the uppermost part of the tidal zone, making it vulnerable to erosion both by wave action, and by Nodilittorina africana knysnaensis, a coastal Gastropod found in the area which burrows into soft rocks. The slab is believed to have become exposed at some time since 2011, when the area was last surveyed, and is in danger of sliding further into the sea, or being damaged irreparably by the action of the sea and Gastropods. However it is two large to be removed from the location where it is currently perched, making long term preservation impossible. Helm et al.  suggest that instead it may be possible to make moulds of the tracks.

The large size and distinctive nature of the tracks makes it almost certain that the track-maker was a Giraffe, though Helm et al. did consider the possibility of other track-makers. Southern Africa is home to a number of Bovid species, which are often hard to identify from their tracks, so that such markings are generally referred to simply as 'large Bovid', 'medium Bovid' or 'small Bovid', however even the tracks of even the largest of these animals are difficult to mistake for those of the much larger Giraffe.

One possible extinct track maker is the Sivathere, or Short-necked Giraffe, Sivatherium maurusium, a large animal closely related to the Giraffe, and therefore presumably capable of making similar sized tracks (no tracks directly attributed to a Sivathere have ever been found). However Helm et al. reject the idea of a Sivathere as the track-maker for a number of reasons. Firstly, while the exact date of extinction of the Sivathere is unclear, the youngest known fossils of the species date to about 400 000 years ago, making it likely that they had vanished by the time the Still Bay tracks were laid down. Secondly, all known Sivathere remains are found much further to the north, with the most southerly specimens known coming from around Bloemfontein, making it unlikely that one made tracks at Still Bay (although Giraffes are not known from much further south). Finally, while similar in general proportion to Giraffes, Sivatheres were much more robust, had had a wider gait, which means that their tracks were unlikely to have closely resembled those of Giraffes. 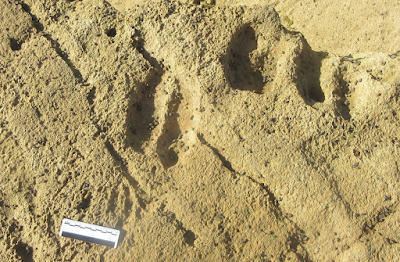 Detail of four Giraffe tracks. The best preserved adult track is left of centre, and the best preserved purported juvenile track appears below it, above the top right corner of the 10 cm scale bar. Helm et al. (2018).

Giraffes are known in Western Cape Province, but are not usually found south of the Orange River, with the most southerly recorded sighting being made at Spoeg River in Namaqualand, by Danish explorer Pieter Van Meerhoff in 1663; this is about 700 km to the north of Still Bay, and in a completely different climatic zone, dominated by Vachellia karroo woodlands (thornscrub) on deep sandy soils.

Representations of Giraffes have been found in rock art paintings in the Hex River Valley, about 250 km to the northwest of Still Bay, which indicates that the animals were familiar to the people there about 2000-1600 years ago when these images were made. However the rock art makers are believed to have been nomadic in nature, ranging over a wide area of the Western Cape in response to the changing seasons, and there is no reason to believe that they actually observed Giraffes in the Hex River Valley.

There are also some fossil Giraffe remains in the South African Museum in Cape Town which were originally identified as having come from Darling’, about 350 km to the northwest of Still Bay and 450 km south of Namaqualand, but precise details of how and where these specimens were obtained is lacking, and they are now thought unlikely to have come originally from Darling'. 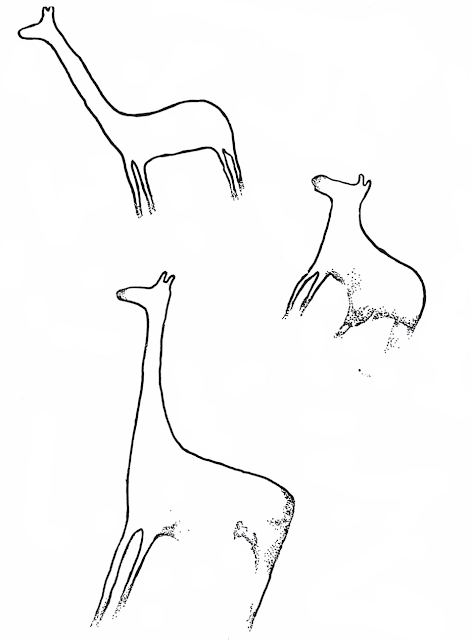 The Still Bay area today has a wet temperate climate and coastal fynboss vegetation dominated by Proteas and Wild Olives, quite unsuitable for Giraffes. However this climate is known to have varied considerably during the Pleistocene, as has the position of the coastline in the area, which would have retreated away from the area during periods of glacial maximum, including the period when the tracks were laid down.

Glacial periods are generally associated with cooler, drier climates, even in areas unaffected directly by glaciation. However the Late Pleistocene fauna of the Palaeo-Agulhas Plain, as represented by fossil assemblages from Nelson Bay Cave and Klasies River, includes many species found further north in the Cape today, such as Grysbok, Raphicerus melanotis, Grey Duiker, Sylvicapra grimmia, and Bushbuck, Tragelaphus sylvaticus (these assemblages contain predominantly small animals as they are primarily Human hunting remains), suggestive of a warmer climate, possibly with a seasonal climate with large grazers visiting the area during a local wet season, presumably driven more by the loss of a maritime influence on the climate than by global cooling.

The presence of Giraffes in this environment adds further support to the idea of a subtropical grassland biome extending southwards into an area with a temperate climate today during periods of glacial cooling, as these animals are found exclusively in subtropical grasslands in Southern Africa today. 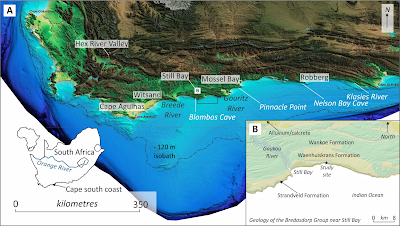 (a) Locality of the study area in the context of the south coast of South Africa. The continental shelf which borders this coastline reaches the broadest extent in South Africa, and the 120 m isobath lies up to 100 km offshore. The relatively shallow and low-gradient Agulhas Bank sweeps from Cape Agulhas in the southwest to Robberg in the east. (b) The dominant geological units at the study site, which are formations of the Bredasdorp Group and were deposited in the Neogene and Pleistocene. Helm et al. (2018). 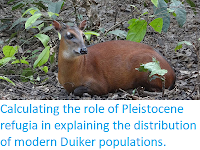 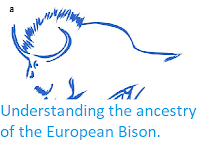 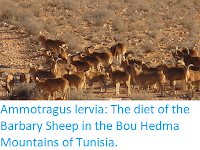 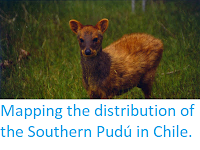 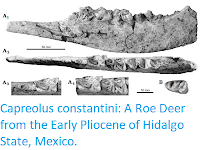