Comet C/2015 O1 (PANSTARRS) makes its closest approach to the Earth on Thursday 5 April 2018 reaching a distance of 3.23 AU from the Earth (3.23 times as far from us as the Sun, or 483 687 000 km). At this distance the comet will not be naked eye visible, having a magnitude of 14.34, which means it would require a good telescope to observe it, and then preferably in the Northern Hemisphere, as it is currently in the constellation of Bootes, which cannot be seen clearly from to far south of the Equator. 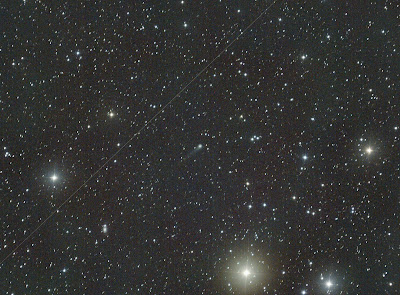 Comet C/2015 O1 (PANSTARRS), imaged on 19 February 2018. Comet is small object at centre of image with a faint tail. The elongate objects are stars, with the elongation being caused by the long exposure needed to take the photograph. Line crossing image is a satelite. Roland Fichtl/Seiichi Yoshida.

C/2015 O1 (PANSTARRS) was discovered on 19 July 2015 by the University of Hawaii's PANSTARRS telescope. The name C/2015 O1 (PANSTARRS) implies that it is a non-periodic comet (C/) (all comets are, strictly speaking, periodic since they all orbit the Sun, but those with periods longer than 200 years are considered to be non-periodic), that it was the first comet (comet 1) discovered in the second half of July 2015 (period 2015 O) and that it was discovered by the PANSTARRS telescope. 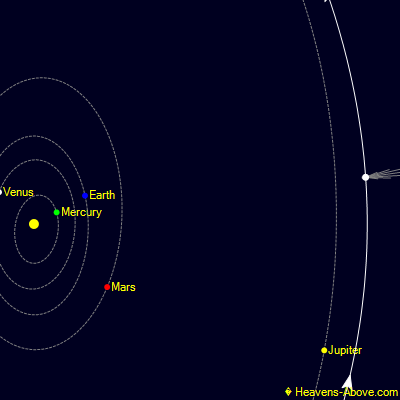 The orbit of C/2015 O1 (PANSTARRS) at its closest to the Earth. Heavens Above. 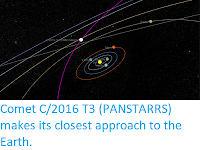 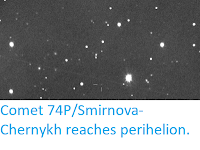 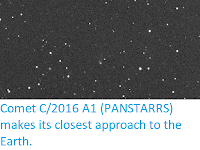 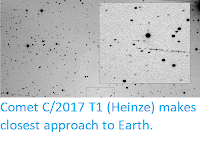 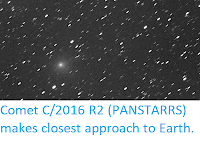 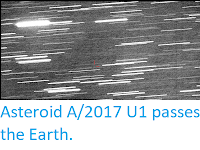