Detecting salts on the surface of Europa.

Europa is the fourth largest moon of Jupiter, and the fifteenth largest body in the solar system. It was one of the four moons discovered by Galileo Galilei in 1610. It has long been thought that Jupiter's icy moon Europa has an ocean beneath its surface, kept liquid by the heat generated by the tidal forces excerpted by Jupiter's gravity, and that this may possibly be as much as 160 km deep, on a moon with a radius of slightly under 1600 km. A possible subterranean sea of Europa is considered the most likely place to look for non-terrestrial life in our Solar System, but the likelihood of life being found there depends very much on the chemical composition of that ocean. 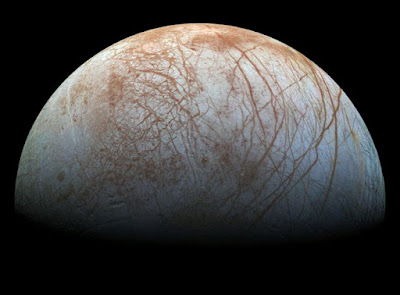 The surface of Europa. NASA/JPL/Caltech/SETI Institute.

Interpretation of spectra from the Galileo Near-Infrared Mapping Spectrometer suggest that the surface of Europa is dominated by three different chemical terrains; water ice, sulphuric acid hydrate, and a third terrain of less certain origins. Parts of the surface of Europa have a distinct yellowish tinge, which is strongly suggestive of sulphur salts, and magnesium sulfate has been suggested as likely candidate for this colouring. This is plausible for the Trailing Hemisphere of the moon (Europa, like our Moon, is tidally locked, so that it always has one face pointing towards Jupiter; this also means that one side of the moon is always facing forwards, in the direction of movement, the Leading Hemisphere, and one always faces back, the Trailing Hemisphere), which is thought to be bombarded by magnetic clouds of sulphur ions originating from volcanic eruptions on Io, which move outwards (away from Jupiter), while still orbiting at a higher speed than Europa, and therefore overtake its Trailing Hemisphere.

However, the yellowish tinge is also associated with Europa's Leading Hemisphere, and specifically with the Chaos Terrains, areas that show appear broken and disrupted, with sections of what appear to be shattered crust locked in smoother areas of ice, resembling icebergs caught in a frozen sea. Such areas are unlikely to be preferentially bombarded with sulphur from Io, and are thought to reflect the chemistry of the oceans beneath the ice, which is occasionally exposed by cracking of the surface. Furthermore, recent studies of these Chaos Terrains with the the adaptive optics system at the Keck Observatory have shown that they have a different spectrographic signature, and therefore chemistry, to the sulphur rich areas of the Trailing Hemisphere. 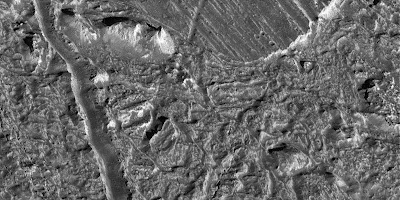 A Galileo image of a Chaos Terrain on Europa. NASA/JPL/Caltech.

In a paper published in the journal Science Advances on 12 June 2019, Samantha Trumbo and Michael Brown of the Division of Geological and Planetary Sciences at the California Institute of Technology, and Kevin Hand of the Jet Propulsion Laboratory also at the California Institute of Technology, describe the results of a spectographic study of Chaos Terrains of Europa's Leading Hemisphere by the Hubble Space Telescope, and the implications of this.

Trombo et al. searched these areas produced a spectrum with distinct absorption centres (i.e. wavelengths at which light is absorbed rather than reflected) at wavelengths of 460 and 720 nm (blue and red light), which is consistent with the presence of sodium chloride. The presence of sodium chloride in waters bubbling up from the Europan interior would have important implications, as it is thought that more hydrological circulation and differentiation is needed to develop a sodium chloride rich water system than a sulphate rich water system, which could be formed simple leaching of sulphates from volcanic rock.

The 450 nm absorption centre was found on Europa, but not the 720 nm absorption centre. This is in conflict with the spectra obtained from sodium chloride in the laboratory, but this does not necessarily indicate that the substance being detected is not sodium chloride, as the laboratory samples were bombarded with light radiation at a far higher intensity than anything on the surface of Europa, and Trombo et al. reason that sodium chloride is still the most plausible explanation for the spectra obtained.

Map of the strength of the 450 nm absorption. The observed feature maps solely to the Leading Hemisphere. Black outlines correspond to large-scale chaos regions. The largest absorptions fall within the chaos region Tara Regio (~85°W), with additional concentration in eastern Powys Regio (~125°W). This distribution is separate from the geography of sulphur radiolysis and suggests a subsurface source, consistent with the chloride hypothesis for Europa’s endogenous material. The spatial resolution of the mapped data is ~150 km at the sub-observer point. Trombo et al. (2019). 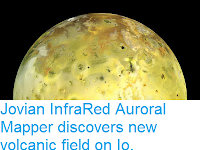 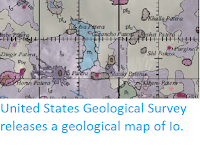