Laacher See: Assessing the implications of deep low-frequency Earthquakes beneath a German volcano.

The Laacher See is a volcanic lake in the Eifel region of the Rhineland-Palatinate, Germany, about 23 km to the south of Bonn, which is thought to have last erupted around the end of the Pleistocene, about 12 900 years ago. The lake has a roughly circular shape, and is about 2 km in diameter, with steep sides that reveal its nature as a volcanic crater. The current lake is thought to have formed in an eruption similar in scale to that of the Mount St Helens eruption of 1980 or the Mount Pinatubo eruption of 1991, part of a volcanic process associated with the collision between the African and Eurasian plates in the East Eifel Volcanic Field that began about 500 000 years ago. Whilst it is considered highly unlikely that a similar eruption could happen today, the location of the volcano in a densely populated area of central Europe means that any such eruption would be particularly devastating, for which reason the area is monitored carefully for any seismic activity, as this can indicate the movement of magma within chambers beneath a volcano, and therefore possibly herald a forthcoming eruption. 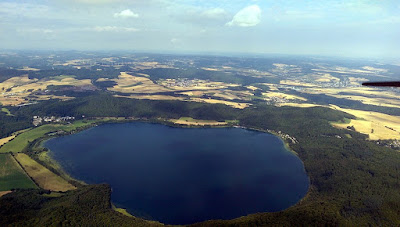 Hensch et al. collected data from a network of seismic monitors operated by the Seismological Survey of Southwest Germany, the joint Seismological Services of Rhineland-Palatinate and Baden-Württemberg, Seismological Services of North Rhine-Westphalia and Hesse, the GEOFON network, the German Regional Seismic Network, and the Earthquake Observatory Bensberg, as well as temporary monitoring stations operated by the Karlsruhe Institut of Technology, and the German Research Center for Geosciences.

The third cluster comprises Earthquakes with Magnitudes of between  0.2 and 1.3, that occurred at depths of between 19 and 26 km. Fifty two of these happened over a period of nine days between 4 and 13 June 2017, while a further four happened over six minutes on 28 April 2018.

The final cluster comprises events with Magnitudes of between 0.6 and 1.8 that happened at depths of between 8 and 14 km. Five of these Earthquakes happened over a period of five minutes on 14 April 2015, and a further seven occurred over a six minute period on 5 October 2019. 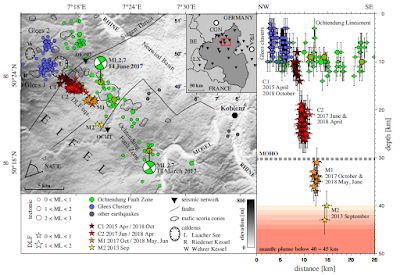 Topographic map of the East Eifel Volcanic Field including faults, calderas and scoria cones. Brittle earthquakes are marked as dots, deep low-frequency microearthquake events as stars. Seismic stations are indicated as inverse triangles. Red circles mark the three largest tectonic earthquakes (Magnitude > 2.3) in 2017. The city of Koblenz is marked with a black dot. The
small overview map outlines the target region as a red box, the state of Rhineland-Palatinate is highlighted in dark grey. LX stands for Luxemburg and BE for Belgium, white dots give the cities of Cologne (CGN) and Frankfurt am Main (FRA). A depth section of all earthquakes is given in the right-hand panel, seen in direction to N45°E. Error bars indicate location uncertainties. Hensch et al. (2019).

All of these events happened in a narrow, subvertical channel between approximately 10 and 40 km depth, and the pattern pf deep, low frequency Earthquakes seen closely resembles that at active volcanic systems at Askja volcano in Iceland, and the Aleutian Arc of Alaska, both of which have been demonstrated to have been connected to the magmatic plumbing system beneath the volcanoes, including the recharge of shallow magmatic reservoirs (the reservoirs from which volcanic activity on the surface is fed).

The apparatus also detected a series of shallow Earthquakes at depths of between 3 and 10 km, to the west and northwest of the Laacher See caldera, which they refer to as the Glees Cluster, in reference to the village in the district of Ahrweiler. These Earthquakes may be related to the events beneath the Caldera, or may or may not be related to the Laacher See events.

The Earthquakes beneath the Laacher See caldera are typified by low frequencies and long wavelengths, and always have Magnitudes of less than 2.0. They occur in episodic, short pulses at specific depth intervals. In addition, they are unusually deep and only found in a narrow, nearly vertical channel between about 10 and 40 km depth, dipping approximately 80◦ to southeast. This closely resembles the pattern seen at a number of volcanic caldera prone to sudden explosive eruptions, including the Askja volcano in the Northern Volcanic Zone of Iceland and the Kluchevskoy volcano group on the Kamchatka Peninsula.

The narrow and very steep nature of the zone in which the Earthquakes are occurring strongly suggests magma ascending through a dyke (vertical crack) system beneath the caldera, however such activity does not necessarily result in eruptions at the surface. The key indicator of forthcoming eruptions appears to be the difference between the density of the magma in the upper part of such systems and the surrounding rock; if there is a sharp difference in density between the magma and the host rock (which may be indicative of a gas rich magma) then an eruption is likely, but if the difference is low (which may suggests that gas is escaping the magma) then an eruption becomes unlikely.

The Laacher See Earthquakes occur in four distinct groups, though there is no progression between to groups, as might be expected from a steadily rising magma body, but rather the Earthquakes appear to occur in four different zones independently, suggesting four small magma bodies instead of a single large one.

The Earthquakes of the Glees Cluster, if related to the caldera Earthquakes, could have two possible causes; they could represent magma moving through a sill (horizontal crack) system, ot they could be caused by gas escaping from deeper magma sources (such as the chambers beneath the Laacher See), something which has been demonstrated beneath the Upptyppingar volcano in Iceland.

The data available on the Laacher See Earthquakes does not allow Hensche et al. to draw firm conclusions about the possibility of any future eruptions from the site. The magma beneath the volcano appears to be found in four distinct areas at the moment, but it is unclear if there is overall upward movement on a longer time scale than that covered by the study to date.

The movement of magma upwards from one chamber to another, and subsequent mixing of different magmas, can result in explosive eruptions, but such eruptions are usually preceded by a distinctive type of volcano-tectonic earthquake swarm not yet detected beneath Laacher See, suggesting that no such eruption is likely within the immediate future. 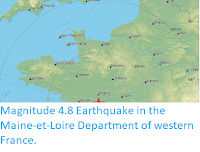 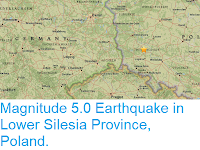 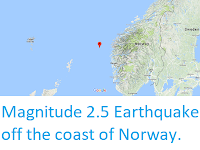