Magnitude 5.1 Earthquake to the east of Rhodes.

The United States Geological Survey recorded a Magnitude 5.1 Earthquake at a depth of 16.7 km, about 36 km to the east of the island of Rhodes slightly before 5.45 am local time (slightly before 4.55 am GMT) on Thursday 3 October 2019. No damage or injuries have been reported following this event, but people have reported feeling the event from Rhodes and neighbouring islands, as well as parts of the Anatolian (Turkish) mainland
. 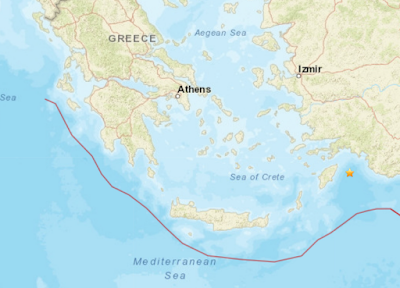 The approximate location of the 3 October 2019 Rhodes Earthquake. USGS.


The island of Rhodes lies on the boundary between the Anatolian Plate, to the north, the Aegean Sea Plate (underlying the Peloponnese, Attica, The Cyclades Islands, Crete, the Dodecanese Islands and Turkey to the southeast of the Taurus Mountains) to the west and the African Plate to the south. Northern Greece and the north coast of Turkey lie on the Eurasian Plate. Both countries are highly prone to earthquakes because of this.

To the east the Arabian Plate  is being pushed north and west by the movement of the African Plate, further to the south. This leads to a zone of tectonic activity within the province, as the Arabian and Anatolian plates are pushed together, along the East Anatolian Fault, and past one-another, along the Dead Sea Transform.


This movement also leads to a zone of faulting along the northern part of Turkey, the North Anatolian Fault Zone, as the Anatolian Plate is pushed past the Eurasian Plate, which underlies the Black Sea and Crimean Peninsula  (transform faulting). This is not a simple process, as the two plates constantly stick together, then break apart as the pressure builds up, leading to Earthquakes, which can be some distance from the actual fault zone. 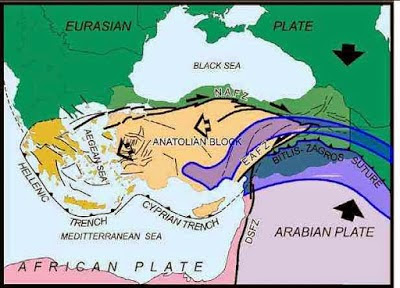 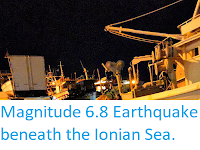 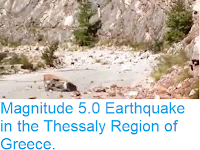