Brittle Stars, Ophiuroidea, are five-limbed Echinoderms related to Starfish and having a similar body-plan. However while the five limbs of the Starfish are rigid extensions of the central disk, and movement is achieved by means of tube-feet on the underside of the animal, the limbs of Brittle Stars are fully articulated and used for locomotion. The fossil record of Brittle Stars goes back to at least the Early Ordovician, though these Palaeozoic Brittle Stars have not been extensively studied. Recent studies in the Ryukyu Islands of southwestern Japan have suggested that submarine caves may be an important, and underexplored habitat for Brittle Stars, with explotation teams visiting cave systems on Christmas Island, an Australian terretory to the south of Java, from 2010 to 2012 also reporting seeing Brittle Stars.

In a paper published in the Raffles Bulletin of Zoology on 5 August 2019, Masanori Okanishi of the Misaki Marine Biological Station of the University of Tokyo, Yuichi Oba of the Department of Environmental Biology at Chubu University, and Yoshihisa Fujita of the Okinawa Prefectural University of Arts, describe a new species of bioluminescent, cave-dwelling Brittle Star from Thunderdome Cave on the north coast of Christmas Island.

Thunderdome cave is located on the central part of the north shore of Christmas Island, about 17 m bellow sea level. It has a wide entrance, 10-15 m across, leading to a cave that extends 20-30 m to the left of the entrance, and a few metres to the right. The left hand cave opens into an airpocket. 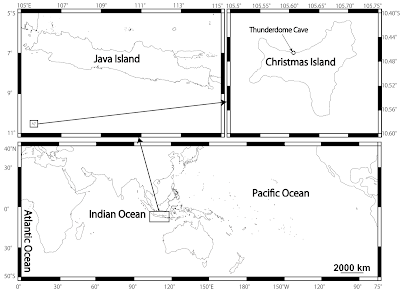 The new species is placed in the genus Ophiopsila, and given the specific name xmasilluminans, implying that it is bioluminescent, and comes from Christmas Island. The examined specimens of the species had cenral disks 5.0 to 6.3 mm across, and arms up to 85 mm in length. The disc surface is entirely covered by thick skin with embedded small and delicate scales and granules. Ophiopsila xmasilluminans was found living burried beneath the sand at the bottom of the cave, with its disk and the inner part of its tentacles covered, and only the outer parts of its tentacles exposed. The tentacles have bands of bioluminescent material on every fourth to sixth tentacle, which flash when the tentacle is touched. Quite how this is useful is unclear, as the cave is also home to numerous sighted Fish and Crustaceans, which might be expected to be attracted to such flashing, and which would be far more capable of consuming a Brittle Star than the other way around. 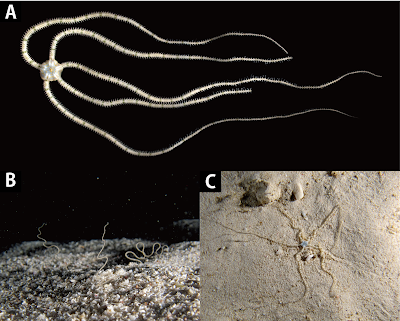 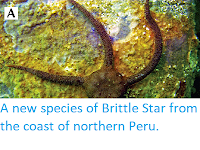 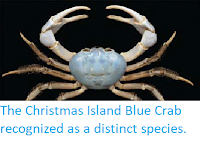