The Delta Aurigid Meteor Shower is expected to be visible between 10 and 18 October this year (2019), with peak activity happening at about 9.00 pm GMT on Friday 11 October, although in the case of the Delta Aurigids 'peak activity' only implies about 2 meteors per hour. The meteor shower is considered very hard to spot - almost impossible for most amateur astronomers - and viewing will be particularly hard this year as peak activity comes slightly before the Full Moon on Sunday 13 October, so that the meteors may be obscured by the brightness of the Moon. However, because this meteor shower is so poorly understood, any observations that are made, particularly photographic ones, are of great interest to astronomers in the field. The meteors appear to radiate from a point in the constellation of Auriga (hence the name), which is in the northern sky, making the constellation even harder to spot from the Southern Hemisphere. 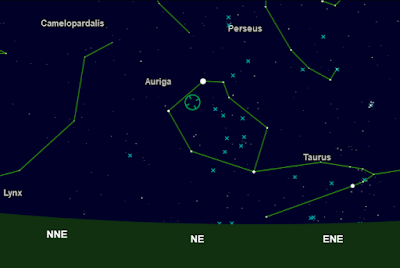 The radiant point of the Delta Aurigid Meteors. In The Sky.

The Delta Aurigids were once thought to have a much more drawn out annual occurrence, starting in early September, but careful study of the meteor stream has shown the earlier part to be a separate meteor shower, now known as the Southern Perseids. The Delta Aurigid Meteors as currently described may still represent four separate showers, one peaking on 30 September, one on 2 October, one on 7 October and one on 13 October, with the apparent peak on 11 October just being the point of greatest overlap between the two showers.

Meteor streams are thought to come from dust shed by comets as they come close to the Sun and their icy surfaces begin to evaporate away. Although the dust is separated from the comet, it continues to orbit the Sun on roughly the same orbital path, creating a visible meteor shower when the Earth crosses that path, and flecks of dust burn in the upper atmosphere, due to friction with the atmosphere.

As it is unclear if the Delta Aurigids are even a single meteor stream, and the orbital path of the particles is uncertain, it is impossible to connect them to a particular comet. However, there is only a single known comet with an orbital path similar to that of the Delta Aurigids,C/1972 E1 (Bradfield), a Long Period Comet that last visited the Inner Solar System in 1972, and which is thought to have an orbital period of about 11 000 years.

Discovered on 13 March 1972 by Australian astronomer William Bradfield, C/1972 E1 (Bradfield) has an orbit tilted at an angle of 123.7° to the plane of the Solar System, that takes it from 0.93 AU from the Sun to an estimated 989 AU from the Sun, with an average distance of 494.8 AU from the Sun. This last figure is very different from all estimates for the Delta Aurigids, but the other parameters match closely, and since the meteor shower is still poorly understood C/1972 E1 (Bradfield)remains a potential parent body. 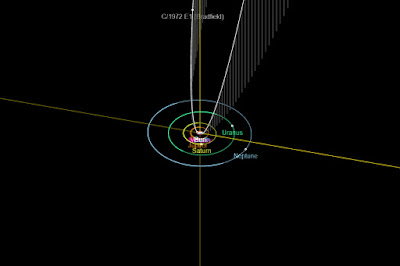 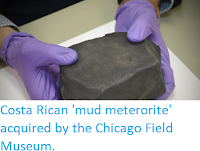