Cyanide gas detected in the coma of Interstellar Object 2I/Borisov.

Solar System formation models suggest that a large number of planetesimals were ejected to space as the giant planets formed and migrated. Most of these planetesimals are expected to be icy (i.e. comet-like) with only a small fraction of them being rocky objects. Assuming that similar processes have taken place elsewhere in the Galaxy, a large number of planetesimals are wandering through interstellar space, some eventually crossing the Solar System. While many decades of comet and asteroid studies have yielded formation models that explain the mass distribution, chemical abundances, and planetary configuration of the Solar System today, studies of exoplanetary  systems have shown that many diferent planetary system architectures can exist. It is therefore uncertain whether the Solar System is typical of planetary systems in general. Interstellar Objects provide an opportunity to study the planet-building process in extrasolar planetary systems.

The first known Interstellar Object, 1I/2017 U1 ('Oumuamua), was discovered on 2017 October 19 and followed by a short intense period of observation as it faded quickly as it receded from Earth. 1I was very red and small, with an average diameter of 200 m, assuming it was dark, but it could possibly be as small as 100 m across if it had a higher albedo. `Oumuamua's rotational light curve was extraordinary, with a brightness range of over 2.5 magnitudes, implying that it had a very elongated nucleus with an axis ratio over 5:1, and perhaps as large as 10:1 (i.e. it was at least five times as long as it was wide, and possibly ten times as long as it was wide). Furthermore, it was found to be in an excited rotation state, which was likely caused by its ejection from its home star system. Although there were very sensitive searches for dust and gas coming from `Oumuamua, none were detected. Spectroscopy only revealed a red featureless spectrum similar to that expected for an irradiated cometary surface. Nevertheless, non-gravitational accelerations were detected in `Oumuamua's motion, by combining astrometry from the ground and with the long extension of arc afforded by Hubble Space Telescope observations, and the only plausible explanation for this acceleration was comet-type outgassing at a level below our ability to detect it during the 2-week period that was available for detailed observations.

One of the most important questions left unanswered from the study of 'Oumuamua was 'What is it made of?'. It had been expected that any Interstellar Objects would probably be ice-rich, displaying cometary activity if it passed within the sublimation distance of the Sun for its constituent ices (the distance from the Sun at which it was sufficiently heated to cause solid ices on its surface to sublimate, or turn directly from a solid to a gasseous state). This in turn would allow spectroscopy of the coma gases. The near-inert nature of 'Oumuamua was initially puzzling, although subsequent studies have shown it is consistent with possible ejection mechanisms and subsequent evolution in interstellar space.

On 2019 August 30 Gennady Borisov at the MARGO observatory in Crimea discovered Comet C/2019 Q4 (Borisov) at small Solar elongation in the morning twilight. The orbit was very quickly shown to be hyperbolic, with an eccentricity of greater than 3. On 24 September 2019 it was offi cially named by the International Astronomical Union as 2I/Borisov, the second known Interstellar Object. Unlike 'Oumuamua, this second Interstellar Object was discovered before perihelion (on 8 December 2019, when it reached 2.0 AU from the Sun, twice the distance between the Earth and the Sun) and will be well placed for observing before it goes into Solar conjunction again (disappears behind the Sun) in October 2020. Initial photometry showed it to possess broad-band optical colours similar to other active comets with significant dust comae. An optical spectrum showed a featureless red reflectance spectrum (spectrum of reflected light). However, to probe the composition of an Interstellar Object and compare its nature to that of similar bodies in our own Solar System requires the identification and measurement of emission or absorption features within its spectrum. 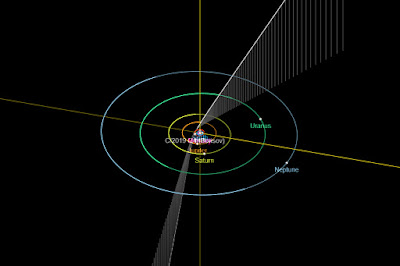 2I/Borisov was observed with the 4.2 m William Herschel Telescope and ISIS Spectrograph on La Palma on 20 September 2019. At this time the comet was at a heliocentric distance of 2.66 AU (2.66 AU from the Sun), and a geocentric distance of 3.25 AU (3.25 AU from the Earth). Due to the faintness of the comet, atmospheric extinction and the rapidly brightening sky, only two of the four exposures obtained were found to contain cometary  flux at wavelengths of less than 4500 Å. There was thin cloud present during the observations, and combined with the high airmass, Fitzsimmons et al. caution that the uncertainty in the flux from the comet could potentially be at the level of tens of percent.

Additional observations were carried out with the TRAPPIST-North Telescope at Oukaimeden observatory, Morocco. Data was obtained before sunrise on 11, 12, 16 and 19 September 2019. Attempts were made on other dates but were thwarted by moonlight. With TRAPPIST-North there was only a 30 minutes window to observe the comet while it was more than 25 ° above the horizon. 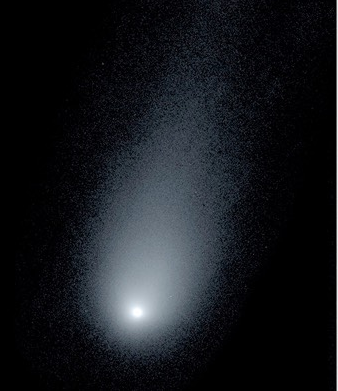 To identify any emission bands, Fitzsimmons et al. removed the underlying continuum resulting from reflected sunlight by dust. We used a scaled and reddened standard reference Solar spectrum. After removing the Solar spectrum, the comet spectra should only consist of gas fluorescence emission features; this is because dust will only reflect light, but gas molecules will absorb energy and then re-emit it at specific wavelengths.

The spectrum before and after removal of the dust continuum CN (cyanide ion) gas emission due to Solar fluorescence at 3880 Å. Both the wavelength and the asymmetric profile confirm this as CN. No other emission features are apparent in this spectrum. Based upon the size of this peak, Fitzsimmons et al. calculate that the cyanide was sublimating from the surface of 2I/Borisov at a rate of approximately 70 g of cyanide per second.

In active Solar system comets, the second most prominent emission feature in optical spectra is the C₂ (the carbon-carbon bond, which is found in molecules such as ethane and ethanol) emission band, with a band head at 5167 Å. Fitzsimmons et al. were not able to detect a distinct carbon-carbon peak that stood out above the background interference in the sprectra obtained for 2I/Borisov, but this could at least be used to determine a maximum amount of carbon-carbon relative to cyanide.

(a) Flux calibrated spectrum of 2I/Borisov through a 200" by 800" aperture centered on the comet. Also shown is a scaled Solar spectrum reddened to match the observed dust continuum. (b) Spectral region around the CN (cyanide) emission band with the background dust continuum subtracted. Fitzsimmons et al. (2019).


2I/Borisov at 2.7 AU appears to be similar but slightly less active than many long-period comets observed at similar distances. These include C/2013 R1 (Lovejoy), C/2013 A1 (Siding Spring), C/2014 W2 (PANSTARRS), all of which produced cyanide at slightly higher rates than 2I/Borisov when at similar distanced from the Sun.Short-period comets often display weaker outgassing rates, and 9P (Tempel 1) and 67P (Churyumov-Gerasimenko) both had lower cyanide emission rates than 2I/Borisov when at similar distances from the Sun. Hence the range of gas production rates measured for Solar system comets spans the measurement of 2I/Borisov. Similarly, Fitzsimmons et al. find that the gas/dust and relative gas production rates for 2I/Borisov are not obviously different to `normal' Solar System comets.

Given this similarity, Fitzsimmons et al. use the measurements to estimate the possible gas-to-dust-ratio emitted by the nucleus, assuming the measured properties of Solar System comets. For the gas mass loss rate, this is straightforward. as normal comets produce hydrogen cyanide, water, carbon monoxide, and other gasses in predictable ratios, which if also true for 2I/Borisov, would suggest gasses were sublimating from the surface of the comet at about 57 kg per second during the time of the observations.

It is more difficult to estimate the dust production rate. Taking the simplistic assumptions of a single dust grain size of 1 μm, a grain albedo of 0:04 and a radial outflow, the largest uncertainty is from the dust velocity. If the dust velocity is assumed to be 100 meters per second then 2I/Borisov would be producing about 560 kg of dust per second, but if the dust velocity is only 10 meters per second, then the comet will only produce about 56 kg of dust per second. So, the dust-to-gas ratio can be from one-to-one to ten-to-one. This is a very uncertain estimate, but it is in line with in-situ Rosetta pre-perihelion measurements of comet 67P (Churyumov-Gerasimenko), which had a dust/gas ratio of about four-to-one.

While they felt it was premature to do any detailed modelling with the current limited data, Fitzsimmons et al. did explore the parameter space further to place some limits on the nucleus size from the ground-based photometry and cyanide production rate. First, assuming that all of the  flux within a 500" radius photometry aperture for data obtained from the Canada-France-Hawaii Telescope on 10 September 2019 was scattered light from a nucleus with an albedo of 0.04, then this would imply a nucleus radius of 8 km. However, given that there is visible dust in the coma, this is an extreme upper limit.

Fitzsimmons et al. also use a surface ice sublimation model with constraints on the gas production from their cyanide observations to investigate the activity for 2I/Borisov, and get some information about the minimum nucleus radius. By assuming that the cyanide/water ratio for 2I/Borisov is typical of Solar System comets, they derive a water sublimation rate of 38.9 to 152.6 kg of water per second. However, if 2I/Borisov is as depleted in cyanide as spectrographic studies of 1I/2017 U1 ('Oumuamua) suggested that body was, then it would produce water at a rate of about 3290.7 kg per second.

Based upon theses molecule and dust evolution rates and a presumed albedo (reflectiveness of 0.04, which is about typical for comets, then Fitzsimmons et al. calculate that the core of 2I/Borisov would be between 0.7 and 3.3 km in diameter.

Models of planetary system predict that the formation of the icy planetesimals we call comets should be ubiquitous. Yet models or protoplanetary disks predict a range of possible disk compositions. For example, the hydrogen cyanide/water ratio can vary by a factor of more than 100 in protoplanetary disks depending on distance from the star and evolutionary stage. In addition, within the Solar system, 30% of comets exhibit strong depletions in carbon chain molecules such as C₂ and C₃, and signi cant variations in nuclear ice species such as HCN ()hydrogen cyanide) and CH₃OH (methanol) exist. The observation of primary ice species such as H₂O, CO₂, CO, or their dissociation products, would place the analysis presented here on a much rmer footing. Current knowledge of the composition of 2I/Borisov is still relatively unconstrained, for example it is not yet known if 2I/Borisov is depleted in C₂. Fitzsimmons et al.'s data show that 2I/Borisov is not C₂ rich, and the cyanide to dust ratio is normal when compared to other comets. The normal scale lengths for production of cometary cyanide via photodissociation match the observed column density distribution, indicating similar production pathways. If it were not for its interstellar nature, current data shows that 2I/Borisov would appear as a rather unremarkable comet in terms of activity and coma composition. 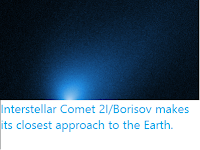 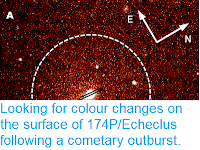 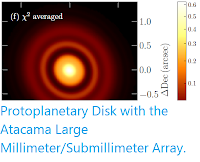 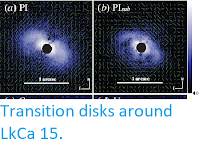