The United States Geological Survey recorded a Magnitude 5.8 Earthquake at a depth of 97.2 km, approximately 6 km to the south of the town of Santo Domingo Zanatepec in the east of Oaxaca State, Mexico, at about 10.40 pm on Saturday 4 January 2020, local time (about 4.40 am on Sunday 5 January, GMT). This even was felt across much of southern Mexico, as well as northern parts of Guatemala and Belize, but there are no reports of any damage or casualties. 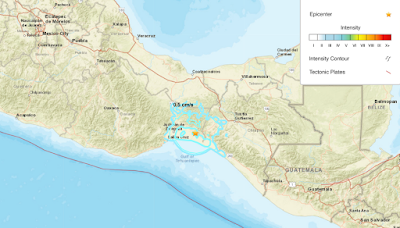 The approximate location of the 4 January 2020 Oaxaca Earthquake. USGS.

Mexico is located on the southernmost part of the North American Plate. To the south, along the Middle American Trench, which lies off the southern coast off Mexico, the Cocos Plate is being subducted under the North American Plate, passing under southern Mexico as it sinks into the Earth. This is not a smooth process, and the plates frequently stick together then break apart as the pressure builds up, causing Earthquakes on the process.

The position of the Cocos, Nazca and Rivera Plates. MCEER/University at Buffalo.
In a paper published in the Journal of Geophysical Research, in 2012, a team led by Igor Stubailo of the Department of Earth and Space Sciences at the University of California Los Angeles, published a model of the subduction zone beneath Mexico using data from seismic monitoring stations belonging to the Mesoamerican Seismic Experiment, the Network of Autonomously Recording Seismographs, the USArray, Mapping the Rivera Subduction Zone and the Mexican Servicio Sismologico Nacional.
The seismic monitoring stations were able to monitor not just Earthquakes in Mexico, but also Earthquakes in other parts of the world, monitoring the rate at which compression waves from these quakes moved through the rocks beneath Mexico, and how the structure of the rocks altered the movement of these waves.
Based upon the results from these monitoring stations, Stubailo et al. came to the conclusion that the Cocos Plate was split into two beneath Mexico, and that the two plates are subducting at different angles, one steep and one shallow. Since the rate at which a plate melts reflects its depth within the Earth, the steeper angled plate melts much closer to the subduction zone than the shallower angled plate, splitting the Trans-Mexican Volcanic Belt into sections above the different segments of the Cocos Plate, and causing it to apparently curve away from the subduction zone. 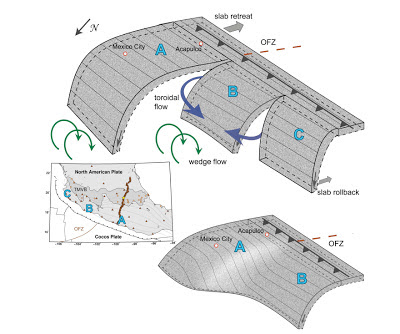 Top the new model of the Cocos Plate beneath Mexico, split into two sections (A & B) subducting at differing angles. (C) Represents the Rivera Plate, subducting at a steeper angle than either section of the Cocos Plate. The Split between the two has been named the Orozco Fracture Zone (OFZ) which is shown extended across the Cocos Plate; in theory this might in future split the Cocos Plate into two segments (though not on any human timescale). Bottom Left, the position of the segments on a map of Mexico. Darker area is the Trans-Mexican Volcanic Belt, orange circles are volcanoes, brown triangles are seismic monitoring stations, yellow stars are major cities. Bottom Right, an alternative model showing the subducting plate twisted but not split. This did not fit the data. Stubailo et al. (2012).
Witness accounts of Earthquakes can help geologists to understand these events, and the structures that cause them. The international non-profit organisation Earthquake Report is interested in hearing from people who may have felt this event; if you felt this quake then you can report it to Earthquake Report here.
See also... 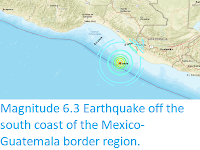 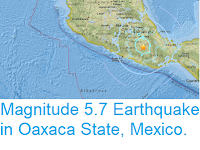