A Mediterranean Worm Lizard from the Middle Miocene of Catalonia, northeast Spain.

Worm Lizards (Amphisbaenians) are small, limbless Lizards related to Lacertid Lizards (Wall Lizards). They are thought to have originated in the Late Cretaceous, though the earliest fossils that can be confidently assigned to the groups come from the Palaeocene. Most of the 150-190 living species are found in South America, Africa or on the Arabian Peninsula, though members of one family, the Blanidae, or Mediterranean Worm Lizards, are found in Europe. The Blanidae currently comprises five extant species, all placed on the genus Blanus. Blanus strauchi from the eastern Mediterranean, Blanus cinereus and Blanus mariae from Iberia, and Blanus mettetali and Blanus tingitanus from northwest Africa. In addition there are two previously described fossil species from Europe, Blanus antiquus from Germany and Austria and Blanus gracilis from Italy and the Czech Republic. In addition an older species of Worm Lizard of uncertain affinities, Palaeoblanus tobieni, is known from France, Germany, Italy and Spain.

In a paper published in the journal PLoS One on 4 June 2014, a team of scientists led by Arnau Bolet of the Institut Català de Paleontologia Miquel Crusafont at the Universitat Autònoma de Barcelona, describe a new species of Mediterranean Worm Lizard from the Middle Miocene of Abocador de Can Mata in the Vallès-Penedès Basin of Catalonia in northeast Spain.

The new species is described on the basis of an almost complete 11.3 mm skull, largely trapped within a carbonate (limestone) concretion and judged too delicate to be extracted, which was therefore studied by computed tomography scanning, plus a number of separate vertebrae, some of them articulated. It is named Blanus mendezi in honour of Josep Méndez of the Institut Català de Paleontologia, who discovered the specimen while collecting microvertebrate remains.

Blanus mendezi is exceptionally well preserved for a Blanid fossil, largely because it is trapped within its matrix. Most fossil Blanids are preserved only as isolated bones, making identification to species level difficult, as the group are morphologically conservative. The two previously described fossil species of Blanus are identifiable only from their jaws, with Blanus antiquus being larger and more robust than Blanus gracilis, and having homodont dentition (all the teeth are the same shape), while Blanus gracilis as heterodont dentition (the teeth are different shapes). Blanus mendezi is larger than Blanus antiquus, and has heterodont dentition. 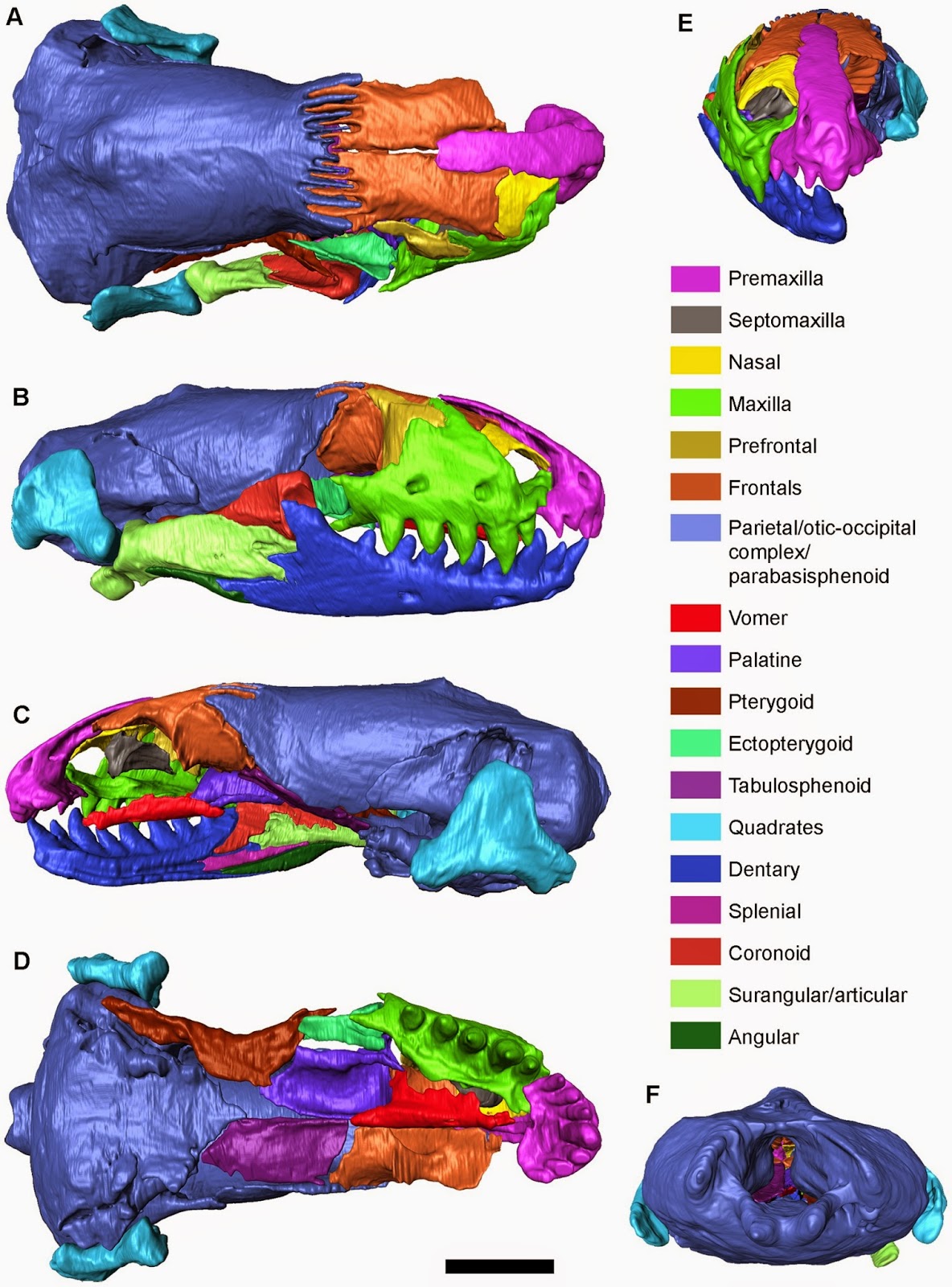 Fossil Amphisbaenians are known in Europe from the Palaeocene onwards, though most of the known material is fairly fragmentary. No Palaeocene or Eocene specimens can be placed in any modern group with confidence, and it is likely that they belong to either extinct lineages, or predate the differentiation of modern Amphisbaenian groups. The single species of Palaeoblanus, Palaeoblanus tobieni, which is known from the Miocene of Germany and Miocene of Germany, France, Italy and Spain, was described originally from fragmentary material, and not assigned to any family. Bolet et al. consider that on the material available now this species should be placed within the Blanidae.

Genetic studies of extant members of the group have suggested that the two Iberian species (Blanus cinereus and Blanus mariae) and two North African species (Blanus mettetali and Blanus tingitanus) are each most closely related to the other species in their geographical region, and all are more closely related to one-another than to the east Mediterranean Blanus strauchi.

The extinct Palaeoblanus tobieni and Blanus antiquus have homodont dentition, while all other members of the group have heterodont dentition. Bolet et al. suggest that homodont dentition is the ancestral state within the group, and that the two homodont species predate the division into the modern geographical groups. Blanus gracilis closely resembles the modern Blanus strauchi, and Bolet et al. suggest that these two are more closely related to each other than to the other extant species or Blanus mendezi. Palaeoblanus tobieni, Blanus antiquus and Blanus gracilis all have wider distributions in Europe than any modern species, and Bolet et al. suggest that cooling climates since the Oligocene have led to the extinction of the Homodont forms and shrunken range of the surviving species. All modern Iberian and North African species appear more closely related to one-another than to the Miocene Blanus mendezi, suggesting that they have differentiated since this time (which is what would have been expected). 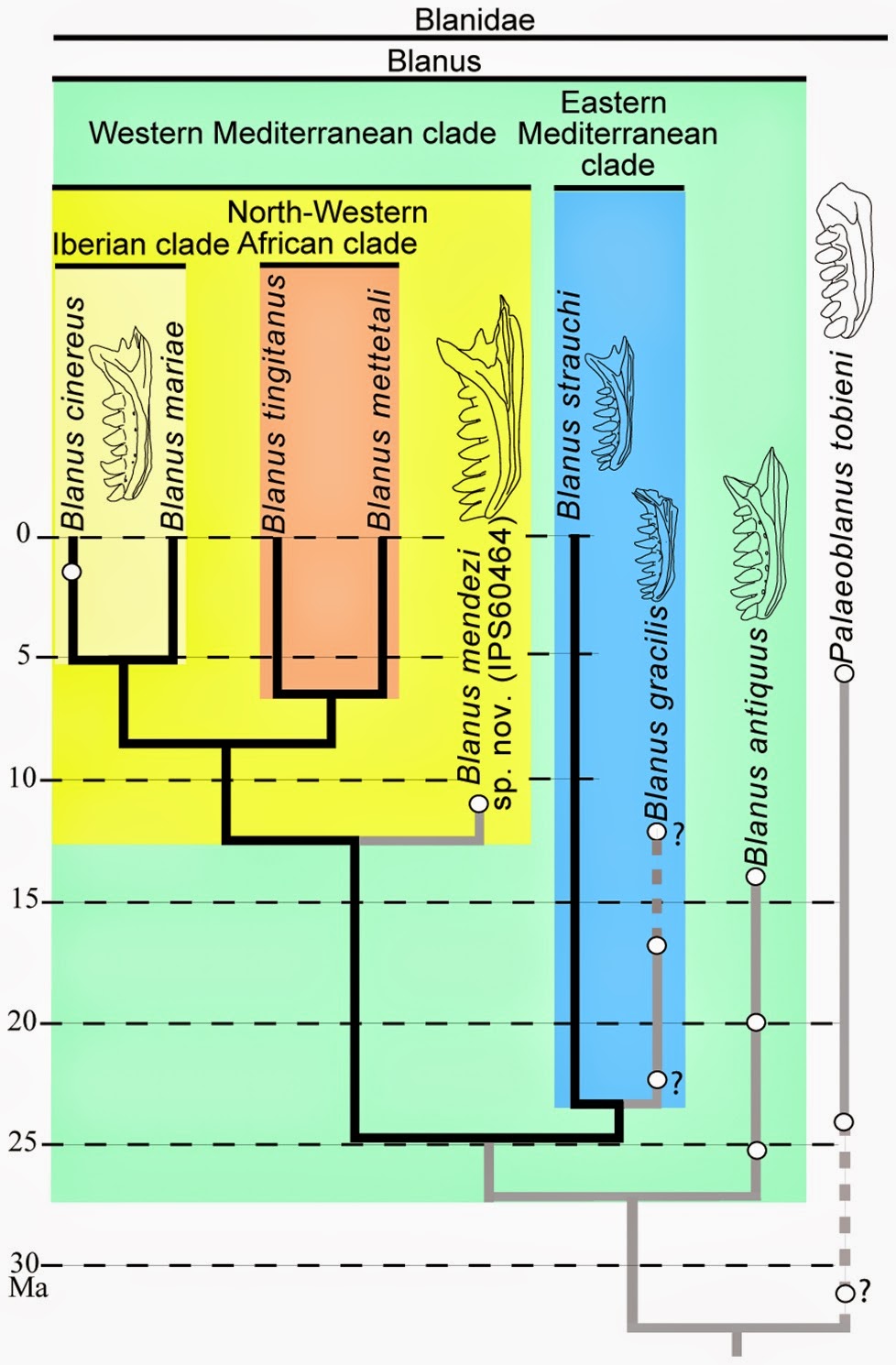 Evolutionary tree of the Blanidae based on molecular phylogeny, paleobiogeographic evidence and the paleontological data. Black branches depict the phylogeny and estimated divergence times for extant taxa based on molecular data; grey branches, in turn, depict inferred stratigraphic ranges (dashed when uncertain) based on fossil finds and divergence times, as well as the hypothesized branching order for extinct species, based on morphology and biogeography. Bolet et al. (2014).

A new species of Skink from southern New Caledonia.

Skinks are smallish lizards with elongate bodies and reduced legs and necks. They are an ancient and successful group, found throughout the tropical, subtropical and warm temperate regions of the world, though individual species (of which there are over 12 000) may be threatened. Skinks can either lay eggs or bear live young (depending on species) and can be divided into... 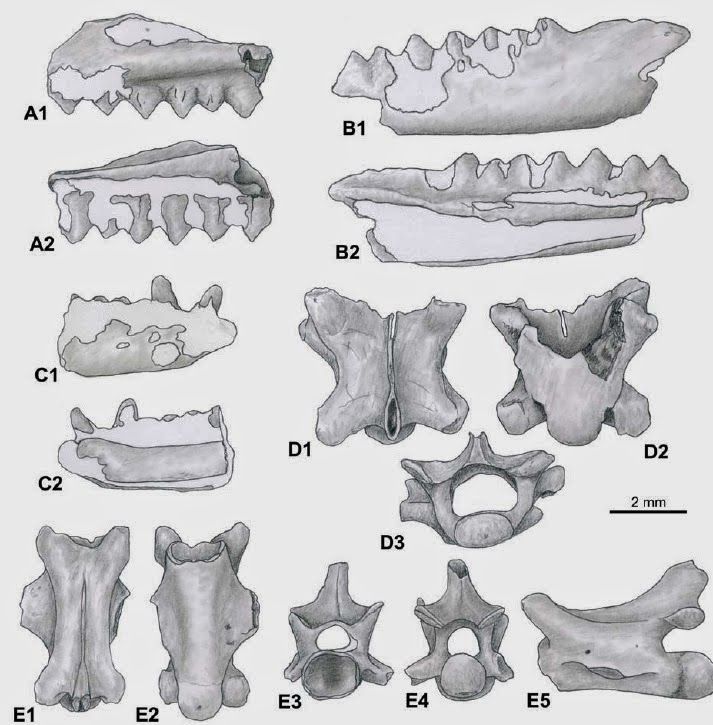 Agamid Lizard remains from the late Early Pleistocene of Spain.

Western Europe is thought to have had a diverse Squamate (Snake and Lizard) fauna during the Miocene, but to have largely lost this during the cooling climate of the Plio-Pleistocene, during which time Squamate groups are thought to have progressively disappeared. Varanid (Monitor) Lizards, Aniliid (False Coral) Snakes and Elapid... 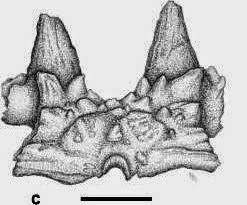 Lizards often have more restricted ranges and climatic tolerance than Mammals, making them useful in the study of ancient climates. Fowlkes Cave is a sinkhole in the Chihuahua Desert, roughly 10 km to the north of Kent in Cuthbertson County, Texas. It has a well...