The Malmani Dolomite to the west of Johannesburg and Pretoria is host to a large number of cave systems that have formed from about 5.3 million years ago onwards. These caves are noted for a large volume of fossiliferous material, including many Hominin (species more closely related to modern Humans than to modern Chimpanzees) fossils considered to be of great palaeoanthropolgical significance. However dating these deposits can be extremely difficult, due to extensive kartsification in the area.

Karstification is a form of erosion affecting exposed limestones, whereby water dissolution creates caves in the limestone, which then are filled in by eroded material (either from elsewhere or by collapse of the cave system, and frequently by a combination of the two), with new caves then forming which often partially overlap with previous caves. Over time non-limestone material (e.g. sandstone or siltstone layers) within the deposits are both concentrated and broken up to form breccias, while the limestone disappears, making accurate reconstruction of the original deposits extremely difficult.

The Haasgat Cave is located within the Monte Christo Formation in the Schurveberg Mountain Range, about 20 km to the northeast of the well-documented Sterkfontein, Swartkrans and Kromdraai cave systems. It was extensively worked by limestone miners in the early twentieth century, and recognised as a site of palaeontological importance in the 1980s, having produced a large number of Primate and hooved Mammal remains. The mining was carried out by artisanal miners looking for limestone for local building works. A large volume of flowstone, stalagmites and stalactites were removed, but left the original structure of the cave (floors, walls, ceilings) intact.

In a paper published in the South African Journal of Science on 27 March 2014, a team of scientists led by Andy Herries of the Australian Archaeomagnetism Laboratory of the Department of Archaeology, Environment and Community Planning at La Trobe University attempt to date the Haasgat Cave Deposits using a combination of biostratigraphic and palaeomagnetic methods.

The location of Haasgat within the Cradle of Humankind World Heritage site and its relation to other fossil sites mentioned in the text. Sites with larger font are Hominin-bearing sites (except Haasgat) and those with smaller font are vertebrate fossil sites. Herries et al. (2014).

Biostratigraphy uses fossils from sites with known dates to extrapolate similar dates for sites with similar fossils. This most commonly uses abundant microscopic fossils such as pollen or marine plankton, but for recent deposits larger Mammal species can sometimes be utilized.

The Haasgat cave has produced remains of two Zebra species, Equus capensis and Equus cf. quagga. Since the oldest known specimens of any Equus species on the African continent are from the Omo Shungura deposits, where they can be dated to between 2.27 and 2.19 million years old by isotope dating of volcanic layers above and below the fossil bearing strata, this is taken as an oldest possible age for the Haasgat Cave Equus specimens.

Taken together Herries et al.  conclude that these fossils indicate an age of between 2.3 and 1.98 million years old for the Haasgat Cave deposits. 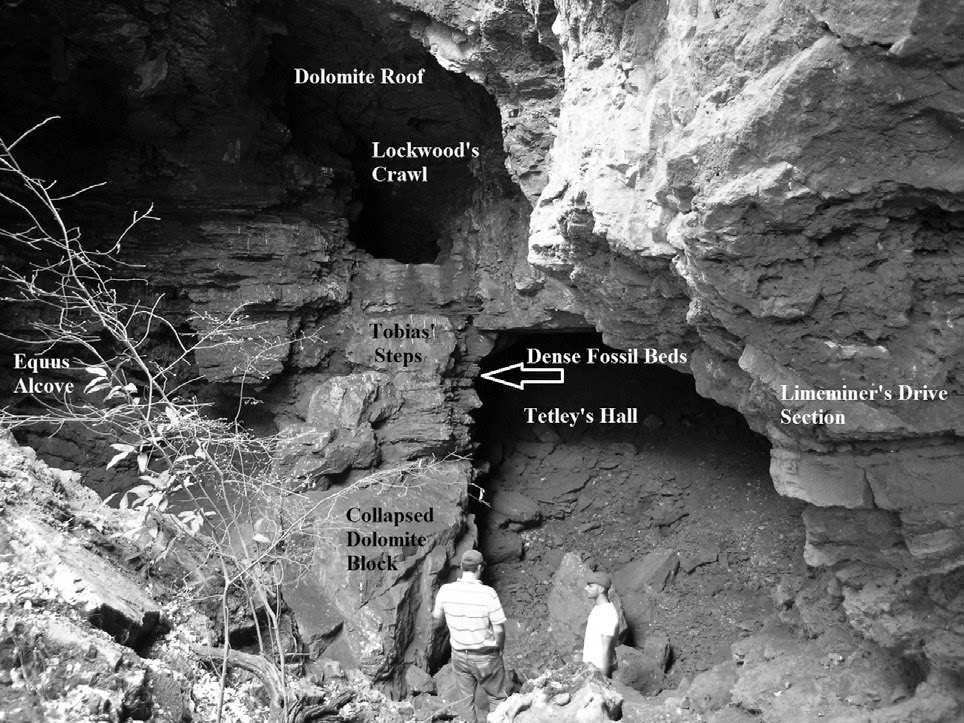 Major features of the Western Deposits of the Haasgat mine and its palaeocave deposits looking west from beneath the Bridge. Herries et al. (2014).

Palaeomagnetic dating relies on the fact that the Earth’s magnetic field undergoes periodic reversals to provide dates for strata. In deposits where iron rich minerals are able to settle slowly in liquids these will settle in alignment with the Earth’s magnetic field. Since this field reverses periodically, but irregularly, and these reversals have been mapped for many well dated deposits, these reversals can be used to date suitable deposits.

Before this can be done it is necessary to establish that the deposits being studied do in fact contain iron minerals that have settled in a liquid medium. In order to do this Herries et al. carried out X-ray fluorescence microscopy at the Australian Synchrotron in Melbourne, which established that the majority of iron minerals occurred in discrete horizontal bands within flowstone from the Haasgat  Cave. This suggests that deposition was periodic, probably coinciding with warmer, more humid periods with increased erosion. The iron-rich layers also show raised arsenic levels and are strontium poor, suggesting they are formed by the deposition of minerals released by dissolution of the dolomite. 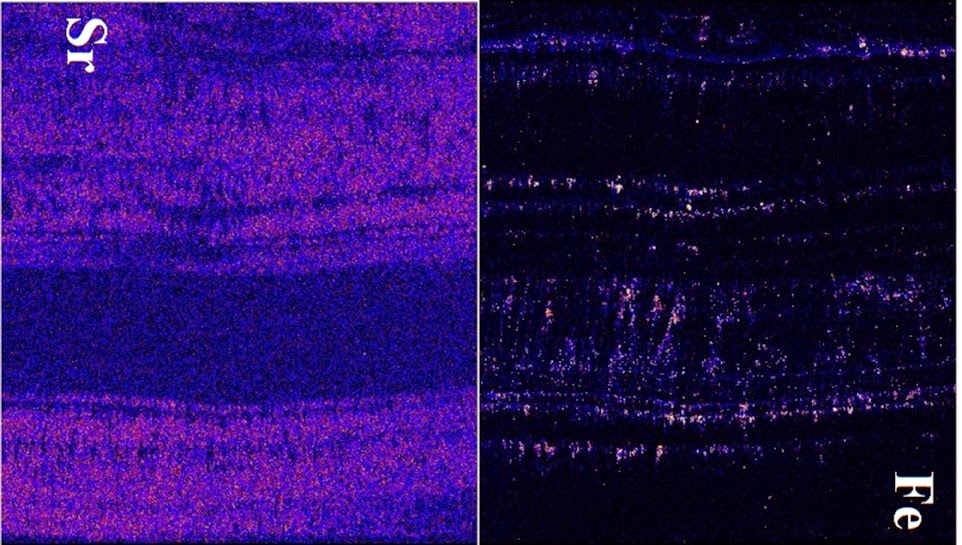 Synchrotron X-ray fluorescence microscopy data showing the negative correlation between iron (Fe) and strontium (Sr) in a flowstone at Haasgat. The Fe distribution (lighter in the figure) is dominated by the layering of the calcite in the flowstone and is likely detrital from flooding events between flowstone formation. However, it appears that some Fe also occurs along crystal growth boundaries between these laminated layers and may have been introduced into the flowstone during calcite formation. Areas of higher strontium are lighter. Herries et al. (2014).

The majority of the sampled flowstone in the Haasgat Cave appears to have been laid down in an extended period of reversed magnetic polarity, with the last of the material in a period of normal polarity. The reversed polarity material has a declination of 176–216° and inclinations between +50° and +64°, suggesting that the deposits have not moved greatly since they were formed (all rocks are laid down on the surface of a sphere, which palaeomagnitists try to orientate to a bar magnet running between the Earth’s poles; over time these rocks can be moved by uplift or subsidence, or the movement of the continents, making this task harder). 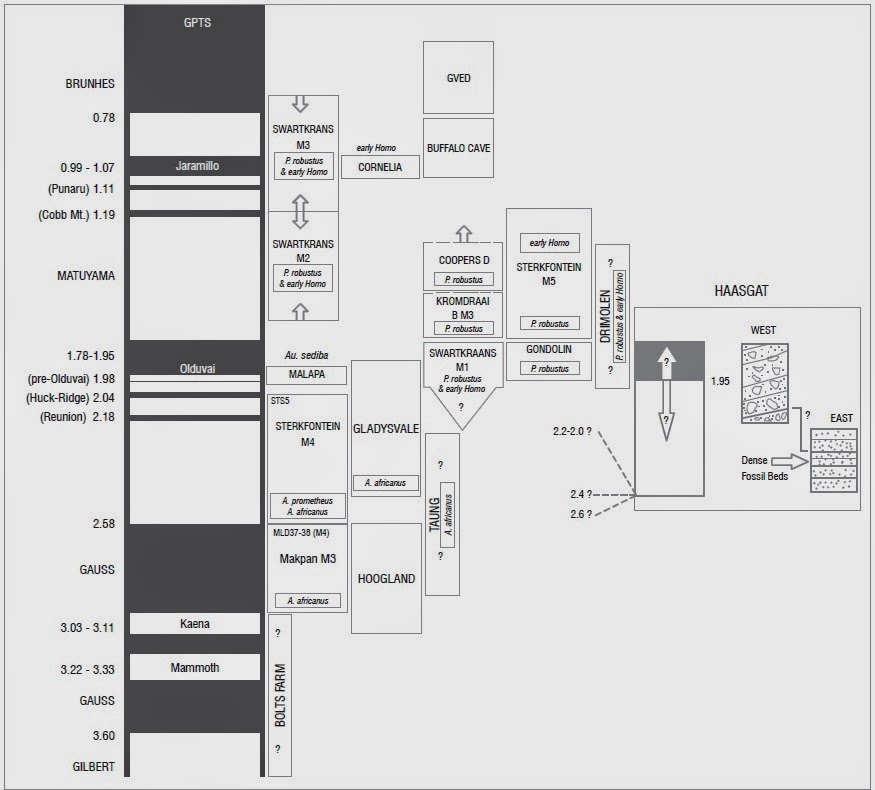 The age of Haasgat on the geomagnetic polarity timescale compared with other Hominin and Vertebrate fossil bearing sites. Herries et al. (2014). 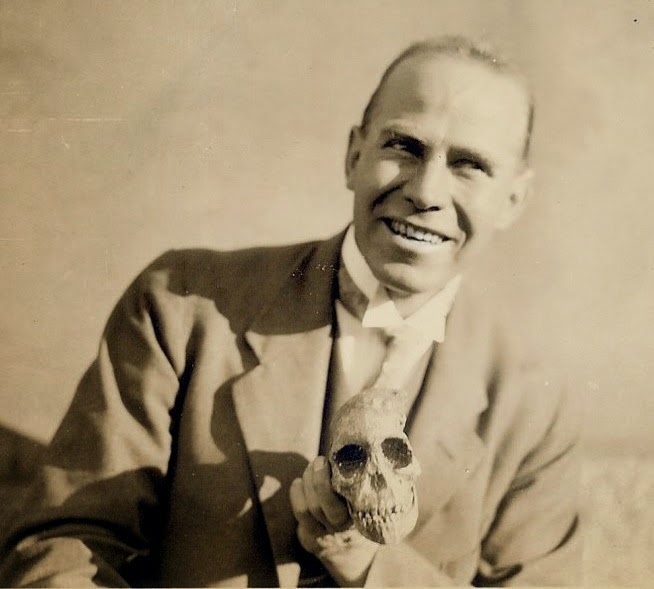 The first photographs of the Taung Child.

One of the most important breakthroughs in palaeoanthropology in the twentieth century was the discovery of the fossil known as the Taung Child, the first known specimen of Australopithecus, by Raymond Dart of the University of the Witwatersrand in South Africa in 1924. This discovery refocused efforts to find human...

A new species of Fox from the Pleisticene of Gauteng Province, South Africa.

Foxes (Vulpini) are a subgroup of the Dog Family, Canidae, found in North America, Eurasia and Africa (South American Foxes are a separate group, more closely related to True Dogs than to other...

Modern Hyenas are among the most highly specialized durophagous (adapted to eating tough food) Mammals ever to live, with powerfully constructed teeth and jaws and enlarged masticatory...