Volcanic activity on Nyamuragira and Nyiragongo volcanoes in Central Africa.

NASA's Landsat 8 satellite observed volcanic activity on the Nyamuragira and Nyiragongo volcanoes in the Virunga National Park, to the northeast of the city of Goma, on 30 June 2014. Iridescent lava lakes could be seen in the craters of both volcanoes, and a plume could be seen above Mount Nyamuragira. The two volcanoes are about 11 km apart and extremely active, Nyamuragira having last erupted in 2012 and Nyiragongo in January this year, and both are considered to be extremely dangerous due to their tendency to produce rapid flowing lava flows. 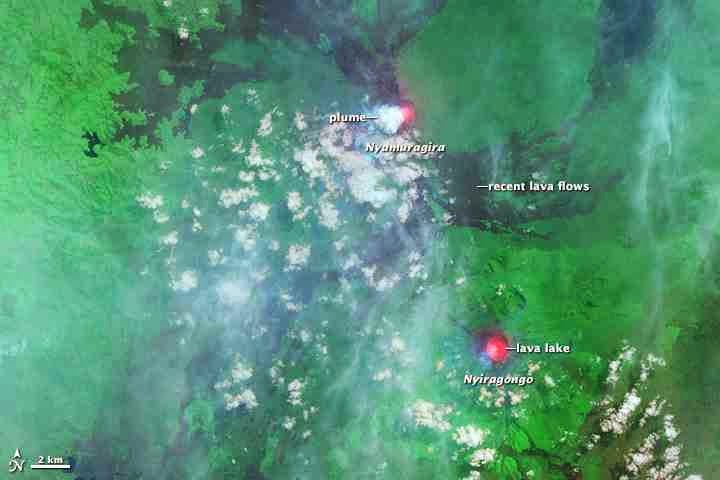 Nyamuragira and Nyiragongo account for 40% of all volcanic activity on the African continent. They produce a low silicone basalt. This tends to have a very low viscosity, i.e. it flows very freely, rapidly covering a wide area. Because of this few people choose to live near the mountains, so they are seldom a threat to human life, though it has in the past caused problems for vulnerable wildlife populations, such as the human-familiarized chimpanzees and gorillas of Virungu National Park.

Nyamuragira and Nyiragongo lie on the Eastern Branch of the East African Rift; most volcanoes in this area produce more typical siliclastic lavas, but there are several other basaltic volcanoes in the area, such as the less active Visoke, which last erupted in 1957, and the inactive Karasimbi, Mikeno and Muhavura volcanoes. The Western Branch of the Rift Valley also has basaltic volcanoes, most notably Ol Doinyo Lengi, to the south of Lake Natron in Tazania, the worlds only active carbonitic volcano (i.e a volcano that produces lavas containing carbonate compounds), and the nearby extinct, but dramatic, Mount Shombole.

The East African Rift is slowly splitting the African Plate in two along a line from the Red Sea through Ethiopia, and which includes the great lakes and volcanoes of east-central Africa. This has the potential to open into a new ocean over the next few tens of millions of years, splitting Africa into two new, smaller, continents; Nubia to the west and Somalia to the east. 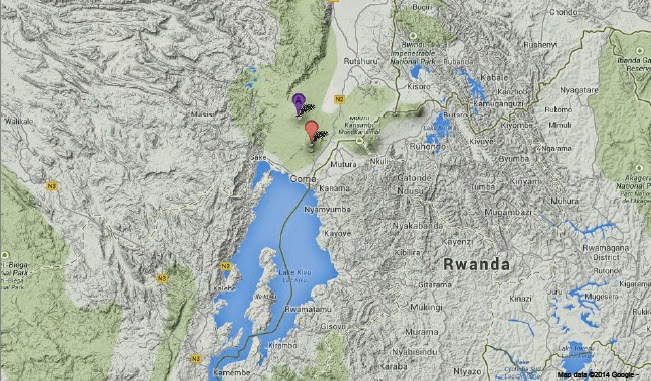 The locations of Nyamuragira (purple) and Nyiragongo (red). Google Maps.

Eruptions from Nyamuragira and Nyiragongo also tend to be unusually rich in Sulphur Dioxide (SO₂), with the volcano producing a large proportion of all the volcanic SO₂ that enters our atmosphere. To give this a sense of proportion, about 75% of all the SO₂ entering our atmosphere originates from the burning of fossil fuels. The effects of SO₂ in the atmosphere are a little complicated. Firstly it is poisonous, though this is only a danger close to the source where it is concentrated. Since most people avoid going close to active volcanoes, this usually only presents a hazard to professional volcanologists. Secondly it mixes with water to form sulphuric acid, i.e. acid rain, which can be a major problem downwind of volcanic eruptions and large industrial centers, with the rain causing severe damage to vegetation and aquatic life. Thirdly SO₂ droplets act as coolant. Since both volcanic and industrial SO₂ is usually produced alongside larger quantities of Carbon Dioxide (CO₂), which is a greenhouse gas, this is usually a negligible effect, but cooler weather can be produced downwind of major eruptions, as the CO₂ disperses more rapidly than the SO₂. 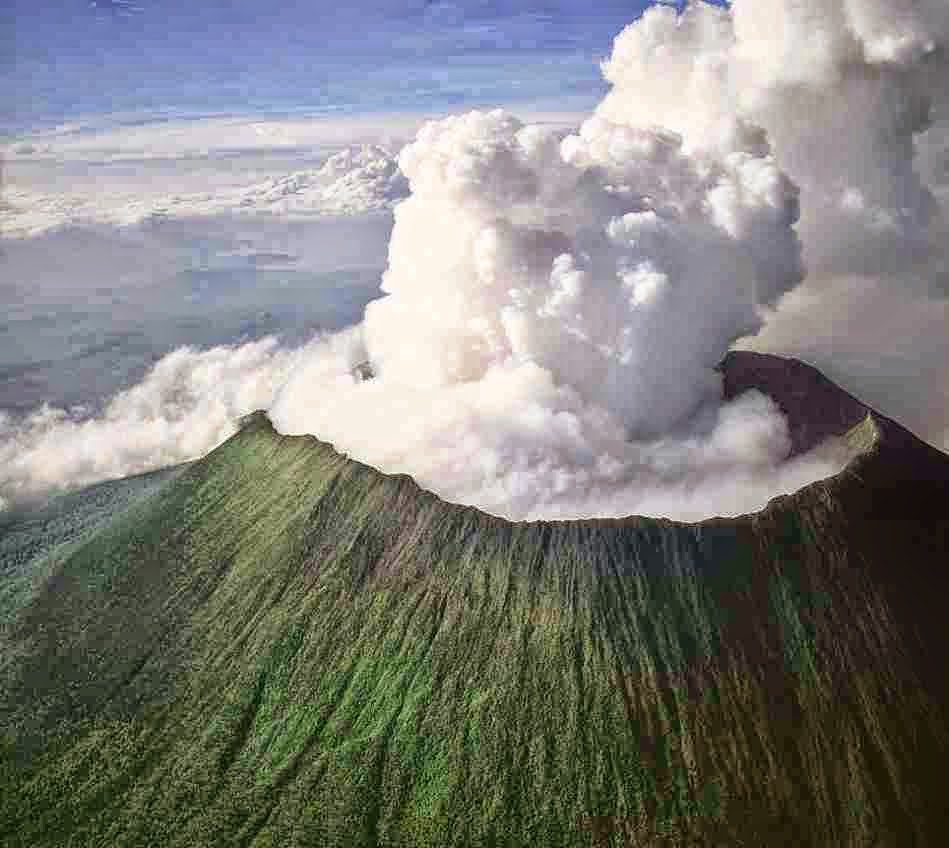 The Volcanic Observatory of Goma have issued a warning of a possible impending eruption on Mount Nyamulagira, an active volcano close to Mount Nyiragongo in the Virungu Mountains of eastern Democratic Republic of Congo, about 25 km to the north of...

The movement of deep magma beneath the Afar Depression.

The Afar Depression lies at at northernmost end of Africa's Great Rift Valley, where it meets the sea at the junction between the Red Sea and the Gulf of Aden. All three of these features are areas of...