A new species of Mamenchisaurid Sauropod from the Late Jurassic of Chongqing.

The Mamenchisaurids are a unique group of Sauropods found only in Asia, and thought to be indicative of the isolation of that continent during much of the Jurassic. They arose of a more diverse Sauropd fauna in the Middle Jurassic, and are the only group present in the Late Jurassic, being replaced by Titanosaurs in the Early Cretaceous. However well preserved Sauropod skeletons from the Late Jurassic of Asia are rare, with all known Sauropod specimens being assigned to a single genus, Mamenchisaurus, making it unclear if there was a wider diversity of Sauropods not recorded in the fossil record, a low diversity population genuinely all belonging to a small number of closely related species, or a wider range of Sauropods erroneously assigned to a single group.

In a paper published in the Journal of Vertebrate Paleontology on 26 January 2015, a group of scientists led by Lida Xing of the School of the Earth Sciences and Resources at the China University of Geosciences, describe a new species of Mamenchisaurid from the Late Jurassic Suining Formation in the Qijiang Petrified Wood and Dinosaur Footprint National Geological Park in Chongqing Municipality in South China.

The new species is named Qijianglong guokr, where ‘Qijianglong’ means ‘Qijiang-dragon’ and ‘guokr’ means ‘nutshell’, honouring the Guokr Science Social Network for their support of palaeontology in Qijiang. The specimen comprises the skull roof, the braincase, the right pterygoid, fragments of the right antorbital elements, the right postorbital and right quadrate; a complete cervical series, the thoracic dorsal series and the distal caudal series, numerous fragments of neural arches, numerous rib fragments; numerous hemal arch fragments, the left pubis and a pedal phalanx.

While Qijianglong guokr is clearly a Mamenchisaurid it is distinctive enough to merit its placement in a separate genus, indicating that this group were indeed more diverse in the Late Jurassic. It also shows a number of features that indicate the group spit off quite early in the history of the Sauropods as a whole, and underwent considerable convergent evolution with other large members of the group. Xing et al.  suggest that a more comprehensive review of the group might be usefull. 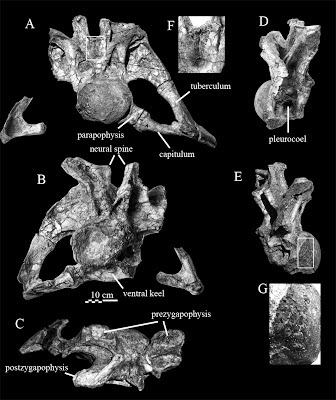 A Mamenchisaurid Sauropod Dinosaur from Thailand.
The Mamenchisaurids are a group of Sauropod dinosaurs known from the Late Jurassic and Early Cretaceous of China. Their taxonomy is not well understood, but they are distinctive in a number of ways from Sauropods in other parts of the world, which (along with studies on other groups) is taken as evidence that China was separated from other land-masses during this time.