The outer disk of T Chamaeleontis.

T Chamaeleontis is a T Tauri star (a very young star which has not yet began to generate heat by hydrogen fusion, but which produces considerable energy through gravitational heating) estimated to be about 7 million years old, roughly 350 light years from Earth in the constellation of Chamaeleontis. It is known to be surrounded by two transition disks (disks of dust and gas surrounding very young stars, thought to be associated with planet formation), with a possible substellar companion (planet or brown dwarf) between the two. The inner disk is known to extend from 0.13 to 0.17 AU from the star (i.e. 0.13-0.17 times the distance at which the Earth orbits the Sun), while the outer disk has proved harder to analyse, though it is thought either to comprise either a very compact disk of material at about 40 AU, or a more diffuse disk reaching from 40-80 AU but with a very steep density gradient and most of its mass close to its inner surface.

In a paper published in the journal Astronomy & Astrophysics on 15 February 2015 a team of scientists led by  Nuria Huélamo of the Centro de Astrobiología at the European Space Agency Center in Villanueva de la Cañada describe the results of a study of the outer disk of T Chamaeleontis using the Atacama Large Millimeter Array in Chile, which looked specifically for the molecules CO (carbon monoxide), 13CO (carbon monoxide molecules in which the carbon molecule is the Carbon-13 isotope), CS (carbon sulphite – check) and SO2 (sulphur dioxide). This is possible because all molecules will absorb light energy at a range of frequencies, but can only absorb so much before they must emit it again, which occurs at a specific set of frequencies for each molecule (this is why sodium lights are orange, neon lights are red and the sky is blue – the colour of nitrogen), enabling astronomers and astrophysicists to look for specific molecules in distant objects.

The CO, 13CO and CS molecules were detected in the disk, but SO2 was not found. The CO content of the disk appeared to stretch to a distance of 230 AU from the star, considerably more than has been previously suggested, which the 13CO molecule was found at distances of up to 170 AU and CS at 100 AU.

Integrated emission maps of the CO(3–2), ¹³CO(3–2), and the CS(7–6) transitions (from left to right). The black contours represent the continuum emission at 850 μm at 5, 15, 30, 45, 60, 75, 90, and 110σ where 1σ is 0.7 mJy beam¯¹. We detect two emission bumps separated by 40 AU and an outer dust radius of 79 AU. The white ellipses are the synthesized beams for the spectral emission lines and the green ellipse is the synthesized beam for the continuum map. The white dashed line in the left panel represents the axis where the position–velocity has been obtained. Huélamo et al. (2015).

Huélamo et al. were also able to measure the velocity at which the molecules were moving towards or away from the Earth by measuring the Doppler shift on the light they emitted. This works because an object moving towards us catches up a bit with light it emits (the speed of light is fixed), compressing the light waves (making them closer together), which from our point of view makes them slightly more blue (blue-shifting, which indicates an object is coming towards us), while objects moving away from us stretch out the distance between waves (making them further apart) and making them slightly more red from our point of view (red shifting, which indicates an object is getting further away). The CO component of the disk was found to be moving at between -5.0 and 16.5 kilometres per second, the 13CO component at between -3.0 and -15.0 kilometres per second and the CS component at between 0.0 and 11.0 kilometres per second.

From this Huélamo et al. calculate that the outer disk is tilted at an angle of 67˚ from our perspective, and that it comprises an inner dusty portion reaching from 40 to 80 AU, but with most of its mass inside of 50 AU from the star, and an outer gassy portion which reaches 230 AU from the star. They further calculate that the rotation of this disk implies the star has a mass equivalent to about 1.5 times that of the Sun and is about 10 million years old. 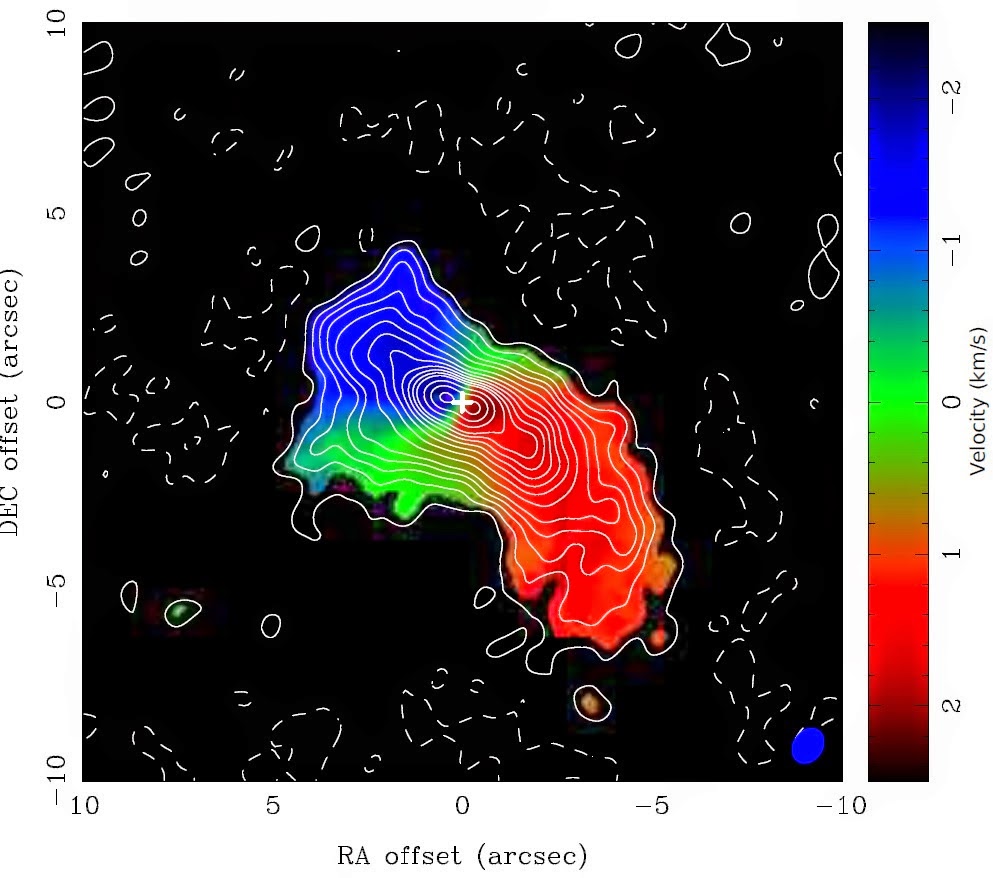 Protoplanetary disks around Class I Protostars in the ρ Ophiuchi Star Forming Region.
Stars are thought to form from the aggregation of material from vast clouds of molecules known as Stellar Nurseries or Star Forming Regions. The... 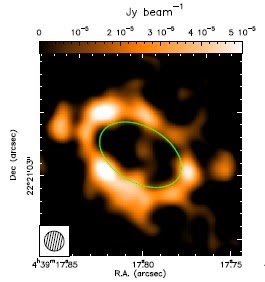 Searching for circumplanetary disks around LkCa 15.
Just as young stars are typically surrounded by a disk of material that is accreting onto the star as well as potentially coalescing to form planets (circumstellar or protoplanetary disks), comets and other bodies; young planets, particularly very large ones, ought in theory to be surrounded by smaller disks of material, accreting onto the planet and potentially coalescing to form moons...