Cobitis nanningensis: A fossil Loach from the Middle Oligocene of Guangxi Province, China.

Loaches, Corbitidae, are freshwater Cypriniform Fish related to Carp and Minnows, found across Eurasia and in parts of North Africa. They lack scales and are often vermiform (worm) shaped, and are inteligent and highly succesful omnivores, capable of feeding on plants, detritus, and a wide range animal prey. The oldest fossil Loach are known from the late Early Oligocene of Shandong Province in China, with Late Oligocene Loach known from Öhningen in Baden-Württemberg, Germany.

The species is placed in the extant genus Cobitis, which is found across much of Eurasia (including China) today, and given the specific name nanningensis, meaning 'from Nanning'; it is described from samples recovered from an exposure of the Yongning Formation exposed at the Liluo Coal Mine in Nanning City. Only the suborbital spines (spines beneath the eyes which can be expanded as a defence mechanism) are preserved, however these are structures found only in Loaches, and the closely related Botiids (False Loaches); the spines of the two groups are easily distinguishable, and can usually be used to identify a specimens to species level. The Yongning specimens appear distinct from any known species, which combined with its significantly earlier age leads Chen et al. to conclude the specimens can confidently be assigned to a new species. 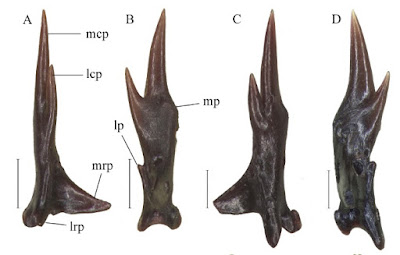 A new species of Minnow from southeast Turkey.