Mushrooms of the genus Helvella were first described by Linnaeus in 1753, and have subsequently been recorded in many parts of the world, including many locations in China. These Mushrooms have a distinctive saddle-shaped cap, and tend to be white, grey or light brown in colour, with heavily ribbed stipes (stems).

The new species is named Helvella sublactea, in reference to its similarity to the European species Helvella lactea, for which it had previously been mistaken. The new species resembles the European species closely both in appearance and habitat preference, although the distribution of the two species is seperated by several thousand miles, and it was neccessary to cary out a DNA analysis in order to establish that the Chinese population was in fact a separate species, and not closely related. 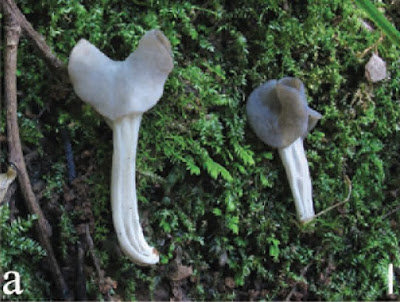 Helvella sublactea has a white or light grey sadle-shaped cap 1-2.5 cm high and up to 3.5 cm across, held on a stipe 3-8 cm in length. It is found on the ground in Oak and Chestnut forests at high altitudes in Yunnan and possibly other provinces of South China. 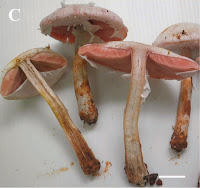