Seismic activity and fumerol (gas) emissions are well established as predictors of eruptions on stratovolcanoes (volcanic mountains which undergo repeated eruptions), but predicting eruptions in other kinds of volcanoes is more problematic. Monogenetic fields are areas of volcanic activity where sporadic eruptions occur at different locations, rather than at a single site. Most such sites only suffer very irregular eruptions, but the fields are often home to hot spring systems or other features which make them attractive to humans, leading to settlement in potentially hazardous areas, making finding a method for predicting eruptions in these areas a priority.

In a paper publishd in the journal Geology on 5 February 2016, Helena Albert of the Central Geophysical Observatory at the Spanish Geographic Institute, Fidel Costa of the Earth Observatory of Singapore and Asian School of the Environment at the Nanyang Technological University and Joan Martí of the Institute of Earth Sciences Jaume Almera, discuss a number of historic eruptions at a number of different monogentic fields, with a view to understanding the processes driving volcanic activity at these sites and the possibility of predicting future eruptions in such areas. 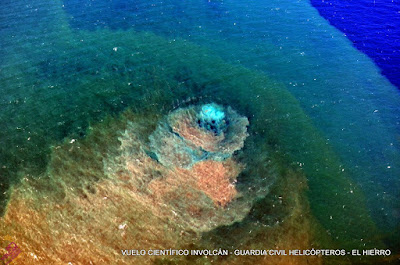 Emissions from the 2011 El Hierro eruption, which happened offshore to the south of the island. Guardia Civil.

Of these, only the 2011 El Hierro eruption was monitored with high quality modern seismic equipment, with three others having lower quality records available. However witness accounts of earthquakes provide insight into seismic activity in all of these fields prior to the onset of eruptive activity. All of the eruptions were proceded by periods of seismic activity, with the longest such recorded period preceding the 2011 El Hierro eruption, where tremmors were recorded 4-5 years ahead of the eruption, and the shortest being the 1973 Heimay Island eruption, where seismic activity was only noticed 2 days before the main eruption.

Lava flow from the 1973 Heimay Island eruption which entered the town of Vestmannaeyjar, destroying about half of the homes there and causing the population to evacuate to the Icelandic mainland. Will Perry/The Reykjavík Museum of Photography.

Albert et al. next looked at samples of erupted lava from all of the eruptions except the 1943 Goropu Mountains eruption and the 1989 Higashi-Izu eruption. In each case they found that the lavas were mineralogically mixed, that is to say included minerals thought to come from different magmatic intrusions. Magma extruded from deep within the Earth is thought to be more-or-less entirely liquid, however if it becomes trapped in chambers close to the surface (5-15 km underground) it cools foming a mush with crystals suspended in a liquid matrix. Different minerals are formed at different temperatures, and larger crystals form more slowly (implying the mush has remained cool enough for the crystals to form but hot enough for the matrix to remain liquid for a longer period of time), giving each magmatic intrusion its own distinctive makeup. Lavas with mixed compostitions contain crystals which cannot have formed in a single intrusion.

Ruins of the San Juan Parangaricutiro Church which was destroyed by the 1943 Michoacan eruption. Sparks Mexico/Wikipedia.

From this Albert et al. conclude that each of these volcanoc fields is fed by a an extensive shallow plumbing system with an extensive system of dykes at mid-crustal levels recieving intermittent intrusions of deep magma. While a full understanding of the processes behind this is beyond the scope of this study, the majority of these eruptions were preceded by a rise in seismic activity which began months to years before the main eruptive episodes, giving the potential for the prediction of such eruptions using dedicated seismic monitoring networks. 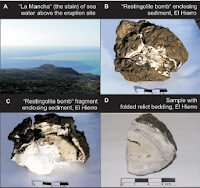 The floating stones of El Hierro.               When volcanic activity began off the south coast of El Hierro, in the Canary Islands, in October 2010, it led to the production of large plumes of pumice-like rocks that floated on the surface of the ocean, producing a distinctive volcanic 'stain'. Pumice is a volcanic rock which contains large vesicles (sealed, gas filled cavities) which cause it to float on the water, which is formed by superheated magma coming...

Earthquake of the coast of El Hierro.           On Friday 29 March 2013, slightly after 5.00 pm GMT, the United States Geological Survey recorded a Magnitude 4.6 Earthquake at a depth of 17.3 km, roughly 30 km southwest of El Hierro in the Canary Islands...
Follow Sciency Thoughts on Facebook.