Teyujagua paradoxa: An Archosauromorph from the Early Triassic of Rio Grande do Sul State in Southern Brazil.

The Archosauriformes, the group which includes the Birds, Dinosaurs, Crocodilians, and Pterosaurs, are thought to have first appeared during the Middle Permian, and rose to dominate global terrestrial faunas during the Triassic. However, despite over a century of intense study by palaeontologists, the origins of the group remain somewhat obscure. The earliest known fossils assigned to the group come from the Late Permian of Russia, though these are fragmentary in nature and yield little information, as are most of the Early Triassic fossils from around the world.

The new species is named Teyujagua paradoxa, where 'Teyujagua' refers to Teyú Yaguá, a mythical beast from the mythology of the Guarani people, traditionally depicted as a Dog-headed Lizard, and 'paradoxa' means 'paradoxical', in reference to the unusual and unexpected combination of features seen in the specimen. The species is described from an almost complete skull and four cervical (neck) vertebrae, 115 mm in length, still partially covered by the surrounding rock matrix in some areas. 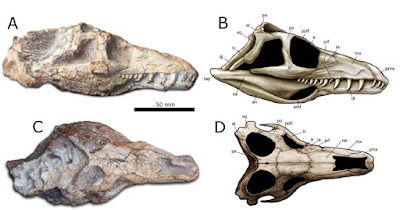 Teyujagua paradoxa has a flattened snout with nostrils on its upper surface, a feature seen in many Crocodyliforms (advanced Archosauriformes) and also in Rhynchosaurs, an Archosauromorph group thought to be closely related to the Archosauriformes. The skull has a greatly reduced pineal foramen (skull opening between the eyes), the loss of which is also associated with Archosauriformes (it was fonerly thought that all Archosauriformes lacked a pineal foramen, though some early members of the group have new been shown to have a small opening). Teyujagua paradoxa has trapezoidal infratemporal openings which are bordered bellow by incomplete lower temporal bars, a situation seen in a variety of non-Archosauriforme Archosauromorphs, though it is more common in groups less cloesly related to the Achosuariformes.

The teeth of Teyujagua paradoxa are set in well defined sockets (as in Mammals and some early Archosauromorph groups), rather than growing from the directly from the bone (a trait that allows the constant replacement of teeth seen in Crocodyliforms and Dinosaurs) as in early (and most subsequent) Archosauriformes. Teyujagua paradoxa also shows heterodont dentition (the development of different sized and shaped teeth in different parts of the jaw), a trait common in Mammals and other Cyndonts (the larger group from which Mammals arrose, and only very distantly related to the Archosauromorphs), but only seen in a few highly specialized advanced Dinosaurs. 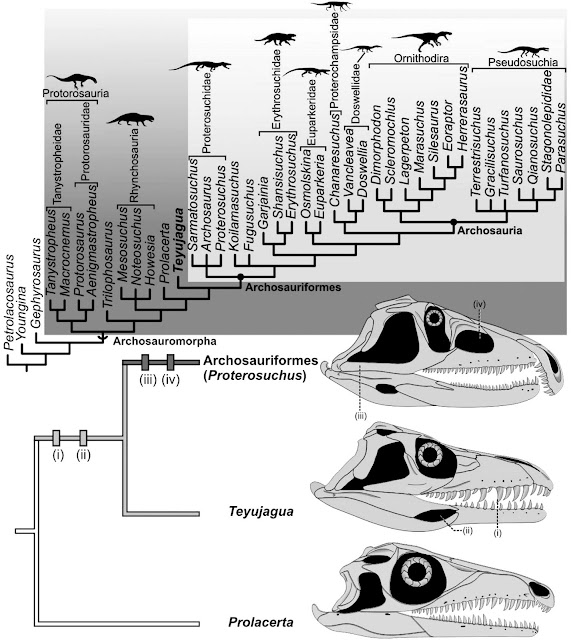 Bone pathology in a Triassic Phytosaur. Palaeopathology is the study of disease and injuries in fossil remains. The way in which an organism responds to infection can tell biologists a lot about its ecology and lifestyle, and this is more true of palaeobiologists...