Coprosma cordicarpa: A new species of Pilo from Hawai‘i.

Pilos, Comprosma spp., are fruiting plants related to the Coffees, Coffea spp., found on Pacific islands from Borneo to the Juan Fernández Islands, with the maximum diversity occuring in New Zealand, where there are 55 recorded species. Pilos range from trailing woody shrubs to small trees, and produce a berry-like fruit with two seeds. These fruits are sometimes eaten (particularly the larger ones), and occasionally used to make a Coffee-like drink. The leaves of some Pilos give off a dung-like smell when crushed.

The new species is named Coprosma cordicarpa, meaning 'heart-shaped fruit, inreference to the shape of the berries. Coprosma cordicarpa is a shrub reaching 2-7 m in height. It was found growing on thesouthern slopes of Haleakalā (East Maui) volcano, with five separate populations between 1000 and 2000 m above sea-level, streteched ut in a rough line 21 km in length from the Kanaio Natural Area Reserve in the eastto the Kaupō Gap Trail in the west. 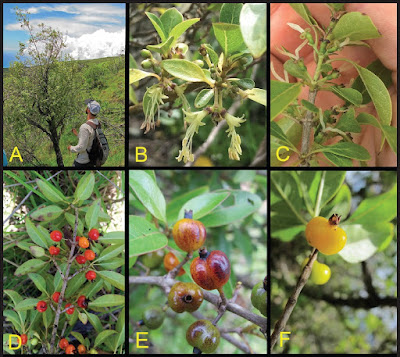 Due to the low numbers of Coprosma cordicarpa observed, and its scattered distribition over a very limited range, in an area where much of the environement has been degraded by invasive, introduced animals (particularly Goats) and plants (particularly Kikuyu Grass), leads Cantly et al. to conclude that Coprosma cordicarpa should be considered to be Vulnerable under the terms of the International Union for the Conservation of Nature’s Red List of Threatened Species.

Sommera cusucoana: A new species of Sommera from Honduras.                    Sommeras are tropical shrubs or small trees belonging to the Rubiaceae (the same group as plants as Coffee) found in tropical rainforests and occasionally dry Oak forests in Central and South...