Comet C/2016 U1 (NEOWISE) will reach its perihelion (the closest point on its orbit to the Sun) on Saturday 14 January 2017, when it will be approximately 0.32 AU from the Sun (i.e. 32% of the distance between the Earth and the Sun, inside the orbit of the planet Mercury). At this point it will also be at about its closest to the Earth, at a distance of 1.14 AU (1.14 times as far from us as the Sun). The comet will only be separated from the Sun by a distance of  15° seen from Earth (the entire sky, envisioned as a sphere around the Earth, being 360°), meaning that it is invisible from the Earth without fairly specialised viewing equipment (and attempting to view it with most amateur telescopes would be highly dangerous). 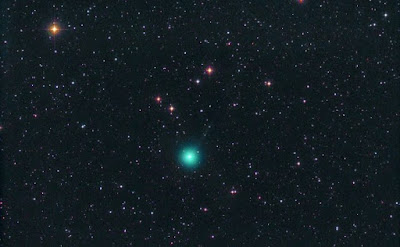 Image of C/2016 U1 (NEOWISE) seen taken from Jauerling in Austria on 23 December 2016. Michael Jäger/Universe Today.

C/2016 U1 (NEOWISE) has an unknown period and a highly eccentric orbit that takes it from 0.32 AU from the Sun at perihelion (32% of the distance between the Earth and the Sun) to an unknown outer orbital point, somewhere beyond the Kuiper Belt, in the Oort Cloud. It is considered to be a hyperbolic comet, an object from the Oort Cloud (or possibly even the interstellar space beyond), that has been nudged onto a trajectory that takes it through the Inner Solar System by an encounter with another Oort Cloud body or possibly the gravity of another star or other extra-Solar System object. Such comets are not expected to make return visits to the Inner Solar System, but rather are thrown out of the Solar System altogether by a gravitational slingshot caused by their close encounter with the Sun. 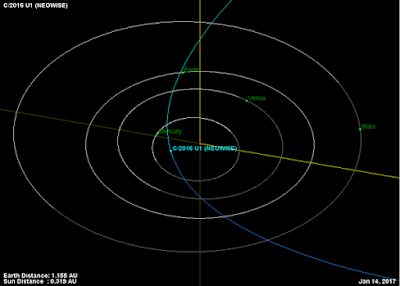 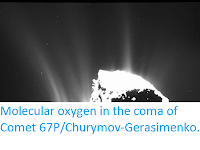 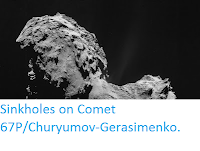 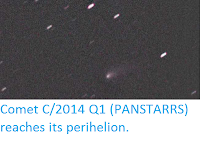 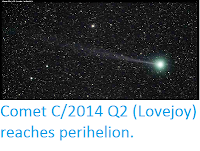