The United States Geological Survey recorded a Magnitude 4.8 Earthquake at a depth of 22.4 km in Mendoza Province, Argentina, at about 6.30 am local time (about 9.30 am GMT) on Saturday 21 January 2017. There are no reports of any damage or injuries relating to this event, but people have reported feeling it in the cities of Mendoza and San Rafael. 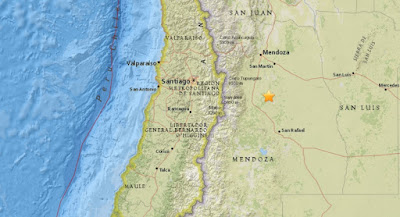 The approximate location of the 21 January 2017 Mendoza Earthquake. USGS.

The subduction of the Nazca Plate beneath the South American Plate, and how it causes Earthquakes and volcanoes. Pacific Earthquake Engineering Research Center.

This means that Earthquakes, even large events, are quite common in the area, but since the province is on the eastern margin of the Andes, such quakes usually happen at considerable depth (the margin between the Nazca and South American plates is angled downwards, so that maximum seismic activity happens close to the surface on the coast of Chile and deep within the Earth beneath eastern Argentina), so that much of the energy from the quake is dissipated before it reaches the surface. 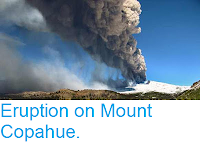