Extreme Trans-Neptunian Objects are Outer Solar System bodies with orbits that never bring them closer to the Sun than 30 AU (i.e. 30 times as far from the Sun as the Earth), and an average distance from the Sun of greater than 150 AU. The first of these objects, (148209) 2000 CR105, was discovered in 2000, since when a total of 21 have been found. Curiously these bodies not appear to orbit in the plane of the Solar System, but rather follow highly eccentric orbits that are consistent with having been thrown from this plane by encounters with a large, undiscovered body, a body that has been referred to as Planet 9 or Planet X.

In a paper published on the online arXiv database at Cornell University Library on 10 January 2017, and submitted for publication in the Monthly Notes of the Royal Astronomical Society, Julia de León of the Instituto de Astrofísica de Canarias and the Departamento de Astrofísica at the Universidad de La Laguna, and Carlos and Raul de la Fuente Marcos of the Universidad Complutense de Madrid describe the results of a study of the visible spectra of two Extreme Trans-Neptunian Objects, (474640) 2004 VN112 and 2013 RF98, made with the OSIRIS camera-spectrograph at the 10.4 m Gran Telescopio Canarias.

(474640) 2004 VN112 was discovered on 6 November 2004 by the ESSENCE Supernova Survey using the 4 m Blanco Telescope at Cerro Tololo International Observatory. The  name 2004 VN112 implies that 2813th asteroid (asteroid N112) discovered in the first half of November 2004 (period 2004 V), while the longer designation 474640 implies that it was the 474 640th asteroid ever discovered. It is estimated to be between 130 and 300 km in diameter, and has an orbit calculated from 31 observations made over a period of fourteen years. This orbit is calculated to take 5629 years and is tilted at an angle of 26°, taking the asteroid from 47.3 AU from the Sun at its closest out to 586 AU from the Sun at its furthest. It is calculated that an object of this size in an orbit of this nature would be visible to the ESSENCE survey for only 2% of its orbit, which suggests that a significant number of similar asteroids could be awaiting discovery.


2013 RF98 was discovered on 12 September 2013 by the Dark Energy Camera on the Blanco 4-meter Telescope at the Cerro Tololo Inter-American Observatory in La Serena, Chile. The designation 2013 RF98 implies that it was the 2456th asteroid (asteroid F98) discovered in the first half of September 2013 (period 2013 R). It is estimated to be between 50 and 120 km in diameter, and has had an orbit described from 38 observations made over a period of 56 days. This orbit is calculated to take 6527 years and be tilted at an angle of 30°, taking the asteroid from 36.1 AU from the Sun at its closest out to 662 AU at its farthest.

These objects are considered to be part of the Scattered Disk, objects sufficiently distant from the Sun that they are not influenced by tidal forces exerted by the eight known planets. Nevertheless both objects are tilted strongly from the Plane of the Solar System, which implies that they have had their orbits perturbed by the influence of some large body, one of the pieces of evidence that led astronomers to propose that an undiscovered ninth planet may be present in the Outer Solar System. These orbits are not only inclined to the Plane of the Solar System, they are very similar, leading de León et al. to speculate that these bodies might share a common origin.

De León et al. calculated that the spectral slope for 474640 is 12±2 %/0.1 μm and that of 2013 RF98 is 15±2 %/0.1 μm. As with the orbital parameters, these are not identical, but are very similar (to give some comparison the Trans-Neptunian Dwarf Planets Eris, Pluto, Makemake and Haumea have spectral slopes in the range 0–10 %/0.1 μm, while Sedna has a spectral slope of 26-42 %/0.1 μm). This suggests these objects have surfaces with variety of pure ices (water, methane, carbon dioxide etc.) as well as carbon and possibly amorphous silicates, but not complex organic molecules. 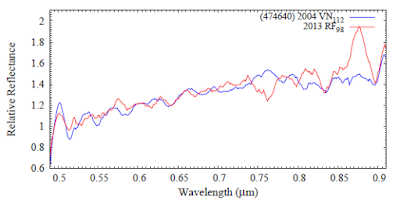 Given the similarities between the orbits and spectra of the two objects, de León et al.conclude that the two bodies are likely to share a common origin. They therefore consider two possibilities; that the two bodies are the result of a single object breaking up close to perihelion (when bodies are at their closest to the Sun, and receiving their most heat and tidal stress from it), or that they were a single object or binary asteroid (i.e. two asteroids orbiting one-another) torn apart by repeated tidal stresses from an encounter with a larger body.

In order to test the second hypothesis, de León et al.used a computer model, which was run several thousand times with varying parameters, in order to work out the most likely scenarios for such an encounter. They conclude that the most likely scenario would be one where the parent body of the two objects repeatedly encountered a planet with a mass 10-20 times that of the Earth on an orbit with an eccentricity of up to 40% (an orbit in which it is 40% closer to the Sun at its closest than at its furthest), inclined to the Plain of the Solar System by 20-40°. Such a planet could cause a binary asteroid pair of weekly consolidated asteroid to break apart and nudge the parts onto the observed orbits due to repeated encounters over a period of 5-10 million years. 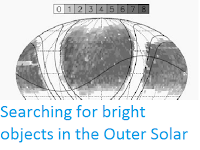