Asteroid 2017 BH30 passed by the Earth at a distance of 51 8500 km (0.18 times the average distance between the Earth and the Moon, 0.035% of the average distance between the Earth and the Sun), slightly after 4.50 am GMT on Monday 30 January 2017. There was no danger of the asteroid hitting us, though had it done so it would have presented no threat. 2017 BH30 has an estimated equivalent diameter of 3-10 m (i.e. it is estimated that a spherical object with the same volume would be 3-10 m in diameter), and an object of this size would be expected to explode in an airburst (an explosion caused by superheating from friction with the Earth's atmosphere, which is greater than that caused by simply falling, due to the orbital momentum of the asteroid) in the atmosphere more than 32 km above the ground, with only fragmentary material reaching the Earth's surface. 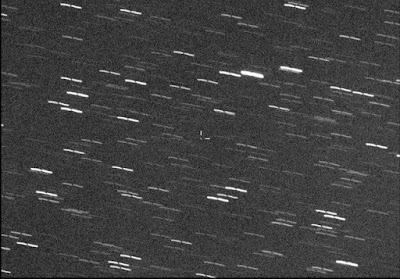 Image of 2017 BH30 taken on 29 January 2017 from Ceccano in Italy. The asteroid is the point in the centre of the picture, indicated by the two lines. The longer lines are stars, their elongation being caused by the telescope tracking the asteroid over the length of the exposure, in this case 60 seconds. Gianluca Masi/Virtual Telescope.

2017 BH30 was discovered on 29 January 2017 (the day before its closest encounter with the Earth) by the University of Arizona's Catalina Sky Survey, which is located in the Catalina Mountains north of Tucson. The designation 2017 BH30 implies that it was the 258th asteroid (asteroid H30) discovered in the second half of January 2017 (period 2017 B).
2017 BH30 has a 1297 day orbital period and an eccentric orbit tilted at an angle of 1.88° to the plane of the Solar System, which takes it from 0.81 AU from the Sun (i.e. 81% of he average distance at which the Earth orbits the Sun) to 3.84 AU from the Sun (i.e. 384% of the average distance at which the Earth orbits the Sun, and considerably more than twice the distance at which the planet Mars orbits the Sun). It is therefore classed as an Apollo Group Asteroid (an asteroid that is on average further from the Sun than the Earth, but which does get closer). This means that close encounters between the asteroid and Earth are extremely common, with the last having occurred in January 2007 and the next predicted in May 2024. 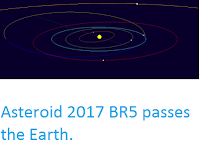 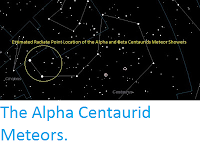