Muricea subtilis: A new species of Octocoral from Costa Rica.

Octocorals of the genus Muricea are found in shallow coastal waters along the tropical and subtropical coasts of North, Central and South America, from California to Peru and possibly Chile in the East Pacific, and from North Carolina across the Caribbean to Brazil on the Western Atlantic. Most species are found in shallow waters from the intertidal zone to depths of about 30 m, though a few species are known from deeper waters, such as Muricea midas, which was found on the North Coast of South America at a depth of 201 m, Muricea fruticosa, which has been found at depths of 102 m off the coast of California and Muricea galapagensis, which was recorded at a depth of 94 m in the Galapagos.

In a paper published in the journal ZooKeys on 7 November 2016, Odalisca Breedy of the Centro de Investigación en Estructuras Microscópicas and Centro de Investigación en Ciencias del Mar y Limnología at the Universidad de Costa Rica and the Smithsonian Tropical Research Institute and Hector Guzman, also of the Smithsonian Tropical Research, describe a new species of Muricea from the Pacific coast of Costa Rica.

The new species is named Muricea subtilis, meaning ‘slender’ or ‘thin’, in reference to the thin, spiny branches of the species. Colonies are white or pale yellow, roughly fan shaped with irregular, usually dichotomous branching (branching by repeatedly splitting in two). The species was found on muddy sand at depths of between 30 and 54 m. 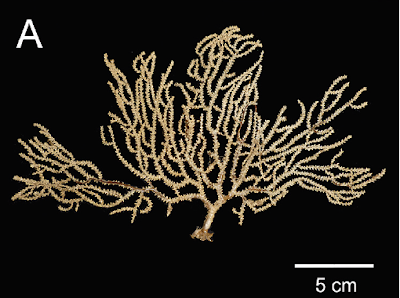 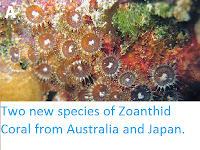