The United States Geological Survey recorded a Magnitude 4.5 Earthquake at a depth of 60.3 km roughly 5 km to the southwest of the town of Cevicos in Sánchez Ramírez Province in the Dominican Republic, slightly after 9.00 pm local time on Sunday 26 February 2017  (slightly after 1.00 am on Monday 27 February GMT). There are no reports of any damage or injuries associated with this event, but people have reported feeling it across much of Hispaniola (the island upon which Haiti and the Dominican Republic sit). 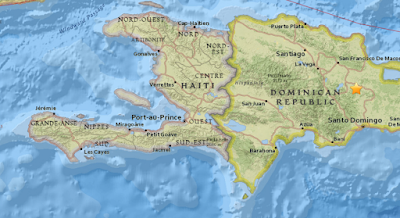 The approximate location of the 26 February 2017 Dominican Republic Earthquake. USGS.

The Dominican Republic forms the eastern part of the island of La Hispaniola, in the Greater Antilles. The island has a complex geological structure, with parts of it lying on three different tectonic plates, and two plate margins running east-to-west across the island. The northernmost part of the island lies on the North American Plate. This is divided from the Gonâve Microplate by the Septentrional Fault Zone, which runs through Rio San Juan, along the north coast of the Dominican Republic and Haiti, then across the Windward Passage and along the south coast of Cuba. The Gonâve Microplate is moving east relative to the North American Plate, pushed by the Mid-Cayman Spreading centre to the west of Jamaica. To the south the Gonâve Microplate is separated from the Caribbean Plate by the Enriquilo-Plantain Garden Fault Zone, which runs across Southern Haiti and the Dominican Republic. To the west the fault runs through central Jamaica. The Caribbean Plate is rotating clockwise, effectively moving east relative to the Gonâve Microplate. 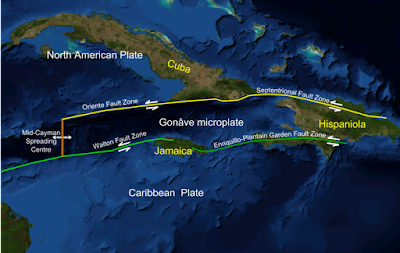 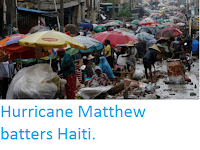 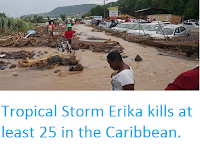 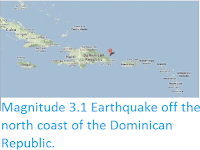